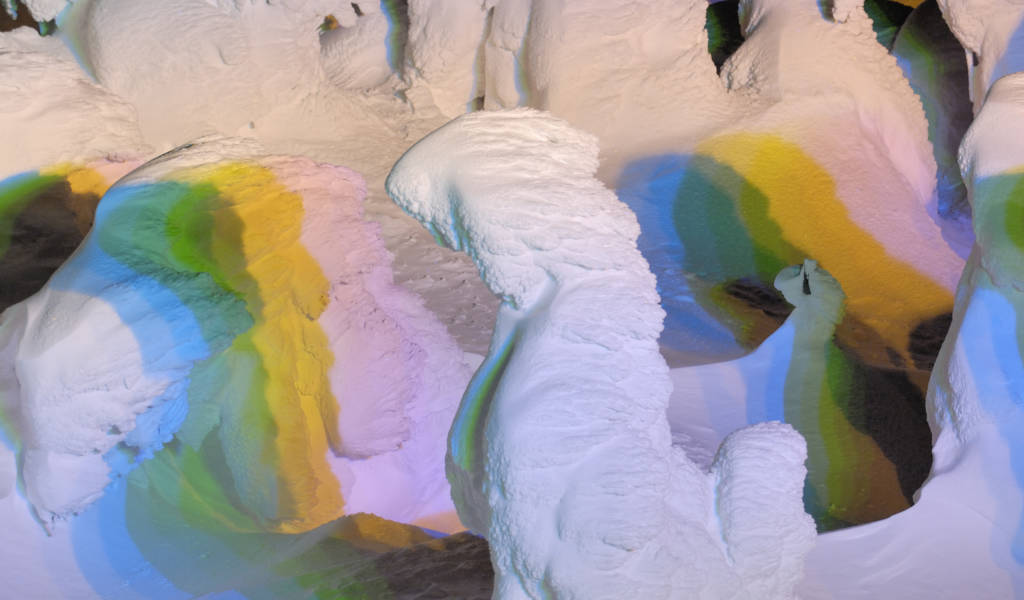 While most snow festivals feature man-made sculptures, the snow monsters of Zao — called juhyo in Japanese — are entirely natural, created in rare circumstances that require specific weather and tree formation (namely freezing cold Siberian winds). The trees are swept sideways catching snow in such a way that they are transformed into hulking monsters on the mountainside. The snow monsters can be seen for months during winter, but February is the peak time as they begin to melt in March.

With incredible views from the rope-way and plenty of skiing opportunities, you can get your monster fix pretty easily. The hills are illuminated in the evenings throughout February (and Friday through Sunday in January), and the resorts offer night snowmobile tours to see them. The festival weekend includes a parade of skiers gliding down the mountain with glowing torches in each hand as well as mascots and fireworks displays on the Saturday evening

The monsters are illuminated in the evenings from late December to late February.

On Saturday, February 4 from 8 p.m., you can watch as around a thousand skiers and snowboarders make their way down the Uenodai Slope carrying LED lights as they slide and jump through the air. Mascots follow and the event ends with an impressive firework display. There will also be fireworks on January 14 and 15 after the Women’s Ski Jumping World Cup.

From Tokyo you can travel for just under 3 hours to reach Yamagata — either via Sendai Station or direct (covered on the JR Pass). From Yamagata, catch a bus to Zao Onsen Bus Terminal which costs ¥1,000 each way and takes 40 minutes. The line runs roughly each hour. Full timetable here.