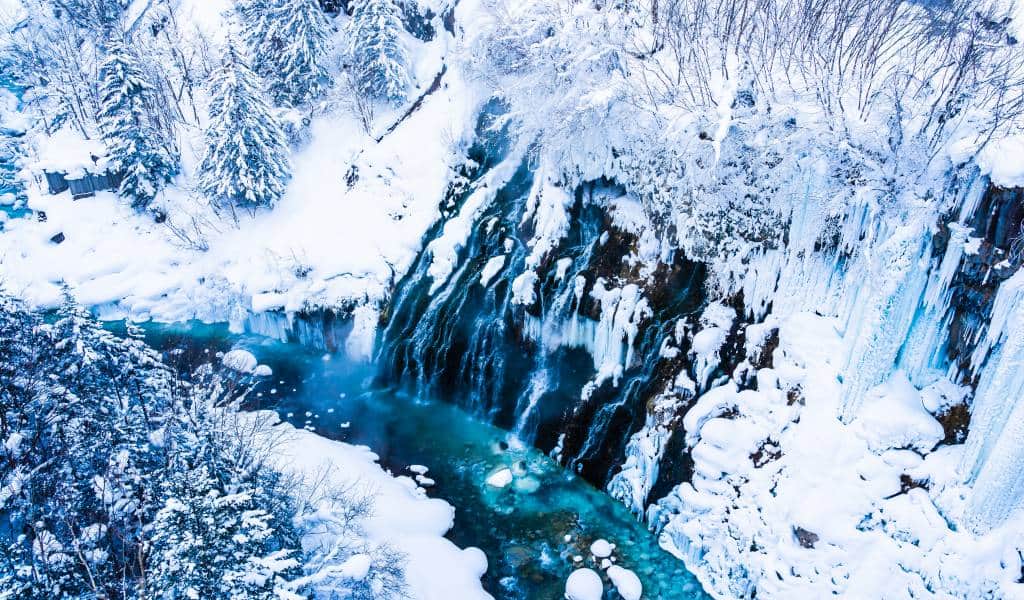 10 Natural Wonders in Japan to Visit in Winter

You have a small window of time for visiting winter natural wonders in Japan — so don’t miss out! All across the country these natural wonders come to life when temperatures drop below freezing.

If you’re visiting in the warmer months, see our article on 12 natural wonders to visit in the summer.

Late January through February
Yamagata, Tōhoku (about 4 hrs from Tokyo)

Halloween may have come and gone, but Zaō’s eerie snow monsters only emerge in winter. They’re found on mountainsides in the area of Zaō Onsen Ski Resort in Yamagata prefecture.

The “monsters” — called juhyō in Japanese — are created by wind blowing against the ice and snow that gathers on the mountain’s fir trees. See them at the resort via the Zaō Ropeway. February is the peak viewing month; they begin to melt by March. In the evenings, the snow monsters are lit up by colorful illuminations, casting them with an ethereal glow.

Zaō Snow Monster Festival takes place every year on a weekend, usually in late January or early February. The event features a parade with mascots and skiers gliding down the mountain holding glowing torches and a fireworks display on the Saturday evening.

Mid-January through February
Abashiri, Hokkaidō (about 90 mins from Sapporo)

Every winter, an expanse of drift ice makes its way from Russia’s Amur River to northeastern Japan. Eventually it reaches the Okhotsk Sea, along the coast of Abashiri City and the Shiretoko Peninsula in Hokkaidō. The ice floe (called ryūhyō in Japanese) arrives in mid-January and can last until March (and sometimes stick around until April).

There are several ways to experience this natural wonder, including walking tours (on the ice!), boat tours on an icebreaker ship, and even snow-shoeing treks if you’d prefer to admire it from a distance. For something a little more tame (and warm), visit the Okhotsk Sea Ice Museum of Hokkaidō. There you can learn all about the drift ice, its route, and the area’s flora and fauna. They also have an observation room and a dome theater where visitors can experience how Okhotsk changes throughout the four seasons.

Every February there is a drift ice festival in Abashiri featuring snow sculptures of all sizes that are illuminated in the evenings.

To get to Abashiri, it’s best to plan ahead. You can fly into Memanbestu Airport from either Tokyo (starting from ¥10,000, 2 hours) or Sapporo (starting from ¥6,000, 45 minutes), and then take a bus into Abashiri (¥0, 35 minutes). The JR Okhotsk limited express train from Sapporo costs ¥7,370 one-way and takes about 5 hours and 30 minutes. You can get discounted return tickets called R-Kippu for ¥17,940; otherwise, both the Hokkaido Rail Pass and Japan Rail Pass fully cover the journey.

Take a short train ride north of Tokyo to neighboring Saitama prefecture to see the Misotsuchi icicles. During winter, spring water solidifies and forms icy curtains on the surface of the rock wall. The best time to visit is mid-January to mid-February when the temperature is at its lowest.

There is an annual Otaki Ice Festival, during which the icicles are illuminated in the evening on weekends and national holidays, creating one of the most beautiful winter sights in Saitama. The area is open from 8 a.m. to 5 p.m., however on illumination days, closing hours are extended into the evening.

A one-way trip takes about 2.5 to 3 hours from central Tokyo. Take the Seibu Chichibu or Seibi Ikebukuro line to Seibu Chichibu Station, and then transfer to the Seibi Kanko Bus for Mitsumine-jinja. The icicles are about a 10-minute walk from the Misoba bus stop. If you’re traveling from Shinjuku or Ikebukuro stations via a Seibu line consider picking up a Seibu One-Day Pass to save on the train fare.

All winter
Nagano (about 4 hrs from Tokyo)

Macaque monkeys ensconced in a steamy natural hot spring is the quintessential image of winter in Japan. With the exception of humans, macaques live farther north than any other primate in the world. At Jigokudani Monkey Park in Nagano prefecture, visitors can get up close (but not so personal as they are indeed wild animals) all year round — however, the winter season is especially picturesque. Snow is possible from December through March but peaks in January and February. While the monkeys are on their own schedule, park employees do feed them daily, so you’ll likely get a good view of them bathing at those set times.

See our guide to the Jigokudani Monkey Park for visitor info, how to get there from Tokyo, and details on the Snow Monkey 2-Day Pass. There are also some great tours that take you to the Monkey Park, including this special winter tour that also includes a visit to Zenkōji to see the Winter Illumination Festival.

November through April
Biei, Hokkaidō (about 2 hrs from Sapporo)

The town of Biei, home to the famous Shirogane Blue Pond and expansive flower fields, has another natural wonder to add to its list of extraordinary sights: Shirahige Falls. In winter, the icy blue views will woo even the most cold-adverse among us.

While the waterfall is lit up year-round, the snowy winter atmosphere makes things even more romanatic. Hours vary throughout the year, but typically the lights are turned on around dusk until 9 p.m.

Nearby is a blue pond (called Aoi-ike), which is also illuminated from November to April (again from dusk to 9 p.m). There is a special bus that will take you on a 3-hour tour to visit both the waterfall and the pond (among other stops) on weekends and holidays. It costs ¥3,000 for adults and ¥1,500 for elementary-aged children (it’s free for children under the age of five). The tour starts at the Biei Tourist Center. See the Biei Tourism site for more details. Alternatively, this tour includes travel to Shirahige Falls, Shirogane Blue Pond, and Asahiyama Zoo.

All winter
Yamanashi and Shizuoka prefectures (about 2 hrs from Tokyo)

Mt. Fuji is Japan’s most famous natural landmark. In summer, hordes of hikers climb to its peak for heavenly views. But a snow-covered Fuji in winter — what a beaut! The colder season is the perfect time to step back and take in its entirety.

Plan a day trip to the Kawaguchiko area to see its stoic reflection in the lake. Alternatively, if you’re an experienced hiker, you may want to consider a winter hike up a nearby mountain, like Mt. Mitsutōge or Mt. Akadake, for phenomenal views of Mt. Fuji. There are also lots of different day tours you could join, depending on your interests.

For access information see our guide on traveling from Tokyo to Mt. Fuji.

All winter
Aizu, Fukushima (about 4.5 hrs from Tokyo)

Take a ride across Tadami River Bridge No. 1 for soaring views of coniferous trees — their evergreen color disguised under a blanket of pristine white snow. Below, the frosty river glistens a cool jewel-tone blue. It’s romantic, it’s picturesque, so hop on the JR Tadami Line with bae and a camera to capture some winter wonderland memories.

If you’d rather get a view of the train against the wintry landscape, visit the No. 1 Tadami River Bridge Viewpoint.

Located in Fukushima, the two closest stations on either side of the bridge are Aizu-Nishikata Station (southwest of the bridge) and Aizu-Hinohara Station (northeast of the bridge). They are both on the JR Tadami line and it takes about 4 hours and 30 minutes by train to reach either one of them from Tokyo. Depending on where you transfer expect to pay about ¥8,900 to ¥10,000 one-way.

Note: A small section of the JR Tadami Line from Aizu-Kawaguchi Station (located just a few stations southwest of Aizu-Nishikata Station) that continues down toward Tadami Station is currently closed.

All winter
Daigo, Ibaraki (about 4 hrs from Tokyo)

High praise abounds for Ibaraki’s Fukuroda Falls. It’s designated as a Place of Scenic Beauty and one of Japan’s Top 100 Waterfalls. It’s also ranked as the third most beautiful waterfall in Japan (in good company with Kegon Falls and Nachi Falls).

The 120-meter-tall and 73-meter-wide waterfall is also known as Yado no Taki, meaning “four times falls,” referring to its four-level drop. In winter, due to its location in a basin, the temperature drops lower than the surrounding areas and the chutes freeze solid — as if the White Witch of Narnia had cast a bitter spell on them herself.

January and February
Nikkō, Tochigi (about 2.5 hrs from Tokyo)

Adventurers wanting a winter hiking experience can look to Unryū Keikoku, or “Cloud Dragon Valley,” in Nikkō. In January and February, the many waterfalls of Unryū Keikoku freeze over, resulting in long, frozen pendants draped over the cliffside. The icy valley becomes an otherworldly winter wonderland, perfect for a frosty 5–6 hour hike. If you’re up for the challenge, make sure you have the right winter hiking gear before you head off.

The trailheads leading to Unryū Keikoku Waterfall are about a 20-minute drive from Nikkō Station. There’s no bus access though, so you either have to drive in the snow or find a taxi willing to take you. Read about getting from Tokyo to Nikkō here.

All winter
Fuji Five Lakes, Yamanashi (about 3 hrs from Tokyo)

Not too far from Lake Kawaguchiko in the Aokigahara Forest, at the northern base of Mt. Fuji, is the Narusawa Ice Cave. Visitors can walk the 1560meter route through the volcanic cave to see the naturally forming icicles, which exist year-round, but increase in size in the winter season. The average temperature in the cave is about 3°C (37°F), so be sure to bundle up.

Another option is to join a tour like this one that includes a trek through Aokigahara Forest and entry to both Narusawa Ice Cave and the nearby Fugaku Wind Cave.

While we do our best to ensure it’s correct, information is subject to change. Last updated in November 2022 by Maria Danuco.

Written by: Adriana Paradiso
Filed under: Things to Do
Tags:
Sharing