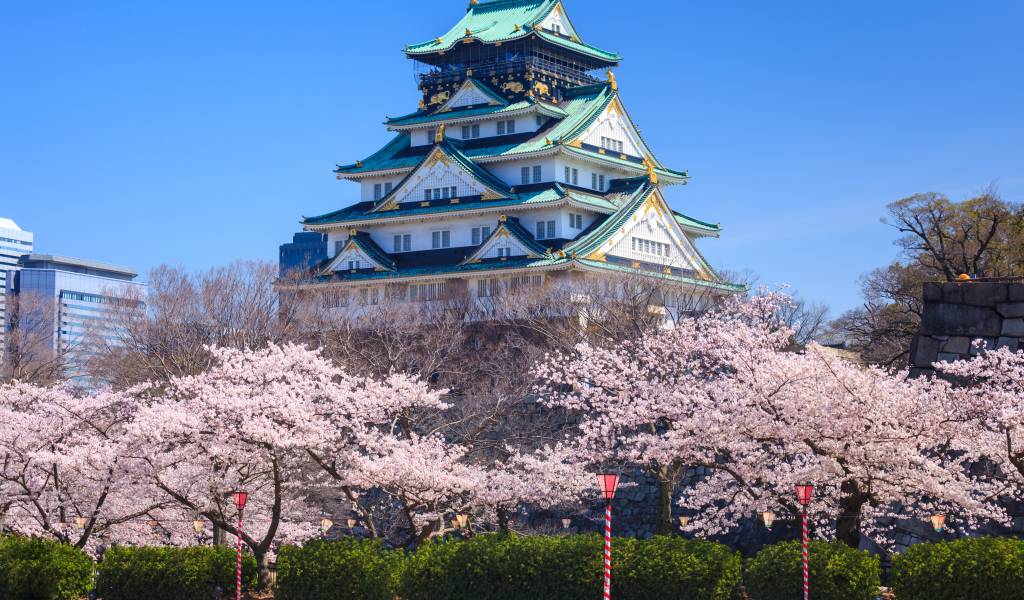 As Japan’s Kitchen, there are few better places than Osaka for the perfect hanami picnic. With spring in the air, here’s a round-up of the best spots to enjoy cherry blossoms in Osaka.

Osaka may not be as famously picturesque as its neighbor Kyoto, but the beauty of cherry blossoms can transform even the most urban of places into a seasonal wonderland. The gardens and parks of Osaka provide the most popular spots and, as a livelier city, you’ll find more blue tarps than you ever thought possible (plus plenty of beer to go with them).

According to the Japan Meterological, cherry trees will start to bloom around March 26th and be at peak bloom around April 2nd.

If you’re arriving a little later into April, be sure to visit the Japan Mint, which has free entry once a year for hanami and is largely late-blooming. As always, be sure to check the latest updates on the forecast, as it can change depending on the weather.

Note: Due to anti-coronavirus measures, events may be canceled at any time. Always check official sites on the day before attending an event.

A great place to start off your sightseeing, the Osaka Castle grounds are filled with over 3,000 cherry trees with plenty of room to get the perfect shot. In the west section, Nishinomaru Garden has super spots for a picnic thanks to the lawns stretching beneath the trees (other areas have hard ground). Entry for the garden is ¥200, however, while other areas are free.

There will be food trucks this year. Look for them around the Morinomiya entrance plaza (southeast corner) and at the southern entrance of the castle complex. The castle is illuminated at night during cherry blossom season.

Note: There will be no extended opening hours or illuminations in Nishinomaru Garden this year. Also, barbeques are prohibited.

If you’re looking to escape the city for a day, we suggest you head out to Daisen Park, a luscious 35-hectare park with a large Japanese garden. It have 400 cherry trees and plenty of space to enjoy them. There are a few varieties, including mountain cherry and Oshima, but all the flowers together create an impressive scene, especially near Dada Pond. The gardens have a tea house and plenty of other sights to explore, including Sakai Museum and a flower and water park. Note that the gardens are closed on Mondays.

From Osaka’s Tennoji Station you can catch the the Hanwa Line, getting off at Mozu Station. This journey takes around 30 minutes and costs ¥220.

Located on the river terrace between Kema Araizeki and Temmabashi Bridge, Sakuranomiya Park is a beautiful stretch of cherry blossoms that will take your breath away. Almost 5,000 trees line the edges of the Okawa River, and locals and travelers stroll along and admire the river banks from across the water. During the blossoming, you’ll find food stalls and hanami picnics galore — creating a festival atmosphere. This park is very close to the Japan Mint, so you can combine the two. 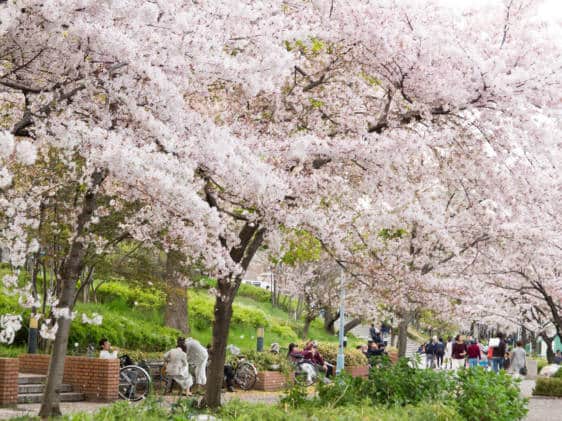 The Mint garden is usually closed to the public, but for one week during cherry blossom season, they open their gates and allow visitors to admire some rare and unusual varieties of blossoms. Note that this event requires online registration in advance.

There are 350 trees with 134 different varieties and it is an especially good spot for late-blooming trees like yaezakura. There is a tunnel effect, and it is one of the most picturesque spots in the city, with lanterns and an evening illumination. Surprisingly, entry is completely free — although if you were planning on visiting the Mint Museum, it is closed for the duration of the garden opening. No hanami picnics are allowed here, but you can head to nearby Kema Sakuranomiya Park.

Head to Temmabashi Station on the Tanimachi Line (you can change from the Midosuji or Osaka Loop Line easily), or direct from Higashiumeda, which is a short walk from Osaka Station. 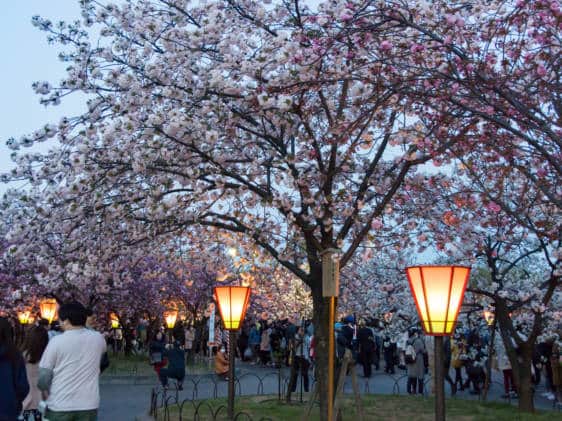 Also known as Bampaku Kinen Koen, this park was originally designed to host the 1970 World Exhibition. Famed for its seasonal flower displays and open spaces, this large park is 30 minutes from central Osaka. There are over 5,000 cherry trees spread across 260,000 square meters, mostly along paths and in the southeast section. Within the park, you’ll also find a Japanese landscape garden, artwork left over from the Expo and two cultural museums to explore.

As part of the park’s annual cherry blossom festival, held this year between March 19th and April 10th, two teahouses in the Japanese Garden normally off-limits to the public will be open on weekends. One of them will be selling matcha and a sweet sets. Otherwise the festival sounds rather un-festival-y this year, with the park asking visitors not to lay tarps. Opening hours will be extended slightly, to 6pm between March 25th and April 3rd, but there will not be illuminations.

Head to Bampaku-kinen-koen Station or Koen-Higashiguchi on the Osaka Monorail, it takes just under half an hour from Umeda.

Home to the famous Kishiwada Danjiri Matsuri, this castle was originally built in 1334 and has over 130 blossoming trees surrounding it. The gardens include remains of the original castle (the current one was rebuilt in 1954 after many fires/disasters/battles) and a stone garden designed to represent the fortification. Although the castle is around 25 minutes from Osaka central, it’s actually on the way to the airport, so you could make it your first or last stop off in the city.

This year, the castle will have extended hours and evening illuminations on April 1st–3rd and 8th–10th until 8:30pm. No parties please, says the castle website.

Catch the Nankai Airport Express from Namba Nankai Station and get off at Kishiwada — it’s a 26-minute journey costing ¥500. (Be careful not to catch the Nankai Limited Express, as that is only 6 minutes faster and costs ¥1,020). 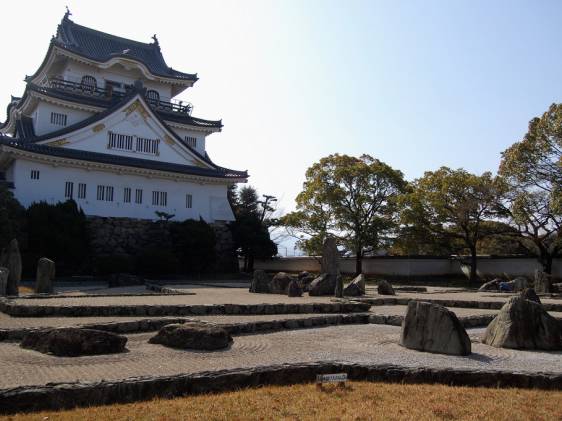 A large hilly park in northern Osaka, this park is well known for its open-air farmhouse museum and recreational pools as well as its cherry blossom. The park has over 10 ponds, a bamboo forest, an arboretum with over 700 species of camellia and sports facilities, too. The museum is a great chance to see the gassho-zukuri houses of Shirakawago if you haven’t been able to see them yet. For a more spacious blossom experience with some additional entertainment on the side, this can make for a great afternoon out in Osaka.

Note: The park is currently requesting people limit their gatherings to no more than four people.

Head to Ryokuchikoen Station on the Midosuji Line from Namba subway station — it takes 23 minutes and costs ¥380 each way. 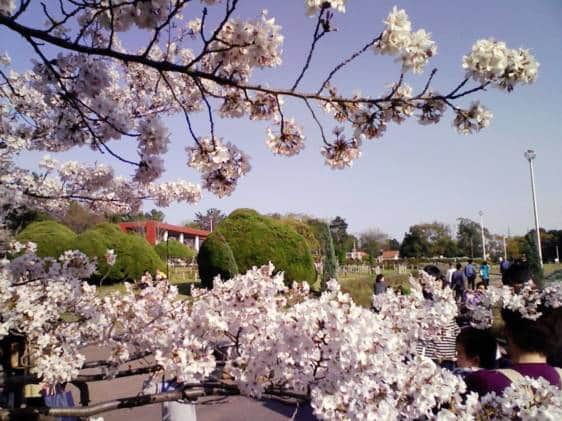 A different Ryokuchi Park, the Tsurumi version was host to the International Garden and Greenery Exposition in 1990 and thus has a great selection of flower displays, including cherry blossoms. The park is designed to have flowers in bloom during every season, so there are plenty of flowers to see aside from the cherry blossoms. Here, you can picnic beneath the hundreds of cherry trees and explore the grounds, with a traditional Japanese garden, a rose garden with 2,600 plants and tea ceremony house. The trees line the edges of a pond, creating beautiful reflections and dreamy sakura photo-ops as they begin to fall and float on the water’s surface.

Other places to see cherry blossoms

If you don’t mind the masses, see our guide to the best Kyoto sakura spots. We’ve also got all the top cherry blossom places in Tokyo, not to mention Kanazawa –perfect if you’re looking to escape the crowds.

While we do our best to ensure it’s correct, information is subject to change. This article was originally published in March 2018. Last updated in March 2022.

Places mentioned in the article:
Osaka
Written by: Lily Crossley-Baxter
Filed under: Things to Do
Tags:
Sharing