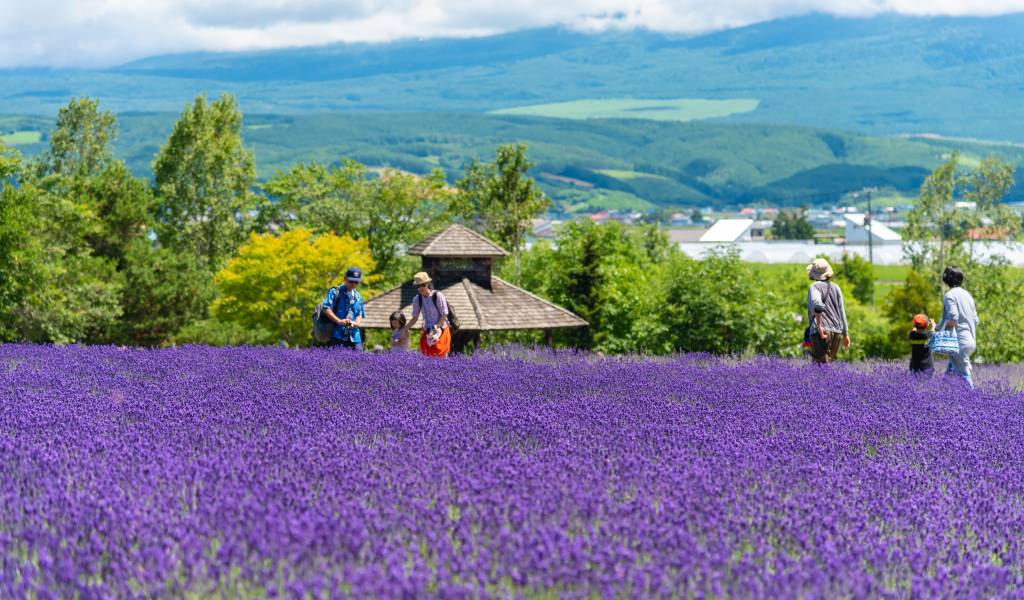 Head on up to the famous Lavender fields of Hokkaido for a cool summer break and some stunningly beautiful views.

Right now, many in Honshu—Japan’s main island—are sweating buckets and feeling uncomfortably sticky, as summer in Japan is quite the hot and humid season. So where’s one good place for a summer getaway? Up north taking in the lovely Hokkaido lavender fields—that’s where! Hokkaido’s climate is cooler than mainland Japan, which means that summers over there are more pleasant.

Summer is also a time when Hokkaido’s countryside bursts into color with beautiful summer blossoms, and Furano and Biei are two of Hokkaido’s best-known places where colorful flower fields are concerned. While these areas will have different types of flowers blooming from July to October, July is considered the best time to visit, especially for the lavender, which will be mostly—if not totally—gone by mid-August.

The good news is that most of these fields do not charge for admission. The bad news? They can be pretty difficult to access by foot, but there are plenty of bus/train/car options instead! There are four main farms, and all offer pretty similar Lavender based experiences, but with additional perks like veg picking or cheesecake (pick your sides).

Farm Tomita is Furano’s best-known place to see lavenders and has several vast flower fields, a perfume workshop and cafes. The farm has 10 fields and gardens, one of which is devoted solely to lavenders (though lavenders also grow in some of the other fields). The lavender draws in plenty of tourists, and it’s quite easy to tell they’re the star attraction, as the place has several souvenir shops with all things lavender-related, including ice cream and cheesecake.

But don’t just go there to see the lavenders; the other blossoms are just as lovely, if not more vibrant and colorful because of their red, yellow, and orange hues. This writer really recommends not missing the lavenders, but if you can’t visit during lavender season, Farm Tomita during the rest of the summer months should still be a treat for the eyes.

Access: The closest station is Lavender-Farm (Lavender-Batake in Japanese); however, this station is only open in summer, and only the Norokko-go stops here. The second closest station—which, unlike Lavender-Farm, is open year-round—is Nakafurano, although it’s a 25-minute walk from there to Farm Tomita.
Opening Hours: from 8.30am to 6pm.

Lavender East is the second farm belonging to Tomita and is 4 km to the East, featuring, you guessed it, one of Japan’s largest lavender fields! It’s so large that, for ¥200 (¥100 for children aged 4-12), the farm offers 15- to 20-minute guided tractor rides across one of their fields. You’ll see not only lavender, but also a breathtaking view of the Tokachi and Yubari Mountains, the backdrop against which the lavender fields are set.

Access: Walking from Farm Tomita to Lavender East isn’t feasible, but it’s a 7-minute car ride from one farm to the other.
Opening Hours: 9am – 4.30pm

Flower Land Kamifurano is another area popular for Lavender as well as seasonal produce. Hokkaido is something of a gourmet paradise for many Japanese, and since Flower Land Kamifurano also has asparagus, corn, potatoes, melons, and onions in addition to flowers, why not get some top-quality produce here? They also have sightseeing tractor-pulled tours (¥500 for adults, ¥300 for children)so you can enjoy the displays with minimum effort!

Shikisai no Oka (Shikisai Hill) is Biei’s top farm, aptly known as a panoramic flower garden. It’s a vast, vast garden that many people tour around through tractors, buggies, or carts. It also has a tiny alpaca farm (¥500 for admission).

Lastly, Biei is also known for Panoramic Road and Patchwork Road, which aren’t actual roads, but more like fields. Again, these are nearly impossible to access on foot, but should be quite a pleasure to cycle to and from. You can also see parts of these areas from the Norokko train.

Getting To and Around Furano and Biei

If you’re getting to Hokkaido by plane, the most common point of entry is Sapporo New Chitose Airport. (For the cheapest ways to get to Sapporo from Tokyo, check out this article, which covers the “Welcome to Hokkaido” discount flight fare.) From Sapporo, you can take the Chuo Bus to Furano, which costs ¥2,260 one-way (or ¥4,150 round-trip) and takes about 2 and 1/2 hours. You can check the timetable here.

Alternatively, you can take the Super Kamui limited express from New Chitose Airport or Sapporo to Asahikawa or Takikawa, after which you switch to local trains to Furano or Biei. The Furano-Biei Rail ticket covers this journey, which we talk about more a little further down.

Also, do note that some options mentioned here are unavailable during non-summer months (summer months in Japan being June, July, and August).

If you want to save yourself the trouble of figuring out public transport timetables, you can take the round-trip bus tours, which stop at Furano’s and/or Biei’s main attractions. They’re not hop-on,-hop-off buses; think of them as tour buses without a guide. While they save you the trouble of figuring out how to get from point A to point B, the downside is that you’ll be spending very limited time at the tourist spots, essentially just having enough time for photo ops but not too much time to explore.

Meanwhile, Furano has the Kururu Bus which runs from July 10th to August 10th. More like a traditional hop-on, hop-off sightseeing bus, there are two different courses to choose from, but again, you’re time in each spot is limited. The Flower Course is ¥2,000 for adults and stops at the Farm Tomita, Saika no Sato and Furano Winery. The Rokugo Course is 3,000 each and visits the Furano Cheese Factory, a TV set, a Music Box Museum, Rokugo Forest, Vista point and a Jam Factory. It’s possible to do both in one day as Flower tour leaves Furano station at 9.15am and drops you back at 11.55am, while the Rokugo bus leaves at 1pm returning for 5.35pm.

If you prefer public busses, there are some options which would allow you to spend longer at certain spots. For example, the Lavender Bus runs eight times a daybetween Furano Station to Asahikawa Station via Biei station.

The Furano-Biei rail ticket, which is available at major JR offices in Hokkaido, gets you round-trip train transportation from New Chitose Airport (or Sapporo) to Furano and Biei (and vice-versa), as well as unlimited train travel for up to four days within the Furano-Biei area, for ¥6,500 (or ¥3,250 for children). (Bonus points for the Norokko, which takes you to Furano and Biei, being an old-school train that offers scenic views of the countryside.) Holders of the Furano-Biei rail ticket can also rent a car around Asahikawa and Furano for a decent discount – even if it is slightly counter-intuitive.

Shared taxis (only from Nakafurano Station to Farm Tomita, and vice-versa)

Running every 20 minutes from around 8:40 am-4:50 pm all July, a ride costs ¥200 per passenger. Up to nine passengers can fit in a taxi. You can’t make a reservation; just board from Nakafurano Station, Farm Tomita, or Tomita Melon House. This is a good option if you don’t have one of the aforementioned rail tickets.