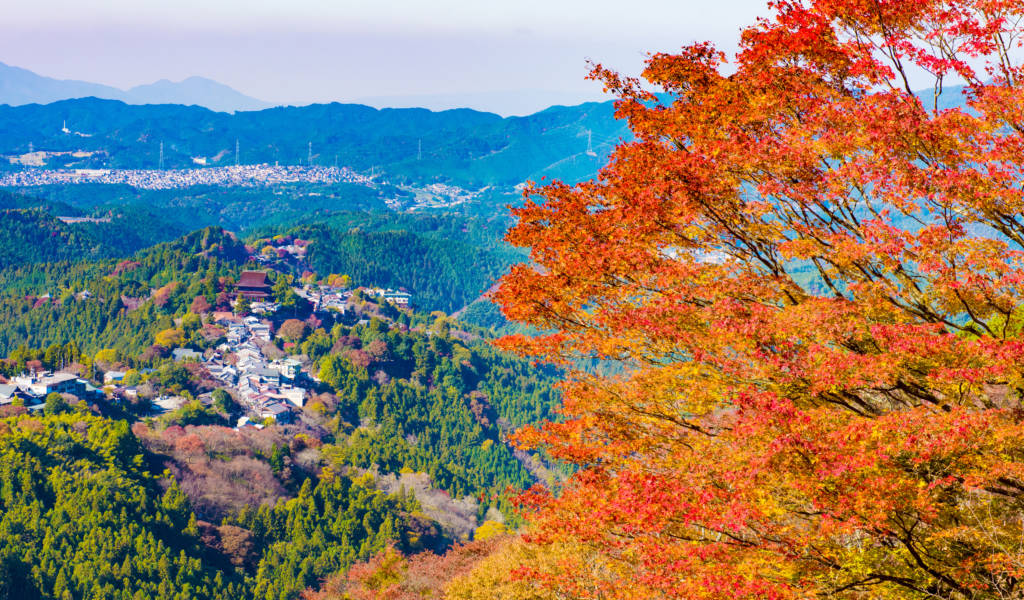 Get your fall fix wherever you are in Japan. From Hokkaidō’s mountain ranges to the secret valleys of Kansai, there are plenty of spectacular sights of autumn leaves to go around.

Rivaling the crowds of cherry blossom season, autumn in Japan is alive with the spirit of seasonal appreciation, albeit in a slightly more reflective, reserved way. The appearance of kōyō (literally “colorful leaves”) transforms regular streets into stunning seasonal postcards and parks into picturesque scenes worthy of a painting. Mountains offer vistas across multi-tonal valleys and gorges are filled with falling leaves. The only difficult bit is choosing where to go.

Peak foliage times in Japan in 2022

Starting with Hokkaidō and stretching down to Kyūshū, the best times for Japan autumn leaves vary from September to mid-December. A rough guide looks a little like this (the forecast is mainly for red leaves, the most prized):

While the general rule works on an east-to-west sweep, there are exceptions. Depending on altitude and plant variety, neighboring prefectures can be on surprisingly different timelines. For example, if you’re arriving in Tokyo a whole month before its peak viewing time in late November, pop on the train to Nikkō where the leaves turn in October. Another way to catch the leaves is to check out the primary tree types: ginkgo, for example, stay golden for longer than many other trees, so if it’s late in the season, head for places with plenty of those.

Hokkaidō’s largest national park, Daisetsuzan is a wild and rugged space shaped by volcanic eruptions of the past and little else. A heaven for hikers and campers, it is also stunning in autumn, as whole swathes of the mountains are covered in warming hues.

The Ginsendai trailhead is one of the first spots in Japan to see the leaves change and is very popular, with shuttle buses replacing private transport during the peak season. If you’re keen to hike, follow the trail to the peak of Mount Akadake — it’s steep but otherwise unchallenging, takes 2–3 hours, and offers the perfect view of the the famous slope covered in reddened Japanese Mountain Ash trees.

You can also choose from countless onsen in the area — Asahidake and Kogen both have particularly good autumnal views.

Hachimantai is another mountainous region with great views to be enjoyed from hiking trails and onsen alike. It’s a popular spot for drivers, too. The plateaued top of Mt. Hachimantai doesn’t have the best views, but the winding road (the Hachimantai Aspite Line) up to it does. And, surprisingly, the trailhead parking lot is a good view point, too.

Goshōgake Onsen has a small ryokan open to the public. Nearby are relaxed hiking trails, featuring smaller mud volcanoes bubbling away, around Oyunuma Pond and the Odoro Volcano, which is Japan’s largest mud volcano.

This region is best navigated with a car, but there are some public transport options available, with buses traveling from Tazawako Station (the nearest stop on the Akita Shinkansen) to Goshōgake Onsen on weekends and holidays and more regularly to the Hachimantai Mountaintop Rest House (also from Morioka).

Easily reached from nearby Nikkō, the nearly 100 meter-long Kegon Falls is one of Japan’s most breathtaking views, best taken in from afar. Take the Akechidaira Ropeway to the observatory for the wider view above or the two observations platforms closer to the base. Note that the leaves around Tōshō-gū Shrine (in Nikkō) turn a little later, predicted for early to mid-November in 2022.

If you want to explore a little farther, the Senjōgahara Trail is easy and short (2–3 hours) and passes a few other waterfalls.

From Nikkō, the journey to the Chūzenjiko bus terminal for Kegon Falls takes just under an hour. It’s included in the All Nikkō Area pass (which you can purchase here). Here are some further details on the pass and how to get to Nikkō from Tokyo

When a local priest planted momiji (maple) trees on the path towards Kōjakuji Temple, local residents followed suit, and the area is now considered one of the best spots in Chūbu for autumn-leaf viewing. The valley is home to around 4,000 color-changing maples.

There are hiking trails to the peak of Mt. Iimori from Kōjakuji Temple and the footpaths along the river are dotted with beautiful trees. One of the sightseeing highlights is the Taigetsukyō Bridge, which can be found between Kōrankei bus stop and the temple.

This year there will be illuminations from sundown until 9 p.m. throughout November as part of the annual autumn festival.

From Nagoya, Kōrankei can be reached via multiple routes. One of the simplest is to catch the Meitetsu Line to Higashi-Okazaki (30 minutes), then catch a Meitetsu bus from there (70 minutes).

Throughout November, the mountains surrounding the well-known abodes of Shirakawa-gō begin to adopt the colors of autumn. From hanging persimmons to drying rice crops, the village becomes a picture-perfect scene of traditional seasonal life in Japan. The trees in the village begin turning a few weeks after those in the mountains.

From Takayama, catch one of the dedicated Nohi buses to the village. The journey takes around 50 minutes and a round-trip ticket costs ¥4,600 per person. There are also buses running to and from Gero Onsen, so you can continue onwards from Shirakawa-gō if you like.

Known for its old-fashioned railway, the Kurobe Gorge is a yet another charismatic kōyō spot.

Starting from Unazuki Onsen, the train carries sightseers across impressive bridges and through the gorge all the way to Keyakidaira Station. While riding the train offers incredible views of the gorge, viewing the train as part of the landscape can also be stunning. The observation deck on the Yamabiko Trail offers great views of the famous Shin-Yamabiko Bridge from above.

The train has open-air or closed carriages. A trip from the first to last stop takes about 80 minutes and costs just under ¥2,000, with two places to stop along the way if you want to break up the journey.

Kuronagi Station is home to the blue Atobiki Bridge and Kuronagi Onsen’s riverside mixed bath. Kanetsuri Station also has riverside baths, but they are entirely open to the elements and passersby. The final stop, Keyakidaira has views of the beautiful Sarutobikyō Gorge and foot baths to enjoy, as well as the well-known Hitokui Iwa Trail — known as the “man-eating path,” thanks to the rock-face location.

Note that other areas in Toyama like the Tateyama Ropeway and Arimine Park will peak in early to mid-October — it’s a split prefecture when it comes to changing colors!

From Kanazawa, the fastest option is to catch the Hokuriku Shinkansen Hakutata service to Kurobe Unazuki Onsen Station, which takes 35 minutes and costs ¥3,560 for an unreserved seat. For the cheaper option, catch the Ishikawa Railway to Namerikawa and change to the Toyama Chihō railway, alighting at Shin-Kurobe Station; this journey takes 2 hours and costs ¥2,340.

Already a popular area to explore, Lake Kawaguchiko has its own festival for autumn leaves as well as some very famous spots to admire them. If you head to the northern shore of the lake, Mt. Fuji can be seen across the water, framed by leaves if you plan it right. The Sunnide Resort parking lot is an unexpected photo spot. There are also numerous trees along the lakeside walking trail, and the Momiji Corridor is especially popular.

The Momiji Corridor — a stunning spot close to the Itchiku Kubota Art Museum — is at the heart of the Fuji-Kawaguchiko Fall Leaves Festival.

From Tokyo, you can opt for a highway bus which takes 2 hours. Or consider a train journey from Shinjuku Station changing at Otsuki, which takes around 2.5 hours. Our Kawaguchiko day trip guide has all the tips on bus passes and transport from Tokyo. There are also tours, like this one, that include return transport from Tokyo to seasonal sightseeing spots around Kawaguchiko.

** Update: This temple is still “temporarily closed” due to COVID-19 precautions **

East of Kyoto in the lesser-visited Shiga Prefecture lies a painfully beautiful autumnal scene on the grounds of Seiryū-ji Temple. Built during the Kamakura period, the temple has a Zen garden which transforms into a mosaic of autumnal colours.

As a small, local temple it is still relatively quiet but growing increasingly popular as the framed view is drawing in visitors.

Similarly, Enkōji Temple in Kyoto offers a beautiful framed view of the garden, and can be easier to access (note: reservations are required).

From Kyoto catch the JR special rapid to Maibara and change to the JR Tokaidō line, getting off at Kashiwabara (75 minutes, ¥1,520). The temple is a 15–20 minute walk from the station.

The famous torii gate may remain unchanged by the seasons (recently restored!), but the mountain and trees behind it certainly don’t. Miyajima’s Mt. Misen creates a stunning backdrop to the temples and shrines of the island. There are also some great hiking trails to the top (and a cable car, too).

Momijidani-kōen (meaning “Maple Valley Park”) is a good place to start your kōyō viewing. Meanwhile the steps to Daishōin Temple are lined with brightly colored leaves, making the ascent all the more rewarding. Enjoy the views and be sure to try the deep-fried momiji from the shopping street!

If you’ve already been to Miyajima and are looking for an alternative, head out to Sandankyō Gorge. An hour and a half from Hiroshima, the gorge has beautiful leaves and an easy trail with multiple waterfalls. The leaves at Sandankyō turn around the same time as in Miyajima, meaning you can hit both on the same trip.

From Hiroshima, head to Miyajimaguchi Station on the JR Sanyō Line or the city streetcar. From there, catch either the JR or private ferry; both take 10 minutes to get to Miyajima Island.

Well known for its autumn leaves and therefore pretty crowded to say the least, Tōfukuji is one of Kyoto’s many famous kōyō spots. Founded in 1236, the temple has some free and some paid entry areas, and one of the latter is the popular Tsutenkyō Bridge.

The 100-meter-long maple-covered walkway offers views of bright tree tops and becomes incredibly crowded during the season, but is also beautiful when it becomes part of the view itself. The bridge joins the Kaisandō and Hondō halls, with the gardens of the latter designed by famous gardener Mirei Shigamori.

From Kyoto Station, catch the Nara Line to Tōfukuji Station or catch the 208 bus if you’re using a bus pass.

The Mino Falls is a perfect day trip from Osaka.The 3 km “hike” is pretty easy as it’s paved.

The shops and restaurants lining the route offer seasonal treats like fried momiji leaves and are well worth a stop. As is the equally famous Katsuo-ji Temple, known for its round, red Daruma dolls. The falls and Katsuo-ji are lit up during early evening on weekends and holidays between Nov. 12 and Dec. 4 (from sunset until 8.30 p.m.).

Osaka has plenty of other kōyō spots — have a look at some alternative options in the area.

From Osaka, catch the Takarazuka Line to Ishibashi, change to the Minoo Line and get off at Minoo Station — the journey takes 30 minutes.

One of Tokyo’s top autumn highlights (if not Japan’s) is the garden Rikugien.

The park has annual evening illuminations, although this year’s event has not yet been confirmed.

Around 400 Japanese maples surround the Sanin Bridge and form Momiji Valley, while the pond offers stunning reflections of the surroundings. Stop off at the teahouse for matcha and seasonal wagashi (Japanese-style confection) and stay late for the lights — they’re worth it.

The closest station to Rikugien is Komagome on the JR Yamanote Line.