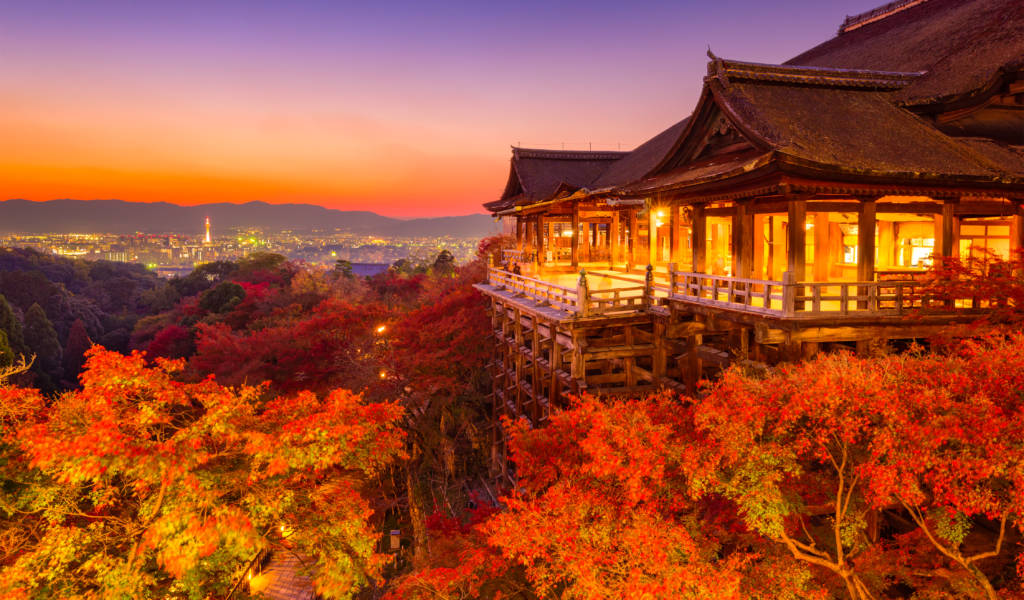 Viewing Autumn Leaves in Kyoto and Beyond

The viewing of autumn leaves in Kansai typically starts around mid-November and can last until early December. It’s a great time to head to Western Japan and check out those beautiful leaves amid gorgeous scenery. Don’t know where to start? This guide to fall foliage in Kyoto and beyond can help!

Kyoto is one of Japan’s top spots to see autumn leaves—and that’s why it has an entire section of its own here. Take note that these are just a few of Kyoto’s beautiful foliage viewing spots. It’s no exaggeration that there are many (many, many) places in Kyoto to soak in the autumn colors. While Kyoto usually gets insanely crowded at this time of year, the crowds may still be thinned out in 2022 due to reduced inbound tourism, which is good for domestic visitors.

If you’re planning to go, better start making reservations already! Departing from Tokyo? Here are the fastest and cheapest ways to get to Kyoto.

Arguably Kyoto’s most popular temple, Kiyomizudera sees loads of tourists each day, and you can expect even more of them in autumn. This huge, sprawling complex is the temple to see for those who are pressed for time and can’t visit too many places in the city. It’s in central Kyoto, and is covered by several bus routes.

It has a very impressive view from the balcony in autumn. If seeing the leaves during the day isn’t enough, hang around until nightfall for their special illumination from November 18th to 30th, ending at 9.30pm.

Tofukuji is Japan’s largest and oldest Zen temple. It has gained national recognition for its Sanmon, Japan’s oldest Zen main gate (designated as a National Treasure), and its Honbo Garden, which has the honor of being a National Site of Scenic Beauty. See the beauty of Tofukuji for yourself this autumn as the temple grounds are home to several maple trees.

The temple is a 10-minute walk from JR’s or Keihan Railway’s Tofukuji Station, but it’s also accessible by bus.

This long-standing Shinto shrine built in honor of Sugawara no Michizane, the god of wisdom and learning, has a garden that’s only open a few times a year for seasonal attractions such as plum blossoms and autumn scenery. The garden has about 250 maple trees that are around 300–400 years old. You can enjoy them not only in their natural splendor during the day, but also lit up at night. As Michizane’s birth and death both fell on the 25th (of June and February respectively), a small festival is held each month, making it a bonus day to aim for.

The entry cost may seem a bit steep for a garden, but just look at that scenery! Besides, the entrance price also gets you a small sweet.

Autumn hours: 9 am to 8 pm (during illumination)
Illumination: Mid-November to early December | Sunset to 8 pm
Admission: Free for temple grounds | ¥1,000/adult and ¥500/child for the garden

Kodaiji is a Zen Buddhist temple where warlord Hideyoshi Toyotomi and his wife, Nene, who happens to be co-founder of the temple, are enshrined. Aside from its main hall, which used to be decorated with lacquer and gold before it burned down (several times over), the temple has some gardens, a bamboo grove, a museum (admission already included in the ¥600 fee). For ¥900, you can get a combo ticket for Kodaiji, the museum and the Entoku-in sub-temple).

Chion-in is the head temple of the Jodo (Pure Land) Buddhist sect. As such, its founder Honen is honored here. The temple grounds are extremely spacious; in fact, its Sanmon (main gate) is one of the largest in Japan. It has two gardens, one of which—Hojo Garden—goes back all the way to the early-Edo era and was designated as a Famous Scenic Spot of Kyoto.

The other garden, Yuzen-en, has two teahouses. It also happens to be one of three sites within the temple grounds that is illuminated nightly for most of November. The other two sites are the Amida-dou (Amitabha Hall), which houses a 2.5 m statue of the Buddha, and Kuromon, the Black Gate.

This is not a temple, shrine, or garden—it’s an entire area in western Kyoto. With temples, shrines, a monkey park, bamboo forest and more, it’s a popular tourist attraction, but it’s noticeably more rural than central Kyoto (i.e. the part of Kyoto where most of the tourist spots are clustered), so you can feel closer to nature here.

The view of the mountainside—with its trees a vivid crimson—from Arashiyama’s famous bridge, Togetsukyo, is extremely popular. You can also enjoy Arashiyama’s breathtaking landscape by taking a scenic train, aptly called the Sagano Romantic Train, from Torokko Saga Station (which is very near JR Saga-Arashiyama Station) for ¥620 one way.

If you happen to be there in mid-November, be sure to check out the Arashiyama Momiji Festival!

Rurikoin isn’t located in a touristy part of Kyoto, so it’s trickier to get to, and significantly more expensive than the other viewing spots. But it’s a photographer’s dream come true, so it’s well worth the visit. Also, it’s not always open to the public due to structural concerns, so Autumn is a unique chance to see this elusive temple.

Rurikoin has three beautiful gardens and a tea room, so you can enjoy the autumn leaves in relative tranquility. It’s a 5-minute walk from Yase-Hieizanguchi Station on the Eizan Main Line, nearly an hour away from central Kyoto.

As of September 2022, Rurikoin has not confirmed if they will open to the public for Autumn, although as they opened in August it is looking promising!

Experience fewer crowds and some stunning views a short ride from the ancient capital with these easy day trips. The times will vary a little depending on how far from Kyoto you travel and elevation, so keep that in mind.

Japan’s largest freshwater lake, Lake Biwa is often alluded to in ancient Japanese literature. Within the vicinity of the lake, there are some attractions, listed below, known for their autumn leaves.

One is Keisokuji, a temple on a mountain north of the lake. It’s 10 minutes from the Kobashi bus stop, which in turn can be reached by bus from JR Kinomoto Station.

The beautiful national treasure that is Hikone Castle has a garden called Genkyu-en, which is illuminated at night throughout autumn. It’s 10 minutes from JR Hikone Station and admission costs ¥700.

While the illumination dates for 2022 have not yet been confirmed, in previous years they have been accompanied by a tea ceremony in the garden. If going ahead, you can reserve a spot tea ceremony in the garden for an extra ¥500. This includes one cup of matcha tea and one sweet. Last year, there were four 30-minute timeslots per night starting at 6 pm, 6:45 pm, 7:30 pm and 8:15 pm. Keep in mind that while many locations have kept illuminations, they have continued not to hold tea ceremonies due to the need for distancing so the tea ceremony isn’t guaranteed.

The autumn moon at Ishiyamadera (10 minutes from Keihan Ishiyamadera Station, admission ¥600), where Lady Murasaki is said to have begun writing The Tale of Genji, is traditionally considered to be one of the Eight Views of Omi (the ancient name for Shiga Prefecture). Head on over to see for yourself if it deserves the recognition.

Lastly, there’s Mt. Hiei, on the southwestern side, which stands on the border of Kyoto and Shiga prefectures.

Mt. Koya, or Koyasan in Japanese (-san is the suffix for “mountain”), is holy ground for Shingon Buddhists as their founder Kukai (aka Kobo Daishi) established a monastery there. It’s both a pilgrimage and tourist spot, albeit a quieter and more tranquil tourist spot than most. With temples making up most of its tourist attractions, the sacred aura of the place really gets to you, so it’s a good place for a spiritual retreat.

Or, if you’re not the spiritual type, it’s still offers a place to clear your mind. It also happens to be a very scenic place throughout the four seasons. It might be more crowded than usual during autumn, but it’s still relatively quieter than most other viewing spots. You can read about Koyasan here. It takes about 2 to 3 hours to reach Koyasan from Kyoto.

Mt. Yoshino is better known for its cherry blossoms (in fact, it’s said to be Japan’s best viewing site for cherry blossoms), but this World Heritage Site also has a view to offer in autumn. Parts of the mountain are even lit up at night.

Yoshino Station can be reached from Kyoto Station in about 2 hours, give or take, via Kintetsu Railways’ limited express (¥2,590) or express (¥1,250) train. From Yoshino Station, a ropeway can take you up the mountain for ¥450 one way or ¥800 round trip. There are also buses to take you to town. Alternatively, you can go on a relatively easy hike up Mt. Yoshino.

This vast expanse is where most of Nara’s main tourist attractions—like Todaiji, the famous temple with one of Japan’s largest Buddha statues; and Kofukuji, the temple with an iconic pagoda—can be found. (You can read about Nara Park here.) There are several maple trees around the park, and their beauty is complemented by temples, shrines, ponds, stone lanterns, and so on.

We do our best to ensure information is correct, however details are subject to change.