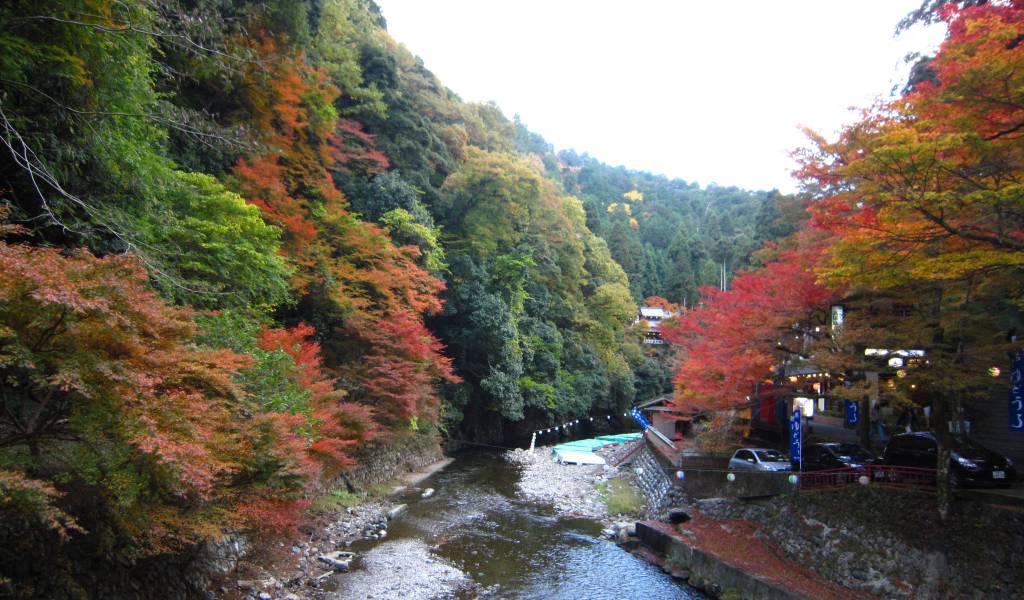 Takao's Secrets: Going for a Hike in Western Kyoto

On the northwestern edge of Kyoto lies Takao, a scarcely-populated mountain region hiding vast nature and beautiful temples. Takao is only an hour away from central Kyoto and is an attractive destination throughout the year for those who like the outdoors. Here are the basics of the Kyoto Takao hike and its sights.

The first “secret” of the Kyoto Takao hike is the UNESCO World Heritage Site Kozanji, dating back to the year 774. One of the many treasures the temple owns is Choju-Jinbutsu-giga, a set of scrolls considered to be Japan’s very first version of manga. They have been entrusted to Kyoto and Tokyo’s National Museums. Often referred to in English as ‘Scrolls of Frolicking Animals and Humans’, the four-picture scrolls depict rabbits and monkeys bathing and prepare to attend a ceremony. However, a thieving monkey appears and knocks over a frog during the lively ceremony. In the final scenes, some of the animals play together while others participate in a funeral and pray to Buddha. The story has been adapted into numerous novels and served as an inspiration for many manga artists throughout Japan. Apart from the scrolls, Kozanji might also be the first place in Japan where tea was cultivated. Visitors can admire a restored tea plantation during their visit.

Jingoji is another Buddhist temple complex located nearby, belonging to the Shingon Buddhism sect devoted to the Buddha of Healing. The temple grounds are vast and house a great variety of buildings, but the most famous section is the approach—visitors climb hundreds of steps towards the main gate. During autumn, the approach is marked by red maple trees and small shops selling all kinds of snacks and small dishes.

Before heading out towards the hiking path, you can also find Saimyoji—accessible via the Shigetsukyo Bridge, which is beautifully covered in vermilion paint and is another one of Takao’s famous scenes. Saimyoji is perhaps the smallest of the three temples, but in its size lies its charm. The tiny pond and moss-covered gardens, combined with an amazing view across the valley, are a treat for the eyes. The shop next to the bridge offers delicious hot-pot dishes—so you can regain energy for the upcoming walk through the river valley.

From there, the Kiyotaki River trail is a two-to-three-hour hike taking you along the base of Mount Atago. It offers some of the most beautiful scenery you will find in the Kansai region, as well as many places to jump in the river during the hot summer months. During autumn, the valley turns into thousands of shades of yellow, orange and red as the leaves start changing color. The trail is one of Kyoto’s most popular hiking paths, yet it is still rare to come across anyone else. I can probably count the number of people I’ve seen during my five visits to the area on two hands.

Every 30 minutes there is a JR bus that leaves from Kyoto Station (for Keihokucho) to Takao, which is covered by the JR Pass or costs about ¥520 one way and takes roughly 50 minutes. There are other stops along the way, such as JR Nijo Station and Ninnaji. Another option is to take Kyoto city bus number 8, but be aware that not the entire route to Takao is covered by the city’s flat-rate area. The bus leaves from Shijo Karasuma and like the JR Bus costs ¥520 one way. The Kyoto city bus stops in Takao are conveniently located near Jingoji and Saimyoji, while the JR bus also continues to Toganoo bus stop near Kozanji.

After your hike, you can head to the Kiyotaki bus stop up the hill from Sagakiyotaki. From here, you can take Kyoto buses 64 and 94 towards Arashiyama, which is completely covered under Kyoto’s flat-rate area. Access to the temples in Takao is generally free, except in November for the autumn season.

Have you done the Kyoto Takao hike? Leave your impressions in the comments below!

Places mentioned in this post
Kyoto
Written by: Bjorn
Filed under: Things to Do
Tags:
Sharing