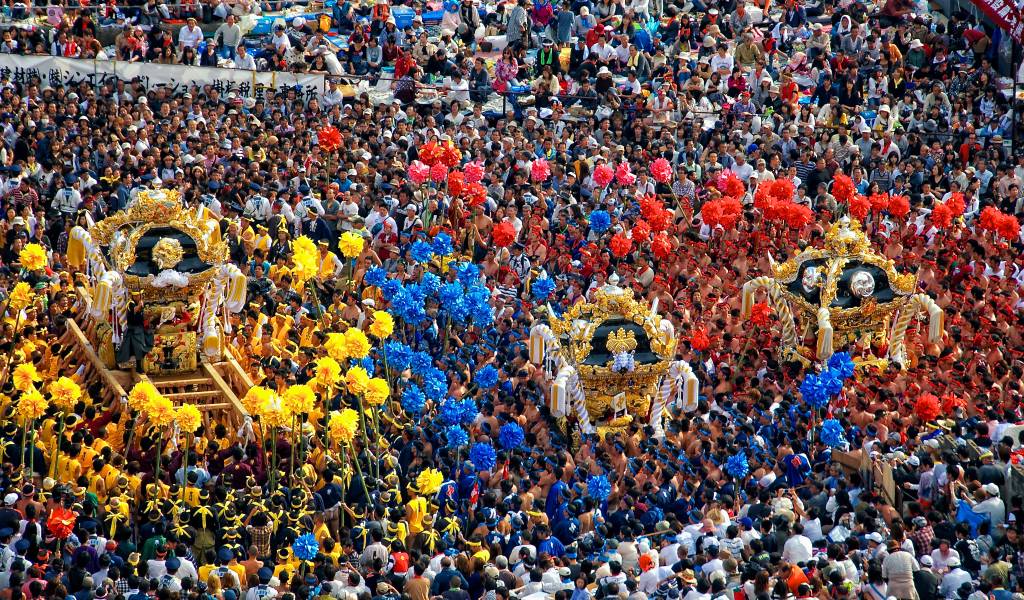 October means autumn, and in Japan that means stunning fall festivals. So wherever you are this month, be sure to check out all the top events near you!

Of course, 2019’s autumn months are filled with rugby events. For this post, we’ve stuck to other events, but check out our dedicated rubgy page for full game details!

A bizarre and somewhat creepy festival in Okinawa, the Paantu Festival is centered around mud. Villagers dress up as paantu—supernatural beings with long faces, using foliage and masks. They then parade through the town covering everything possible with mud, from cars to children—all to exorcise the evil spirits.

Dates have been kept quiet following incidents in which tourists who didn’t appreciate the mud-slinging attacked the villagers in retaliation, so finding the dates will take some serious sleuthing.

Recommended Service
20% off Mobile Hotspot rental from Ninja WiFi
Ninja Wifi is the biggest provider of rental pocket wifi devices to international visitors coming to Japan. They also have the most pick-up points.
Click here for details

Osaka is nicknamed Japan’s Kitchen, and this festival is a celebration of all things food! The street is known for cooking utensils and you can pick up the very best Japanese knives and plastic foods. The makers can give you the best tips on caring for your new wares, the food stalls will be selling delicious treats, and there will even be a giant taiyaki (fish-shaped dessert) worthy of the Guinness Book of Records to try!

A small tea jar–opening ceremony held on the first Sunday of October every year, using water drawn straight from the Uji River. The tea jar is presented at Koshoji Temple and ends when it is presented to the Buddha effigy.

A huge celebration of the city’s multi-cultural history, this is the must-see event of the year. It dates back nearly 400 years and involves dance troupes from all 59 neighborhoods and five or six dashimono (performance) groups, along with floats and all the usual festival stalls.

One of the most beautiful and elegant festivals in Japan, this is the counterpart to the spring festival and comes complete with stalls, food, music and parades. The large wheeled floats have marionette performances during the parades, which take place both in the afternoon and evening.

A bright and beautiful local festival, you can enjoy the decorative lanterns which are rather contemporary than the ones seen at most festivals. The town is World Heritage listed and is located on the Seto Inland Sea, also made famous by the Ozu film Tokyo Story.

An unusual festival straight from the screens of top tv series Hanasaku Iroha, this festival began in 2011. The small onsen town of Yuwaku was used as the model for the scenes of the show and each year dedicated fans travel from across Japan to see the fiery festival.

Featuring acts like Gaudi, Wrench, Theus and Habana along with DJs including Masa, Ree.k and Jinnai, this annual event is an open-air music festival to remember. Highlights include a Night Circus, VJs and its very own next-door onsen!

Designed to bond the local students with the community, this event has a huge procession with 1,000 dancers, a mikoshi parade, marching bands, performances from acoustic bands, and a group dance competition too. There will be a fashion show, foods stalls and plenty of activities for children. Since the students make up 10% of the city’s population, they put on a great show!

For displays of brute strength, this is the festival to see. Held annually on the Sunday before National Sports Day, the events attracts thousands of participants and even more spectators. The challenge entered the Guinness Book of World Records in 1997 for being the largest event of its kind in the world, with each side using up to 15,000 participants. The rope is 200 m long and weighs 40 metric tons, so all those people are definitely needed! Started from competition between the east and west side rulers of Naha, it now brings prosperity to the island. There is a grand parade from 12 pm and the tug of war starts at 3 pm.

A large fall festival held in the heart of Kyoto, this event has grand mikoshi parades through local streets with live music and dancing. There will be horseback parades, lanterns, food stalls and plenty more to enjoy!

This is one of the area’s three biggest festivals and features a parade of elaborate mikoshi (portable shrines). It has over 400 years of history with unusual tanuki masks, music and chanting as well as 13 floats—one from each area. The night before the parade is filled with music and dance to prepare for the following day so stay for both if you can!

Created in 2000 to bring smiles to the faces of everyone lucky enough to be in Osaka at the time, this festival has dance performances with 2,800 participants with teams competing to be overall winners. It takes place in multiple locations and the final round is an amazing sight!

A food-filled event designed to encourage women to eat more ramen alone, as ramen is often cosidered a male-leaning dish and environment. That doesn’t mean only women are welcome though, so do take the opportunity to try some of the best bowlfuls from across the country. The ten days of the festival are divided into two parts—from September 27 to October 2 and then again from October 4 to October 8.

A fighting festival held at Matsubara Hachiman Shrine, the Nada no Kenka sees groups of locals carrying large portable shrines from seven different districts on the first day. On the following day, three teams of younger men carry three giant mikoshi and jostle them around the shrine from 9 am, again at 1 pm and later at 4:30 pm.

A more relaxing festival for sure, here you can explore the shrine grounds when lit by decorative lanterns. There will be traditional entertainment including music and performances as well as food stalls to keep your hunger at bay. The first day is the Shogun celebration and the second is the Chende celebration. You can add your own lantern to the shrine grounds for ¥500.

A samurai-themed festival in the surroundings of the Toshogu Shrine—the Shuki Taisai Festival has a parade of over 1,000 men in era-appropriate dress. They will be taking on the role of foot soldiers, cavalry and archers and marching as a commemoration of the funeral procession for the mighty Ieyasu Tokogawa, the first Tokugawa Shogun, to whom the Toshogu Shrine is dedicated. On the 16th, the festival will start with yabusame (horseback archery) with the grande procession on the Sunday.

This festival is held in a small residential area with a community procession of burning torches to commemorate the day in 970 when the Yuki Myojin was moved from central Kyoto to Kurama. The festival starts at about 6 pm in the evening, when big kagaribi bonfires are lit along the village streets.

The biggest historical parade in Kyoto, the Jidai Matsuri translates to the “Festival of the Ages” and commemorates the founding of the Kyoto as the Imperial Capital in 794. There will be over 2,000 people forming a procession—all dressed in costumes from the ages departing from the Imperial Palace up to Heian Jingu Shrine. One of the highlights is the presence of geisha dressed in the incredibly elegant junhitoe kimono.

Even if you’re not running, marathon day is a great time to visit Kanazawa—you can cheer on the runners and see the city at its busy best. There will be 12,000 participants starting from Hirosaki Street and plenty of costumes to see!

Held at a major shrine with over 140 years of history, this festival features a procession of the gods on both days from 1 pm to 4 pm. Many will be on horseback and all will be in traditional clothing. On the second day you can enjoy entertainment around the Jinmu-sama Square.