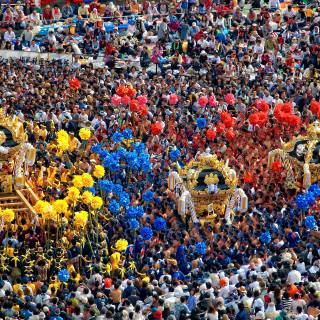 The Nada no Kenka Matsuri is a fighting festival held at Matubara Hachiman Shrine in Himeji, Hyogo Prefecture in October.

The first day of celebrations sees seven yatai floats from seven different districts transported to the shrine for ceremonies between 11am and 2pm. The following day sees three teams of younger men in fundoshi (loin cloths) carrying three huge mikoshi (portable shrines) jostle each other in the area around the shrine from 9am until midday. The jostling/fighting is continued at 1pm and again at 4:30pm.