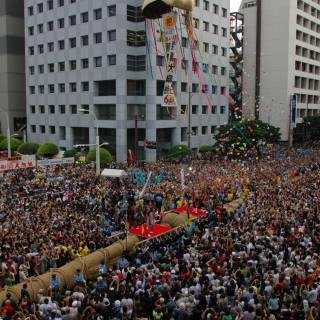 Every year on the Sunday before National Sports Day in Naha, Okinawa, a Tug-of-War event is held, attracting thousands of participants, and even more spectators. With a 40-metric-ton and 200-meter long rope, it got in the Guinness Book of World Records in 1997 for being the largest tug-of-war event in the world. Each side accommodates up to 15,000 participants.

The origin of this tradition roots from the the competition between the east and the west side rulers of Naha back in the 17th century. Now, the custom is performed to bring good prosperity to Okinawa, as well as the participants good health. Before the 3:00 pm Tug-of-War event, at 11:00 a.m there is a grand parade. Lion dancing, fan dancing, and martial arts performances, these are inclusive in the parade, and are not to be missed either. The parade is located on Kokusai Dori, while the tug-of-war is at 58 Kumoji crossing. There is no admission fee.

Closest to the Prefectural Office Station on the Yui Rail line, the race is held in the heart of Naha. If you’re unsure of how to reach Okinawa in the first place, then we have a handy guide from Tokyo.

The best hostel option nearby is Kitchen Hostel Ao which blends trendy cpasule pods with modern design and all the amenities you need. If you need a little more privacy but are still on a budget, Y’s Cabin and Hotel is the perfect upgrade. For the full hotel experience, JAL City Naha is a full Western-style hotel with a little luxe for your stay.