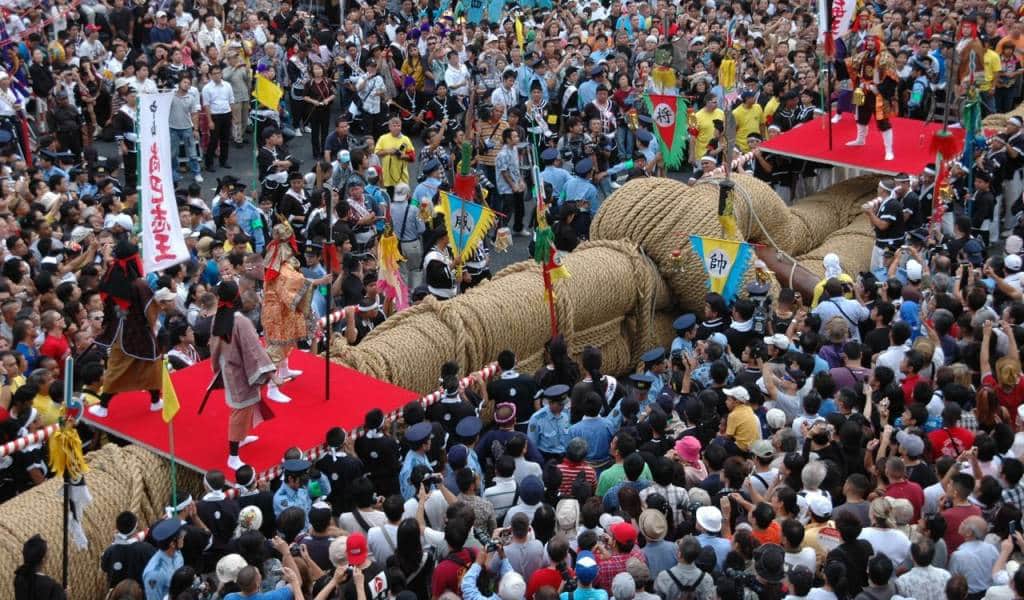 Held every October in Naha, the capital of Okinawa, the Naha Tug-of-War or Otsunahiki is the highlight event of the weekend-long Naha Matsuri. The entire downtown core of Naha shuts down to accommodate the more than 250,000 people who attend and, of course, the giant rope itself, which is laid down along Highway 58 like a snake waiting to pounce. In addition to the tug-of-war, there’s also a huge parade with music, dancing, traditional Okinawa dress, entertainment, plus lots of Okinawa food and cold Orion beer.

In 1995, the Naha Tug-of-War was officially inaugurated into the Guinness Book of World Records as the biggest tug-of-war event on the planet. And it is without a doubt the most popular event in all of Okinawa.

Here’s our full run-down on what to see and do during this unique festival.

The tug-of-war takes place at the Kumoji Intersection along Highway 58, which cuts through downtown Naha. If you’re staying in Naha, take the adorable two-car monorail to Prefectural Office Station, and walk about 2 minutes to the Kumoji intersection.

If you’re not staying in the city, then it’s best to take a taxi and get dropped off nearby, as traffic at this time is particularly intense. Those with rental cars will want to find a parking lot nearby in advance, or park a bit farther away and take the monorail to Prefectural Office Station.

Top tip: See our guide on how to travel from Tokyo to Okinawa.

This year, the Naha Tug-of-War Festival is cancelled. It was originally scheduled to take place on October 10–11, 2020.

On October 10 (Saturday), head to Kokusai Dori, the popular shopping and entertainment street in Naha, for a day of parades, music, and entertainment. Kokusai Dori is a must-see while visiting Okinawa, with lots of restaurants, cafes and bars, and shops selling local Okinawa souvenirs. Walk through the Makishi Market shopping arcade to see habu-shu or snake wine shops, as well as the local handmade instrument, sanshin.

(Note: Makishi Market is undergoing renovations in 2020, and many shops are closed.)

On October 11 (Sunday), it’s time for the Great Tug-of-War. The event takes up almost the entire day, and you can decide how much you want to see. Though it officially begins at 11 am, the tug-of-war itself does not take place until later in the afternoon.

At 11 am, on Kokusai Dori, the festival kicks off with the teams holding a procession of hatagashira banners which are carried through the streets. These 14 banners represent the 14 districts of Naha City. This procession then continues over to Highway 58.

At 2:30 pm, the opening ceremony is held, with displays of Okinawa martial arts, and other performances. Following this, the teams start to whip up the crowds into a frenzy to prepare them for the battle ahead.

Once the ropes are connected, the tug-of-war finally begins. Each rope is some 300 metres long, and weighs more than 40 tonnes. To allow more participants, the main rope has a number of smaller ropes, which people can grab on to. What people love about this event is that everybody is welcome to join in and participate, rather than just being a passive bystander.

The east and west teams must try to pull the ropes a distance of 5 metres to win. The cries of ‘hiiya! hiiya!’ fill the air as the teams sweat and struggle to pull the massive ropes. If no team manages to move the rope 5 metres, then after 30 minutes, whichever team has moved closest to 3 metres is announced the winner.

So how to participate in this huge, crowded event? It’s simple—get there early! There are so many people around that it’s hard to even get close to the rope. As the actual tug-of-war starts around 4 pm, try to get there at least an hour or two before, and try to stay close to the rope as more and more people arrive. Be sure to take some gloves to wear, or you can really get bad rope burn on your palms from all the pulling!

After the event, it is customary to cut off small strands of the rope as a souvenir, and a good luck talisman.

The Naha Tug-of-War Festival dates back to the era of the Ryukyu Kingdom, and it is estimated that the first tug-of-war was held somewhere around 1450. The villages would pray for health and prosperity, and hold tug-of-wars as a fun way to bring together the community.

The event was not held for many decades, as the Battle of Okinawa caused widespread destruction in many parts of the island. It was thankfully revived in 1971, and since then has become the biggest and most famous event in Okinawa Prefecture.

Hotels near the festival

If you want to be right in the heart of the action, then Kokusai Dori is the place to stay.

Held every August 15, the town of Itoman, just south of Naha, holds its own tug-of-war, with a distinctly local touch. In addition to traditional performances and a parade of flags called michijune, the festival also features young men dressed as characters of Itoman, Ichimanmagi and Makabechan, from Okinawa folklore. Though much smaller than the Naha Tug-of-War, this event lets you see the action at the local community level. Of course the crowds are much smaller too, letting you get closer to the ropes.

The tiny town of Yonabaru in south-east Okinawa hosts a fascinating event, also with an elaborate michijune parade. In this event, the rope is a bit smaller than the one used in Naha, and many regal characters actually stand on top of the ropes as they are carried in to the sports ground. Once the kanachibo stick is inserted to connect the two ropes, they are dropped to the ground in a loud slam, and the pulling begins. Again as this is a smaller community event, with fewer crowds, it is a great chance to really participate in a tug-of-war, even for kids.

Open with Maps
Written by: Emily Dickson
Filed under: Things to Do
Tags:
Sharing