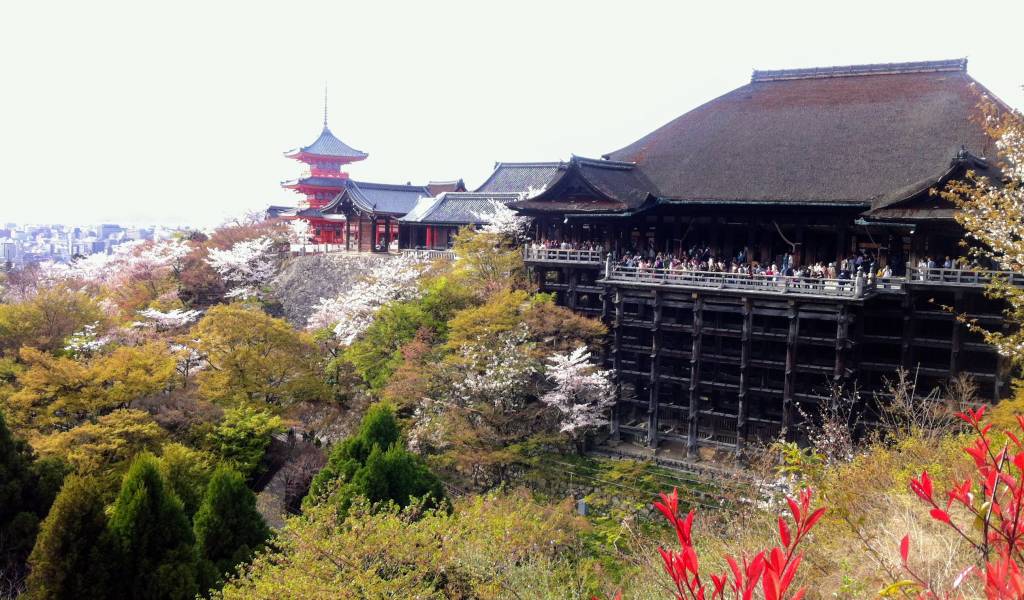 The Legends of Kyoto's Kiyomizu-dera

Simply put, Kiyomizu-dera is the most popular attraction in Kyoto and no matter when you decide to go it will be crowded. Nonetheless, it is a must-see whenever you are in the city and you may come to severely regret not going if you would decide to skip it for those reasons alone.

The legends of pure water

The fun begins even before you actually visit Kiyomizu-dera, as you walk along the slopes of the Higashiyama district with its many shops and restaurant that just breath an atmosphere of hospitality. From simple tacky souvenirs to famous Kiyomizu-yaki pottery to delicious sweets they have managed to cater to the needs of the countless pilgrims and tourists flocking to the temple.

Kiyomizu-dera, literally translates to “Temple of Pure Water”, referring to the pure water of the Otowa Waterfall at the heart of the temple. The origins of the temple can be traced back to the Buddhist Hosso sect, but since the temple has burned down several times over the century many legends remain over who and how the temple was founded. One of the most popular legends is that a monk named Enchin dreamt of golden streams flowing from the mountain into the Yodogawa River. When he went to there to see for himself, he found an old man named Gyoei sitting on a log. Upon approaching the him, he was told the old man had been sitting there for 200 years and the log was to be used to make an image of Kannon, a god with 11 faces and a 1000 arms. The old man wished to go on a pilgrimage, but asked Enchin to take his place upon the log and so he did. After having waited for a long time Enchin went after the old man and found no trace of him but his shoes. Enchin believed the old man was actually Kannon and hurried back to the log to shape it in his image, yet after spending many years on it he did not manage to get it right until one day a warrior Saka-no-ue Tamuramaro came by. The warrior was so impressed by Enchin’s devotion that he converted his own home into a temple and with his support Enchin was finally able to finish the image.

Once you pass through the main gate, the first place you can head out towards is the un-illuminated subterranean passage which holds a stone said to grant you any wish. Next up is Kiyomizu-dera’s main hall housing the statue mentioned in the legend. From the main hall’s stage, built without the use of nails to stand 13 meters above the hill’s slope, you can see Kyoto in the distance but more importantly the numerous cherry and maple trees that cover the surrounding hillside.

When exiting the stage there is a small stairway to the left leading up to a small Shinto shrine, named Jishu-jinja. In front of the shrine there are two stone pillars about 18 meters apart and those who wish to ensure a lucky love life make the attempt to walk from one stone to the other with their eyes closed. Of course, you can have someone help you find your way, but this would indicate that someone else will also need to help you in your love life.

Amida Hall is a building you will pass as you make your way down the hill. Unfortunately, Amida Hall is currently, for many years in fact, being restored and closed to the public, yet the view from the path along the hall is Kyoto’s most famous views with Kiyomizu-dera’s main hall to the right and the heart of the city in the middle. During the seasonal illuminations this view is even more beautiful as the entire hillside is covered in the vibrant colours of the seasons.

The Otowa Waterfall splits into three streams at the slope of the hill, each having their own unique meaning to whoever drinks from them. One stream serves to cause longevity, the other academic success and the last a good love life. For those of you thinking you would like to drink of all three, I must disappoint you as drinking from all three is considered greedy and you would not receive any blessing.

Kyoto’s city buses 100 and 206 stop at “Gojo-zaka” or “Kiyomizu-michi” from where it’s a little under ten minutes by foot uphill towards Kiyomizu-dera. Alternatively, you can also go to Kiyomizu-Gojo Station on the Keihan Railway Line which is about 20 minutes away to the right of the castle’s main gate. The opening hours alter slightly throughout the year, but the temple is always open between 6:00 and 17:30 with special night-time openings which you can find on the temple’s website. A minor admission fee of 300 yen or 400 yen if you visit during the special night-time illuminations in spring or autumn and is requested before passing through the main gate.