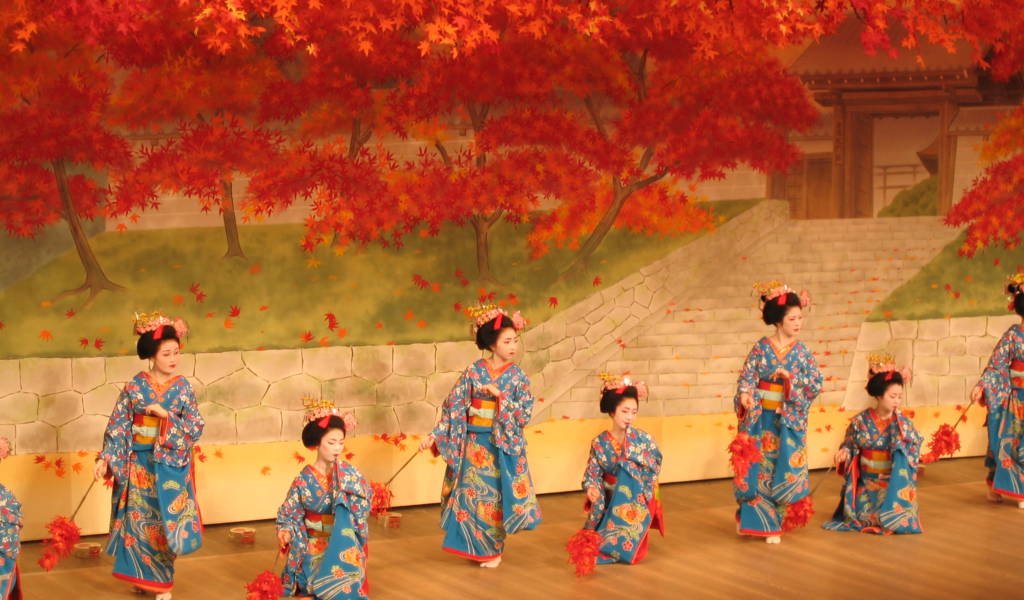 Things are getting chilly now that it’s November—but there’s plenty to do to keep you distracted and even warm you up, from fire-walking to ramen festivals!

This is the only one of the different Kyoto dance performances that takes place in autumn rather than spring, so if you missed the earlier performances you’re in luck. There are 10 days to see geisha at the Gion Kaikan near Yasaka Shrine and two performances on each day.

Held in a city renowned for its gyoza (dumplings), there’s no better festival if you’re a lover of the delicious delights often found as extras to your steaming bowl of ramen. With one plate costing only ¥100, you can afford to indulge!

A touch of summer sun in the depths of what is winter for most of us, Agaitida is a three-day festival with DJs from Bulgaria, Macau, Hong Kong and beyond. There are camping spots or you can snag a room at the on-site hotel—set up next to the pool and your weekend is set.

This local festival takes place in Ishigaki City and combines a wide range of performances and attractions including live music, a bench-press challenge and stage performances, with a firework display to close celebrations.

Held on the shores on the Seto Inland Sea since 1933, this local festival features a parade, two stages and a gourmet zone. The main day is on Sunday, with a pre-festival taking place the evening before.

This is Karatsu Shrine’s main festival as well as being one of the most popular in the prefecture. Be sure to catch the Hikiyama floats which can reach up to 7 meters in height and weigh between 2 and 4 tons. The best part is on the second day, where the floats are carried across the beach, often getting stuck in the sand.

If you’re a ramen fiend, there’s nowhere else you need to be this week—with countless options for ramen and each bowl costing only ¥750!

This small festival is an autumnal celebration in Higashiomi. The road will be closed from the Higashiomi city office so that the large market can take over the street. There will be games and activities and plenty for families as well as food and drinks too.

Held on the Island of Miyajima at Itsukushima Shrine, this is a chance to see an age-old tradition in one of the most famous places in Japan. You’re welcome to take part but don’t be surprised if you walk away singed!

Enjoy a parade of over 1,000 traditionally costumed people as they chant ‘wasso’  and march through the streets. Meaning ‘I came’ in Korean, the chant is used to remember all those who have come to Japan from across Asia. The outfits are accurate reconstructions and the event is held at Naniwa no Miya as this is where people would have landed when they arrived.

A unique event taking place at an elementary school in Miyoshi—this festival has local delicacies as well as a marching band made up of yokai (supernatural monsters). The town is famed for the supernatural monsters from Japanese folklore and this unusual event is too good to miss if you’re in the area.

An unusual illuination event with projections telling the stories of legendary characters as visitors follow a trail through the castle grounds.

Celebrate autumn while you explore one of the most famous bamboo forests in Japan with this stunning fall festival. Boats parade along the river with costumed performers elaborately dressed as members of the Heian period. They will perform Noh theater and play musical instruments to entertain the crowds.

A great opportunity to see the last major sumo tournament of the year, this 15-day competition ends with an eventual champion. It’s busier on the first days, the middle weekend and the last few days—otherwise it should be quite easy to get unreserved tickets.

Vogue’s annual shopping and fashion extravaganza has a Kansai version, and will be held at the Hankyu Umeda Honten and the Hankyu Men’s Osaka stores for two nights—while Tokyo only got one! There are special guests, plenty of entertainment and, of course, lots of shopping to be done!

Organized by TV Aichi, this is a large market which happens twice a year and was started back in 1994. With over 1,500 booths, 30,000 keen bargain-hunters are expected and there will be entertainment including local celebrities. Tickets are required, with two prices—one for earlier entry at 9 am and one for 10 am, both available for advance purchase.

With over 30 different nationalities at home in Okinawa, this festival is a varied and impressive display of them all. With previous years of samba dancing, live music, karate and tug-of-war too as well as food stalls from all over the world.