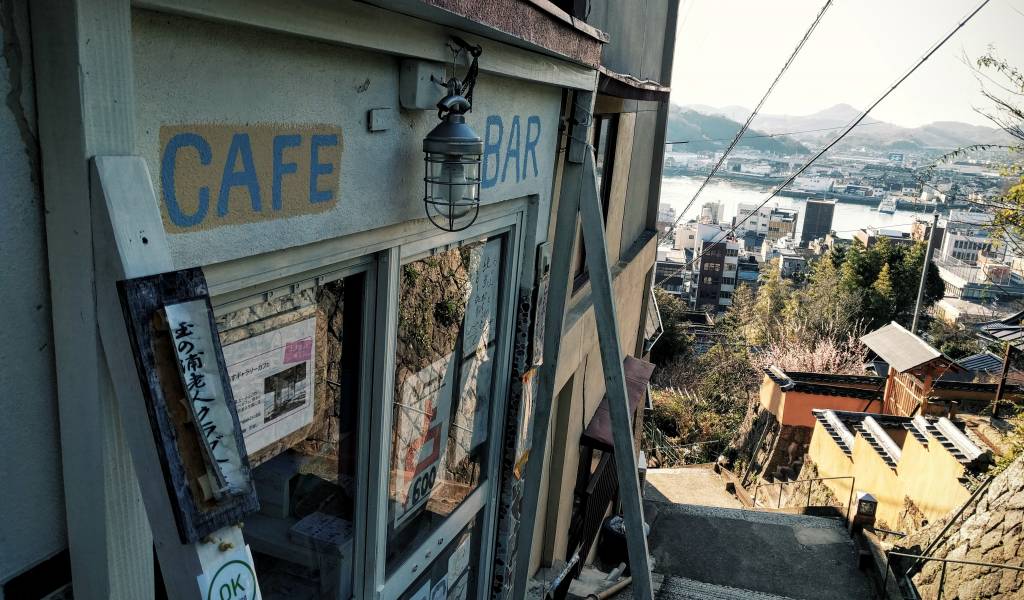 You may already know Onomichi from the highly acclaimed (and 100% Rotten Tomatoes score) film Tokyo Story. But whether or not you are a film buff, the city no doubt is a little different 60 years later. On the surface Onomichi, a small shipbuilding town on Seto Inland Sea, is the typical portrait of crumbling rural/local Japan away from the large cities. The moment one alights from the shabby old local train, there’s an immediate flavor of “rusting seaside town” wafting through the air. And as you stroll the (fairly empty) streets, you’ll be struck by both the age of the buildings and its residents.

However, dig just a little below the unpolished surface and you’ll find some artisanal gold shining underneath. The locals I spoke to informed me that the town is attracting a small but growing battalion of artists and big city escapees—one can find quirky coffee shops, refurbished warehouses, renovated residences and even some local craft/industry.

In Onomici, one can rent monthly accommodation for two, near the water for only 20,000 yen(!!!), so naturally that’s a real pull to people who want to keep their living costs low so they can spend more time working on their arts and crafts.

Of course if you’ve had your fill of bespecticaled and bearded baristas, you can still go full vintage and stop at one of the genuine old skool coffee shops, that probably haven’t changed in several decades. We had a cheapish “toast set” breakfast, ~750yen each, at Onomichi Roman Coffee.

In many ways I’m reminded of the dilapidated Brighton (UK) when I moved there in the early 90’s, which at the time was rusting, neglected and full of artist squatters. Of course Since then it has been through the artist -> hipster -> gentrification cycle and has been total r(uined)ejuvenated.

What to Do in Onomichi

The town is already known for a number of shrines and the The Path of Literature, so these are all fairly well posted and easy to find. One can easily hike up 100s of steps through quaint old wooden houses to the temples, and on the Path of Literature atop the hill behind the train station.

Along the way you’ll no doubt bump into some of the friendly locals, the stray cats. (And leave it up to Hiroshima Prefecture to have a site called “Cat Street View“—so you can navigate the streets through a cat’s perspective. Oh, Japan.)

Exploring the Back Streets

Being a small town, Onomichi is well suited to exploring on foot. And for me most of the charm of the city was in all the hickled- pickledy little back streets sandwiched together like something out of a Studio Ghibli film. Running off from the main shotengai (shopping street) are little alleys where one can find rickety old houses, sinks, toothbrushes and washing machines outside in the alleys, plus the occasional arty little coffee shop. And similarly hiking up the hill behind the station, one can find intriguing old houses, arty cafes and of course templates.

Any mention of Onomichi wouldn’t be complete without a section on the refurbished U2 cycle-themed warehouse. Housed under the industrial-like warehouse roof you’ll find: an on site bakery, espresso cafe (Yard Cafe—coffee is pretty good), a counter bar, local goodies (jam, etc.), a cycle shop AND a cycle hotel. And to complete the picture, you’ll be pleased to know a young Australian chap with a MASSIVE beard writing a piece for a cycle magazine passed though while we sipped our flat whites.

The “cycle hotel” (“cycle” because each room has a bike hook on the wall), makes a good starting point for anyone planning on embarking on the 80km Shimanami Kaido cycle route across to Ehime. Although if you’re a cheapo more than cycle hipster, you might be tempted to save yourself a few quid and stay at a normal hotel or hostel and just lock your bike up outside.

Where to Stay in Onomichi

Onomichi has options to please cheapos of all budgets. There are of course some clean economy hotels, which you can easily find on Agoda, but we explored a couple of options with more personality.

There are a number of cheap hostels in Onomichi, the average price seemed to hover around 2,500 yen per night. I stumbled across Yado Guesthouse, a renovated wooden building that was apparently built well over 100 years ago! If you stay here, it will probably be the oldest building you’ll stay in, in Japan. I chatted with the very friendly staff, who all happen to be artists, and they also run the Chaider (チャイだー) cafe next door. Both are owned by a local creative/entrepreneur who runs a non-profit organisation (which is very rare in Japan) ID Onomichi.

The whole place is decked out in wood and there’s a lounge area (pictured above) which has a view of the bay. Also you have the option of renting the private room (5,000 yen or 2,500 yen per person if greater than two), if you’re a flashpacker.

If you’re above flashpacker status, or you’re in a party of 4 or more then the Shimazui Manor is supurb value luxury, from 42,000 yen for the night. It’s recently refurbished and very spacious three bedroom house, complete with a roof top deck overlooking the city. It has numerous luxurious little touches, like the large wooden bath, induction hot plate, artistically furnished rooms and long silken pajamas. Moreover it’s run by the same company as the U2 warehouse, and their English-speaking staff are extremely helpful. Our host Noriko greeted us at the station, delivered our bags to the house and made us feel very at home with all her recommendations for the city. For just over 10,000 yen per night each (as a party of 4) the quality is difficult to beat.