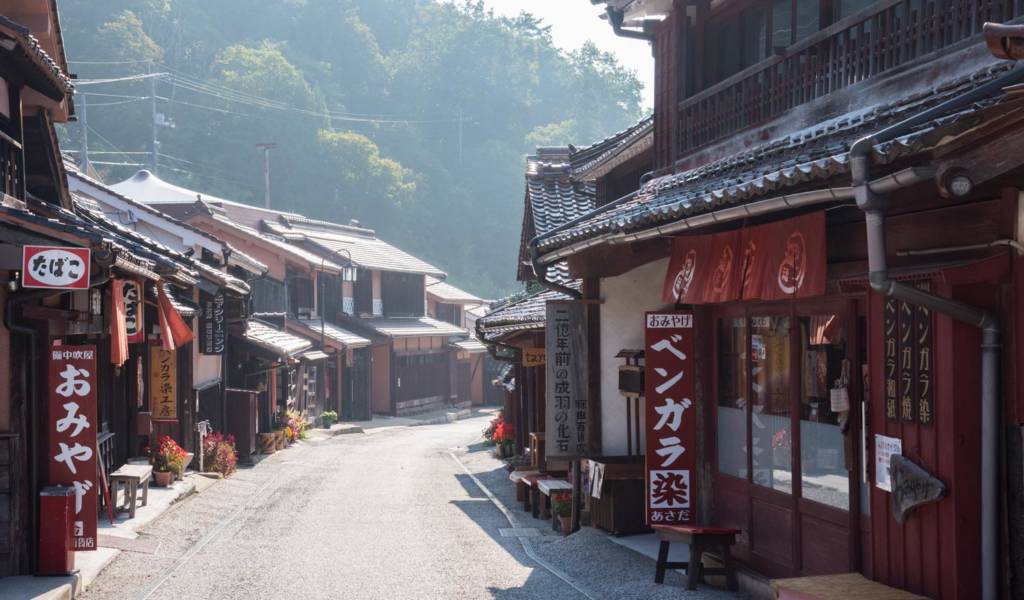 Okayama: Bridging the Crimson Past and the Indigo Blue Present of Japan

Okayama is one of the major transport hubs on the Sanyo Shinkansen between Hiroshima and Osaka—and while it may not be a familiar name to travelers, it would be a big mistake to overlook it. If you are looking to experience “real Japan,” the “Land of Sunshine” is a destination that warrants slowing things down and exploring carefully.

Here are just a few highlights from the home of Momotaro!

Located on the coast of the Seto Inland Sea, Kurashiki has a long history as a storehouse for rice which was used to pay taxes to the shogun. The name Kurashiki translates to “storage charges”. With much of the area comprised of reclaimed land, the salty soil which was unsuited for growing rice, was repurposed as cotton and rush (tatami) farms.

While Betty Smith may not be a familiar name to many non-Japanese, the company has roots to one of the first domestic producers of jeans as well as one of the leading manufacturers of school uniforms. The village includes 2 museums which trace the history of Japanese jeans complete with the vintage and modern machinery used to produce them. There is also the original factory building where visitors can watch the products being sewn (9am to 5pm, closed on weekends and holidays).

Custom order jeans with a variety of options start at around ¥30,000 with the more affordable but less customizable “omiyage jeans” option which can be taken home on the same day. Visitors can also try their hands at putting rivets and buttons in customized keychains/phone straps for just ¥400.

Kojima Jeans Street was established in 2010 as a revitalization of the downtown area and capitalizing on the growing fame and popularity of locally produced denim. A selvage line runs down the pavement and jeans hang down like banners along the narrow alleys lined with several dozens of Okayama’s finest denim suppliers. Unfortunately, the day that we went happened to be Sports Day, a national holiday, which explains why so many of the shops on the street were closed.

Access: Kojima Jeans Street is about 15 minutes from JR Kojima Station by foot or 5 minutes via the special denim bus.

Visiting the historic port town of Kurashiki is like taking a leap back in time to the Edo period when it served as a vital rice distribution center. Weeping willows hang low as boatmen in straw hats ferry riders down the narrow canal. Even when it gets crowded, Kurashiki is a place where you can relax and go back in time. Kimono rental and dressing services are available for those who want to take advantage of the nostalgic surroundings and commemorate the visit with photos. Don’t be surprised if you see cosplayers posing in the streets either!

For those who have no qualms about putting their hands near hot stoves can experience making “mura-suzume” Japanese sweets at Kikkodo. They also have premade ones that go nicely with a cup of tea as well.

Access: Kurashiki Bikan Historical Area is about a 10-minute walk from the south exit of Kurashiki Station which can be accessed via the JR West Sanyo Main Line (16 minutes and ¥320) from Okayama Station.

In the case that the juxtaposition of historical Japanese architecture and modern tourism is too much to handle, you can escape by ascending the hill and visiting Achi Shrine. The climb is quite formidable, which makes it a trek not easily taken. However, once you reach the shrine, the views are quite rewarding. If you need a time-out from a town frozen in time, Achi Shrine might just be the answer even if the journey there may not be the easiest to undertake.

Takahashi, Okayama: Castle in the Sky and bengara riches 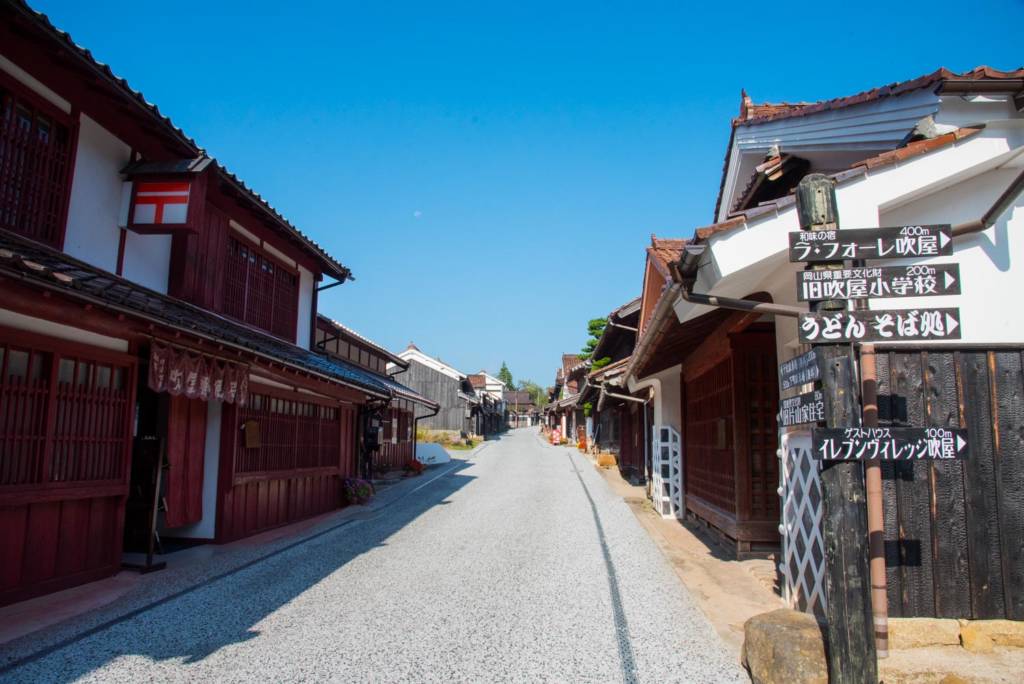 While relatively isolated and difficult to reach without a rental car, Takahashi, Okayama is well worth the effort to visit as an area virtually unchanged since its heyday. There is a strong feeling of being spirited away to the setting of a Studio Ghibli animated film, emphasized by the sight of umbrellas for Satsuki and Totoro (characters from “My Neighbor Totoro”) hanging near a bus stop.

Deep in the mountains of Okayama is the town of Fukiya, which enjoyed economic prosperity since the Edo period due to copper mining and production of bengara, a reddish dye made from iron oxide. While the boom has long subsided, the village has been preserved with the rust-colored buildings lining the narrow streets.

There are several shops where you can experience making your own bengara pottery or dying cloth with bengara but Fukiya Annaijo Shitamachi Furusato offers a quick substitute for the 2-day process. For ¥1,000-[2000], visitors can stencil handkerchiefs and tote bags in the style of bengara and can take it home that day. Of course, there is also the option to purchase items that have been already been completed as well as food items made from chili peppers and yuzu harvested locally.

Tucked away in the mountains of Fukiya, this former residence of a merchant family is a symbol of the wealth created during the bengara boom. With a garden and 56 rooms overlooking the valley below, it’s surreal to comprehend that this was someone’s actual home only a few centuries ago. Perhaps the fact that it was also the location used for the 1977 horror film Village of Eight Gravestones makes it even more eerie?

Overlooking the city of Takahashi from above the clouds, Bitchu Matsuyama Castle is not only one of the last remaining original castles in all of Japan, it is also the highest, sitting 430 meters above sea level. Bitchu is the former name of the region that is now Takahashi. Originally built in 1240, it has been designated as an Important Cultural Property and was featured in the opening of the 2016 NHK taiga drama “Sanada Maru”.

Getting to the castle is a testament to the reputation that it had as being impenetrable. However, before that trek can begin, one must get to the upper parking lot which is accessible by taxi. Buses from JR Bitchu-Takahashi station occasionally stop at the lower parking lot but an additional shuttle bus ride is necessary to access the upper parking lot closest to the castle. Once there, the 20-minute uphill hike over uneven ground and stone steps begins. Thankfully, there is self-serve tea located on the grounds after you pay the entry fee (adults ¥300, students ¥150). Just imagine what it must have been like for the soldiers stationed at Bitchu Matsuyama Castle getting up there without the conveniences of modern technology! The recommended season to visit the castle is right when the fall colors have begun.

Written by: Kai Okudara
Filed under: Things to Do
Tags:
Sharing