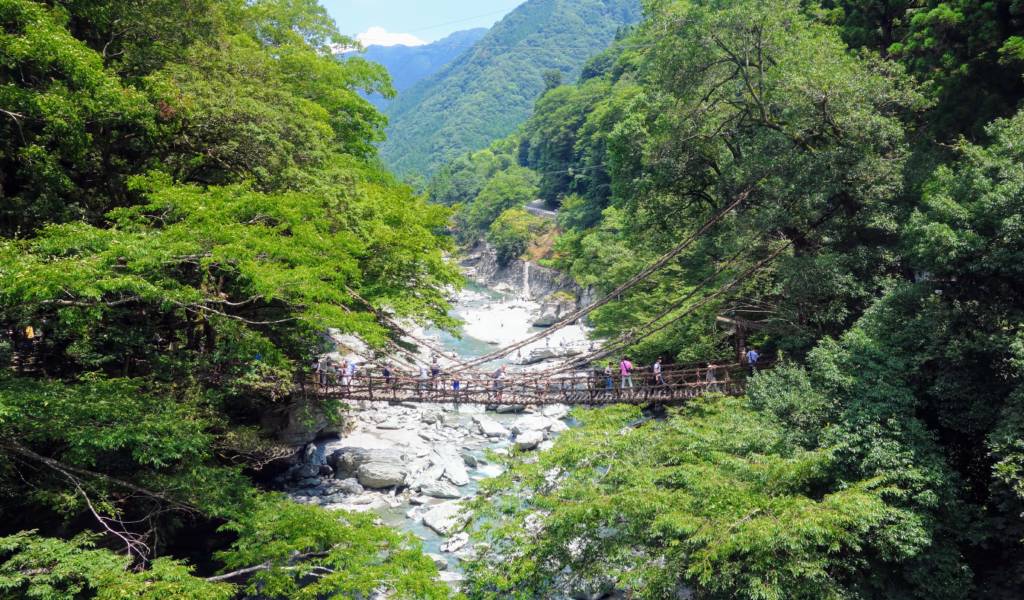 Stretching across the river, the Iya Valley vine bridges are a breathtaking sight, and crossing them is a good way to get your heart racing too.

Deep on the island of Shikoku, the quiet valley of Iya is infamously secluded, so much so that after losing the Gempei War, the surviving members of the Heike clan fled there seeking refuge. Remote and difficult to access, the valleys provided a safe-haven for which the bridges were key.

Strong enough to support crossings but easily sacrificed at a moments notice, they provided a vital transport method for supplies. Today, their descendants still live in the ever-shrinking communities, relying on tourism to keep the area alive. Although the bridges form the main draw to the area, the locals have turned their declining populations into opportunities, with unusual accommodation on offer and villages that either terrify or delight.

The best-known and largest bridge, the Iya Kazurabashi stretches an impressive 45 m long. At 14 m above the river below, it can be daunting for those scared of heights. Since this bride is the easiest to access, it can get pretty busy, especially if a tour bus turns up The bridge is reinforced with steel, so you don’t have to worry about the weight.

Nearby, there’s a waterfall and a few stalls selling snacks like grilled ayu (sweetwater fish) and dango (sweet Japanese “dumplings”). A little past the waterfall you can head down to the river and have a swim. Refreshingly cold, the water below the bridge offers a unique view and the shallower pools are a popular spot for families to spend an afternoon.

Cost: There is a maintenance fee of ¥500 per person to enter the bridge area.
Access: The bridge is easily accessed on the main bus routes, with all stopping at the Kazurabashi main stop.

Quite the trek into the depths of the valley, these bridges are well worth the lengthy bus journey it takes to get to them. With fewer visitors and a more intimate feel, they are shorter, but somehow more impressive because of it. Nicknamed the “husand and wife bridges”, there is a male bridge (slightly longer) and a female bridge (slightly better). Also, a monkey bridge, but more on that later.

Supported with semi-hidden steel, the wooden slats offer a daunting view to the rushing water below, with thick vines binding them together. A little swaying is to be expected, and crossing is invigorating—while watching others is pretty entertaining.

The monkey bridge is a box-like system which requires the user to pull themselves across with their own strength—a task potentially more intimidating than crossing a bridge made of vines. A system previously used for heavier goods, the box is fun to try and passersby will always be on hand to help out if you get stranded (fingers crossed anyway). There is a small cafe next to the bus stop which also sells local goods, but it’s pretty basic, so bringing your own lunch is a good idea.

While the river is too shallow for swimming, sitting by the water is relaxing and a great place to wait for your return bus.

Cost: There is a maintenance fee of ¥500 per person to enter the bridge area.
Access: Deep in the valley, there are around four daily bus routes to the bridges, taking around 2–3 hours each way from Oboke. You have to change buses at Kubo, but this is a tiny bus stop where you just wait for the next mini-bus to arrive so you won’t get lost. The bus journey costs around ¥2,000 yen each way.

A small village on the way to the Oku-Iya bridges, Nagoro would seem pretty regular to anyone passing through. Schoolboys on their way to play baseball, farmers in the field and . . . Trump in a barn? Maybe not. After losing her father, local resident Tsukimi Ayano began making scarecrow residents for the village, modeling some after those who moved or passed away and some entirely new characters. Now, the village is filled with more scarecrows than people and has become a tourist attraction of its own.

Depending on how you feel about puppets or scarecrows in general, this place will either fascinate or terrify you. Possibly an unsettling mix of both. Students study at their school desks and housewives stand on porches—the day-to-day normality of the scenes are probably what’s most bizarre about it all. Until you reach Trump that is, although he may already have been replaced, the undeniable shock of blonde hair and the stars-and-stripes tie were a dead giveaway, but why he was posed in a nativity-like barn scene I will never know.

Cost: The village is free to wander through.
Access: While the buses to the Oku-Iya bridges do stop here, you may have to walk to them after (about 50 minutes) as the next bus is not for quite a long time. The journey costs around ¥2,000 each way and there are about four buses a day.

Hotel Kazurabashi Onsen: A bath with a view

After days of trekking and hiking, there’s nothing better than a soak in an onsen. And when you perch it on a hill with incredible views, you’re pretty much winning at life.

Part of the hotel, a short bus ride from the Oboke Gorge boat rides, the actual baths are so high you have to catch a small tram-like car up the steep climb from the regular hotel building.

The onsen is open to day visitors as well as guests. If you’re lucky you’ll be the only one there, able to relax and enjoy the view in all its glory.

Cost: Entrance to the onsen is ¥1,500 per person.
Access: The hotel is on the regular bus route close to the Kazurabashi main stop.

If you’re keen to get a little deeper into the valley, there are boat rides along the Yoshino River.

Boat rides allow a closer view of the steep sides of the gorge—and your guide will tell you about the formation of the valley. The journey takes about 30 minutes and can be pretty stunning if the water is clear. We suggest avoiding the area if there’s been heavy rainfall though as the cloudy water isn’t that nice.

Cost: A boat ride is ¥1,000 per person.
Access: The boat center has its own dedicated bus stop called Lapis Obok which is served by buses on the way to Awa Ikeda and is quite close to Oboke Station on the Dosan Line (30 minutes from Awa Ikeda).

Finding a hostel for the night is usually an afterthought in travel planning, but in Miyoshi it’s the opportunity to spend one of the most memorable nights you’ll experience in Japan.

Due to the falling population of the local towns, schools have been closing rapidly. The area lost 30 schools between 2004 and 2018, but not all are standing empty. So far, the council have successfully converted five into active spaces including cafes, hostels and community areas in partnership with small businesses.

This is where Haretoke Design Hostel comes in. Located in a former elementary school, the hallways are still adorned with animal murals and you’ll be sleeping beneath chalkboards.

The hostel is very much a back-to-basics scenario though. While you can choose between a basic room or a fancier one (i.e. it has a bed), there are no showers. Before you panic though, there are two great options: an onsen a short drive away and the river, of course.

Since the rooms are simple, you can stay for around ¥1,500 a night which gets you a mat in a shared classroom. Or you can splash out for an actual bed in one of the renovated rooms.

The hostel has a busy cafe run by chef and pâtissière Ayako who runs the business in partnership with her sister, serving up delicious pizza and desserts to locals and visitors alike.

Located up a hill and within a short stroll of a bus stop, having a car would make life easier, especially for the onsen trips, but it’s definitely doable by bus and foot power.

Cost: Dorm beds available from ¥1,500 to ¥3,200 per person.
Access: Haretoke can be reached by bus from Awa Ikeda (sometimes requiring a change at the bridge). The hostel is on one of the two bus routes to the bridges.

Getting around: Local transport options

Having a car makes pretty much all your issues—like timing, distance, making your onsen trip useless by sweating so much on the walk back you need another—go away.

Rental cars are handy, and if you can swing it, that’s ideal. If you don’t, then you can still do all this, you just need to plan ahead. There are community buses in the area, and they are pretty great. They have lovely drivers, even lovelier (but rare) passengers and great wifi (weirdly), so while you’ll be spending a lot of time on them, it’s pretty comfortable.

The bus routes alternate between two routes: one passing the hostel and Iya Onsen hotel, the other going direct to Oboke.

You can find up-to-date timetables here and here although they are in Japanese—Google Translate and patience required.

Traveling between Awa-Ikeda and the main bridge, onsen and river tours area is pretty easy. There are regular buses during the high season and each location has a dedicated stop.

Reaching Haretoke Design Hostel is a little trickier. There are some buses that will take you from Awa-Ikeda to the small village directly. However, you may have to make a connection at the bridge stop with waits of up to 45 minutes by the side of the road or a walk of about the same time.

From Haretoke, you’re on the bus route to the valley and can see the pissing boy, both sets of bridges and Nagoro. This way only requires a quick switch to a smaller vehicle at Kubo if going all the way.

A day by bus

If you catch the early bus from the hostel to the main bridge and then catch the later bus to the farthest two bridges, it is possible to see all three bridges and get home on the same day. However, two days allows you time to see Nagoro and the farthest bridges on one day, leaving the second open for the main bridge, the hilltop onsen and Oboke Gorge before heading back to Awa-Ikeda or the hostel.

Getting to Iya Valley

Miyoshi is a district of Tokushima Prefecture, which is in Shikoku, an island just off Japan’s main island of Honshu. Depending on whether you’re traveling from Tokyo or elsewhere, the first hurdle is getting yourself to Takamatsu City (it has an airport, luckily).

Then, you can catch a train to Oboke (the Dosan Line) or a bus, depending on the location of your hostel or your sightseeing plans —check the bus links above for the up-tp-date times.