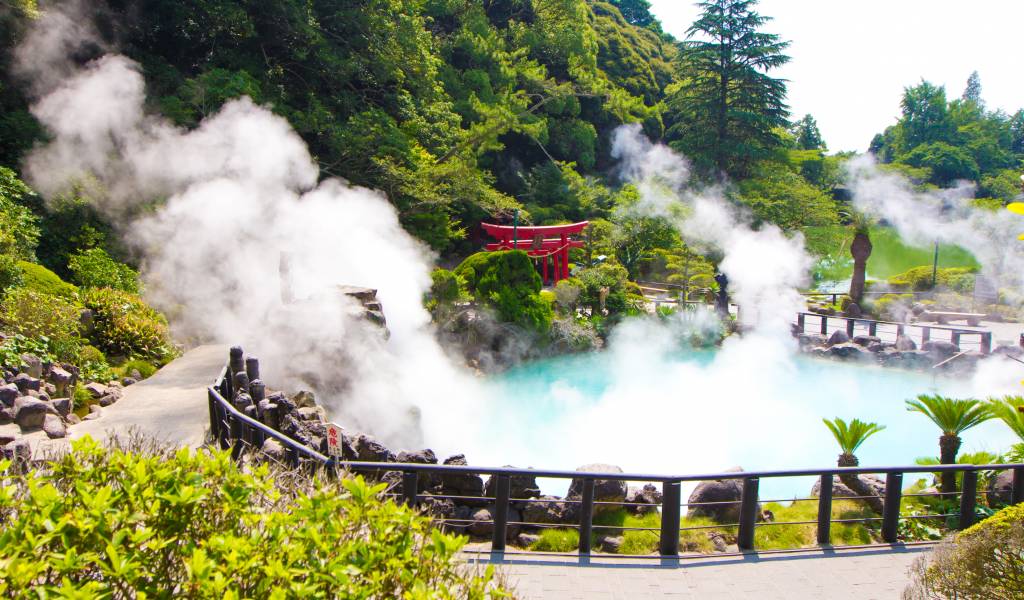 Visiting an onsen is a highlight of any trip to Japan. Fortunately they can be found just about anywhere and everywhere, meaning you should have no trouble fitting a soak into your itinerary.

Here are five top destinations, with bonus advice on which itineraries they work best for — though there’s nothing wrong with doing it the other way, and basing your whole trip around particular springs. With a JR Pass you can travel with little to no additional cost. Learn about the different rail pass options before choosing the right one for your trip.

Not sure if onsen are ready to take the plunge? Check out our guide on bathing tips. Prefer to stay closer to Tokyo? We’ve got a guide for that, too.

Kinosaki: A picturesque stop between Kyoto and Hiroshima

A Kansai-based onsen town in Hyogo Prefecture, Kinosaki is up there when it comes to picturesque spots in which to soak. The town surrounds a central canal lined with willow trees and is a traditional spot with guests wandering the streets in yukata (cotton kimono-like robes) each evening.

With a reputation for healing waters, many baths have been built where legend suggests the injured would bathe wounds in marshes. There are plenty of public bathhouses to choose from, as well as free public foot baths (ashi-yu) to enjoy as you explore. The public baths range from small and traditional to large and modern, so you can see which you like best. There are outdoor cave baths at Ichino-yu, waterfall views at Goshono-yu, and private family baths available at Jizo-yu.

If you’re staying for a while, you can go kayaking in a geopark, try snorkeling, make soba noodles, and even go on a lava-flow hiking course, so you certainly won’t be bored.

Getting there: From Tokyo the journey takes about 5 hours (a little longer if you’re on the JR Pass and can’t take the faster Nozomi trains) and requires two changes at Kyoto and Fukuchiyama, so it works better if you’re visiting Kyoto or Osaka already.

Kinosaki is two and a half hours from Kyoto and a great stop if you’re heading down to see the sand dunes of Tottori (two hours), the castle in Himeji (three hours), or going straight through to Hiroshima (4–5 hours). These routes can all be done on the JR Pass and require minimal changes, as Kinosaki Onsen Station is well connected.

Gero: A great pitstop for the gassho houses of Shirakawago

Definitely not one of the most scenic onsen towns, but Gero‘s reputation carries it through as it was mentioned as one of Japan’s top three onsen by the Confucian poet Hayashi Razan. The town name may also be slang for vomit, but don’t let you put that off (although we’re glad to have found that out after our visit, since it definitely doesn’t help).

Locals are less temperamental, however, and it is still really popular, with plenty of ryokan and public baths available. Once there, you can purchase a wooden Yumeguri Tegata spa pass which grants access to three different onsen (from around 30). Purchase the pass at the tourist office and see brochures of which you would like to visit. A perk of Gero is its proximity to Shirakawago and Takayama, so it is an easy one to fit into your schedule as an overnight stop.

Getting there: Gero is in Gifu Prefecture. From Tokyo it takes roughly 3.5 hours by train via Nagoya and Gifu, costing between ¥12,950 to ¥14,140. If you’re leaving from Nagoya, it’s only an hour and a half by the Hida Wide View (extra wide windows to enjoy the view!) train. Both journeys are fully covered by the JR Pass and you can travel to Takayama in under an hour if you are on your way to see Shirakawago’s gassho houses.

Beppu: A relaxing break near Nagasaki

A destination in itself, the onsen here are nicknamed the Eight Hells of Beppu and are genuinely filled with varying horrors like crocodiles and a blood pond. But don’t let that put you off — there are some normal ones, too. There are eight different hot spring sources here, each with their own public baths and ryokan.

Beppu, which is in Oita Prefecture, in Kyushu, produces more hot spring water than anywhere in the country, so your biggest problem might be choosing where to start. Once you’re bored of the water, why not relax in hot sand baths at Beppu beach or soak in some mud?

We recommend starting at Hyotan Onsen, a public bath with an impressive range of massaging waterfalls, as well as both indoor and outdoor pools, for only ¥780. The best-known onsen in town is the picturesque Takegawara, which was built in 1879 and offers an old-fashioned interior for a traditional soak. To visit the eight hells, you can catch a bus and choose a couple or visit them all — check out our guide for tips. If you would like a prettier onsen experience, try nearby Yufuin; it’s small, tree-lined, and traditional.

Getting there: If you’re traveling direct from Tokyo, it will take just over 6 hours by train with a transfer at Kokura. Beppu is 2 hours from Hiroshima (covered by the JR Pass) and from there it’s a 4-hour journey to Nagasaki (also covered). Admittedly you could just go straight to Nagasaki in 2.5 hours, but Beppu is well worth the extra time!

If you find yourself up north, perhaps for the famous snow festival, this is an onsen town too good to miss. The hot springs here release up to 10,000 tons of water each day, and it’s the perfect place to warm up on the coldest of Japan’s major islands.

You can visit the source of the water, nicknamed Hell Valley. The area has 11 different types of water, with most onsen offering a choice. Daiichi Takimotokan has the biggest range, with seven different kinds, and is a very modern space to relax in. There is only one public bath, the Sagiriyu, which has two types of water and is by far the cheapest option in town.

Getting there: On the JR Pass you can travel by train all the way from Tokyo to Noboribetsu Station via Shin-Hakodate-Hokuto, which takes seven hours, before catching a bus for 15 minutes to the onsen area. If you’re in Hokkaido already, it’s a mere one hour and 20 minutes from Sapporo by limited express to the station. See our guide on getting from Tokyo to Hokkaido.

Dogo Onsen: A detour to Shikoku from Hiroshima

Officially Japan’s oldest spa, Dogo Onsen dates back 3,000 years and is thought to be the inspiration for the bathhouse in Hayao Miyazaki’s animated classic Spirited Away. Designated as an important cultural asset, the bathhouse is located in Matsuyama, the capital of Ehime Prefecture on the island of Shikoku.

The impressive wooden structure is a sight in itself, with a castle-like presence and a watchtower which rings three times a day. It is open to the public as well as the Imperial Family, who have their own private yushinden (bath room) — one of a kind in Japan. You can’t use this, of course, but there are sightseeing tours available if you want a taste of imperial standards. The surrounding area is great for a stroll, with an old-fashioned shopping arcade and a traditional clocktower with puppets emerging on the hour.

Getting there: You can hop across the waters from Hiroshima by ferry if you are sans-JR Pass and prefer boats — choosing between a 2.5 hour journey on the cruise ferry (¥4,500 one way) OR just over an hour on the Super Jet (¥7,800 one way).

Japan Rail Pass holders can catch the bullet train to Okayama and from there catch a limited express to Matsuyama, which takes just over three hours. Making time in your itinerary to explore Shikoku is definitely recommended, with stunning mountains, the Shikoku pilgrimage, and the vine bridges of the Iya Valley all making for incredible adventures.

Note: Starting in 2019, and estimated to take about seven years, Dogo Onsen Honkan is undergoing renovation works. At no point will the entire facilities be closed; however, access will be limited. Currently only the Tama no Yu bath on the first floor is open. The official website has progress reports on the work and reopenings.