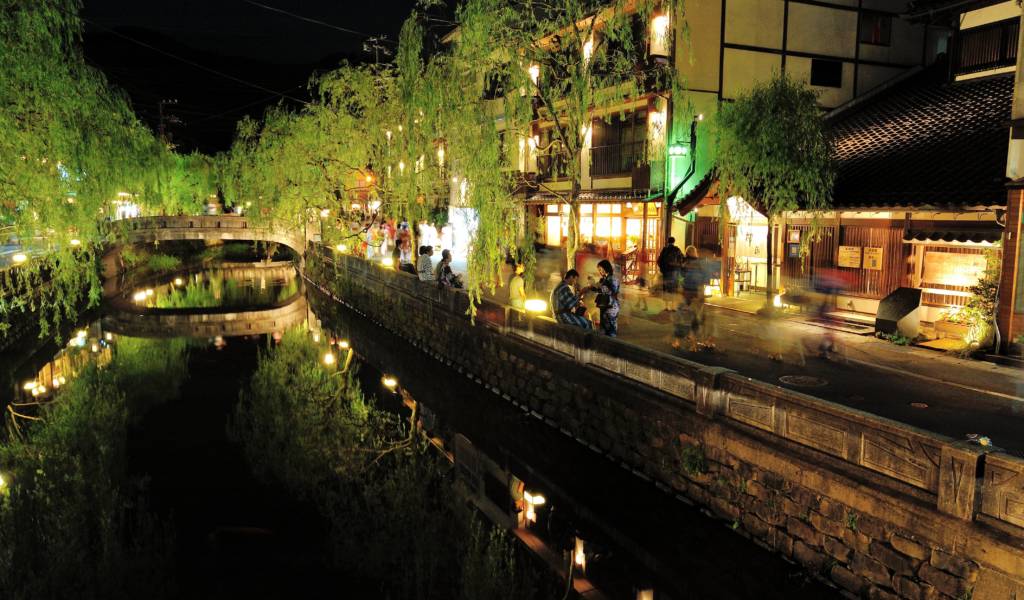 Want to compare options? Consider these other onsen worth traveling for.

Relaxing in a ryokan in Kinosaki Onsen

Kinosaki Onsen has so many ryokan (Japanese inns) that the town itself is often said to be one big guesthouse, with the streets as hallways and individual guesthouses as the rooms. As a result, people are encouraged to relax and wander around the area in their yukata (light cotton robes) as if they were still in their rooms (more on that later).

Prices vary considerably between ryokan in Kinosaki Onsen, so it’s reasonably easy to find a place that fits your budget, especially if you’re happy to stay on the outskirts of town. If you’re really looking to splash out, some of the more esteemed ryokan, like Nishimuraya Honkan, offer combo accommodation and tour packages that let you see behind the scenes and learn more about local history and architecture.

Unwinding in a hot spring

The heart of Kinosaki Onsen is its seven public baths, sharing a water source but each with its own unique style, mineral content and alleged health benefits. The idea is to take a pilgrimage of sorts to visit each bath, but you’re probably better off taking your time and just visiting a few. Be sure to visit our guide to onsen etiquette before you take a dip if you’re unsure of the rules!

It’s said that after a 1925 earthquake leveled the town, the first infrastructural thing the mayor checked was that the hot springs were still active. Only after they were confirmed safe, were preparations made to rebuild the town.

If you’re staying in any of the town’s ryokan, you’ll be given a pass to visit as many of the onsen as you like free of charge. Not staying overnight? The “Yumepa” pass gives you unfettered access to the public baths of Kinosaki Onsen for a day—a steal at ¥1,200. If you’re really pinching the pennies, there are several free hot spring foot spas. Maybe don’t get naked for those, though.

The official tourism page has some great information on each hot spring.

Another key part of Kinosaki Onsen’s appeal is the concept of sozoro. Basically, strolling around and enjoying the town in a yukata and geta (wooden sandals) is all there is to it. Don’t worry too much about the cold in winter—at a minimum you’ll be provided with a hanten (a type of overcoat) to keep you toasty.

For many Japanese people, the sound of geta clacking around the town is a romantic affair, and has nostalgic associations with well-known writers and artists like Naoya Shiga, who came to Kinosaki Onsen for inspiration.

Pro tip: If you have a date to impress, be sure to step into “Center” in the evening to try your skill at the shooting gallery and old-school arcade games. Appropriately enough it’s right in the center of town, across the road from Goshonoyu Onsen.

Renting a yukata in Kinosaki Onsen

If you’re staying overnight at a ryokan, you’ll be given everything you need to experience sozoro around the town during your stay. Should you be staying elsewhere but still want to look the part, rental shop Iroha offers men and women’s yukata rental (with all the trimmings) from around ¥3,000. And if you’re uncertain how to get dressed, they’ll also show you what goes where. The Jizoyu-mae branch has recently started offering cultural experiences too, which range from calligraphy and ikebana (flower arranging) to koto (a Japanese stringed instrument) lessons.

Once one of 4,000 playhouses made of wood and soil walls, Izushi is one of just 18 that remain in Japan today. Of those, only four—including Izushi—show kabuki. The kabuki show season runs for a mere 10 days in November, with two shows a day—so you need to either be very lucky or very deliberate in your timing to catch one. Booking a spot has traditionally been difficult for non-Japanese speakers, but groups are starting to open this cultural highlight up for the world to see.

If you can’t make it to a performance, it’s still well worth taking a stroll around the 100-year-old theater, which is only closed to visitors on Thursdays and over New Year. Be sure to go backstage and beneath the theater to learn some of the more impressive tricks of the trade.

Kinosaki Onsen is no slouch when it comes to gourmet food, but a few ingredients in particular stand out.

Throughout winter, the area is renowned for snow crabs, which you’ll see just about everywhere. A medium-sized whole crab will set you back anywhere from ¥6,000 to ¥15,000. If you’re interested in learning more about Japanese seafood, Okesho Sengyo Fish Market offers tours and cooking lessons. Alternatively, you can buy some fish at the market and head to the restaurant upstairs to let the pros do the cooking.

Known to much of the world as Kobe beef, Tajima beef is the reigning champ when it comes to luxury meat. So what makes Tajima beef so special? This particular breed of cow wasn’t initially raised for consumption, but to help out with farm work—for the most part, Japan was vegetarian back in the day. When Johnny Foreigner came along with a taste for flesh, word got around that these cows, with a higher ratio of intermuscular fat, were good eating.

Over time, these cows have become a protected specialty—only purebred, locally raised cattle of the highest quality can use the name.

Dining on a shoestring

If you’re sticking to a tight budget, you’ll see plenty of stalls selling gyuuman (beef buns) and korokke (croquettes) for no more than a couple hundred yen. They’re not going to be on the same level as the top-grade stuff, but they’re still pretty satisfying! Creezan (don’t be fooled by the handbag store downstairs) also makes a mean Tajima beef burger.

As a (not so quick) snack, you can buy eggs and cook them yourself in a natural hot spring. Depending on how well-done you like ‘em, they’ll take up to 15 minutes (there’s a handy timer), but you can also buy partially cooked eggs to save yourself a little time.

Getting there and getting around

The easiest ways to reach Kinosaki Onsen are via the JR Hashidate or Kinosaki Line, departing from Kyoto, or the Kounotori train departing from Osaka. Depending on your departing time, you may need to switch trains at Fukuchiyama. The connecting train is usually waiting on the opposite platform, so don’t be too worried if the timing seems tight!

Once you arrive, it shouldn’t take more than 20-30 minutes to walk from one end of town to the other, but during the daytime there are also a few public buses if you need them. You’ll find more information on local transport options here.

Written by: Felix Wilson
Filed under: Things to Do | Travel
Tags:
Sharing