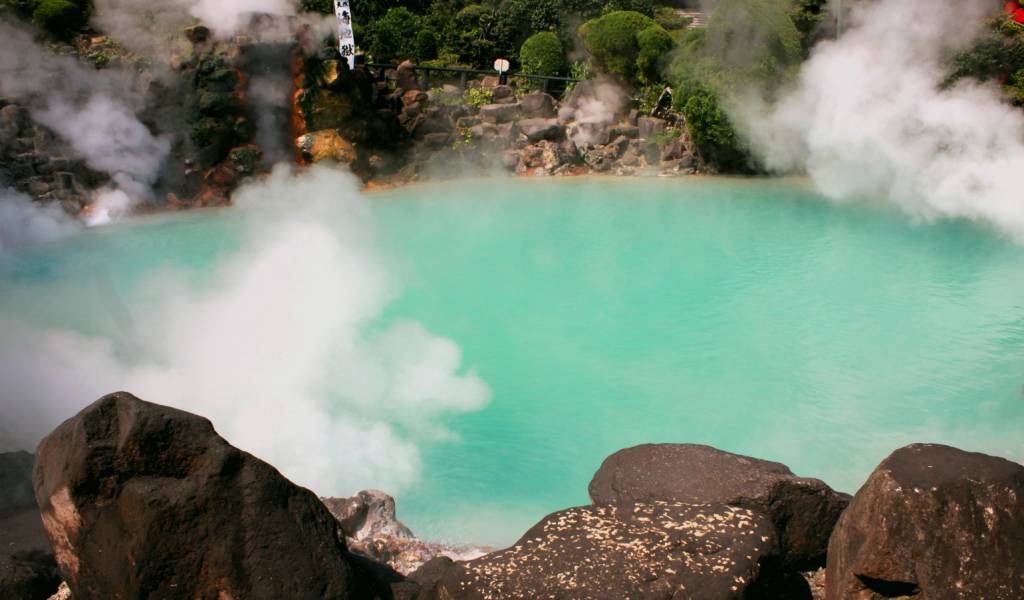 Journeying to the Eight Hells of Beppu

Beppu is a famously geothermal city on the island of Kyushu — more onsen water gushes from the ground here than anywhere else in Japan. Not all that water in the Beppu hot springs is for bathing in though; the most spectacular of the hot pools, boiling mud, and geysers make up the “Eight Hells” of Beppu and are for viewing rather than than soaking in.

At four of the hot springs — Umi Jigoku, Kamadao Jigoku, Ishionibozu Jigoku, and Chinoike Jigoku — there are “ashi mizu” baths where you can soak your feet.

How to tour Hell

All of the hot springs are located in the hilly north of the city, but in two distinct areas. Within each area you can walk to each of the hells, but the two areas are separated by about 3km. Typically people drive or take a bus between the two areas, but it’s possible to walk between the areas in about 40 minutes.

You can take a bus from the west exit of Beppu Station. You should get on a bus bound for Kamenoi (numbers 2, 5, 7, or 41) and get off at either Umijikoku-mae or Kannawa. The trip takes 20 minutes and costs 330yen.

To get to Chinoike Jigoku (Blood Pond Hell) and Tatsumaki Jigoku (Tornado Hell) you should take the number 16 bus from Kannnawa and get off at Chinoikejigoku-mae bus stop (6 minutes).

Both Umi Jigoku and Chinoike Jigoku have large, free parking lots. If you prefer to go by taxi, the fare from Beppu Station to Umi Jigoku is approximately 1,600yen.

How much does it cost?

There are two types of tickets available: a 2,000yen concession ticket that gives you access to all the hells or individual entry tickets for each priced at 400yen for adults. The concession tickets are also available at 1,350yen for high schoolers, 1,000yen for middle school students and 900yen for elementary school students. Entry to a single location is also available for 300yen, 250yen and 200yen for the same groups.

The custom is to visit all the hells, but if you just want to visit the most interesting, then Umi Jigoku, Oniyama Jigoku (with the crocodiles) and Chinoike Jigoku would suffice.