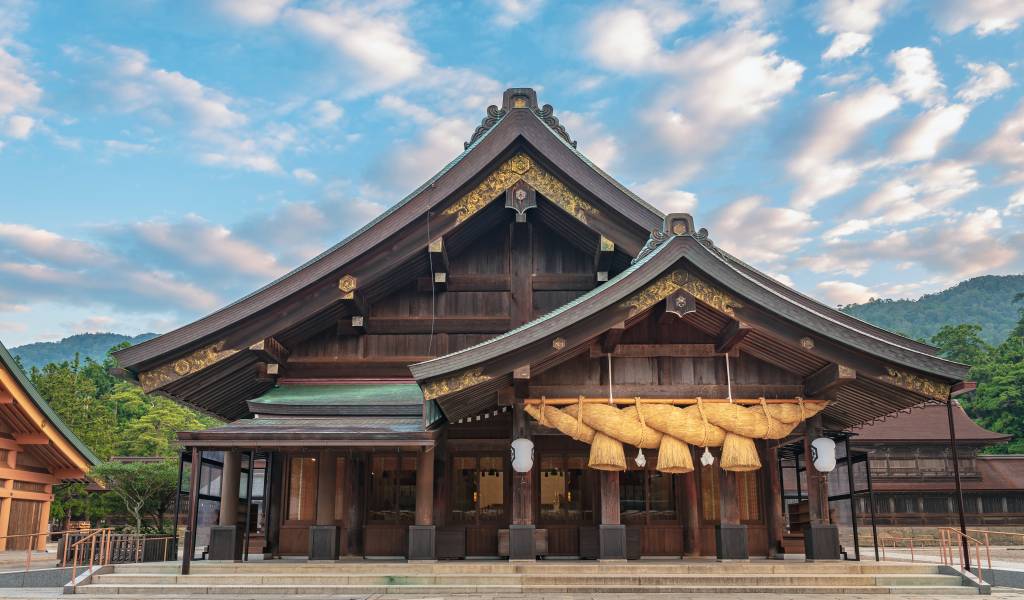 Things to Do and See in Traditional, Arty Izumo

Shimane Prefecture is one of the quietest pockets of Japan. It’s a place for those who want to escape the metropolis madness of the country’s major cities and opt for a more relaxed, contemplative and spiritual side of this diverse nation. While “art island” Naoshima has, in recent times, become the poster-child of contemporary art and culture in Japan, Shimane’s city of Izumo should be considered Naoshima’s more ‘traditional’ sibling.

Izumo is a city home to a well-connected and historically rooted community of gallery owners, artists, creators, curators, historians and family businesses all deeply entwined in the world of Japanese art. If you have a passion for history and Japanese art, or want to learn more about the feudal legacy of the country, you’ll find plenty of attractions in the coastal city of Izumo and its neighboring Matsue.

The history and spiritual legacy of Izumo

Located north of Hiroshima Prefecture, taking up coastline along the Sea of Japan, Izumo and the neighboring city of Matsue feel like two very well-kept local secrets. The areas are home to rugged mountain terrain and rolling coastlines, and the nation’s second most important shrine, and the country’s oldest, Izumo Taisha.

Before Nara and Kyoto, the Izumo region was the heart of Japan’s spiritual culture. It was the center of Shinkoku, an area known as the Country of the Gods. The legend of the Izumo was documented in the Kojiki (or Record of Ancient Matters), the oldest surviving manuscript in Japan. As new kingdoms across the nation sprouted and feudal lords reigned, and other cities became spiritual sanctuaries, Izumo stayed connected to its roots. In Izumo, you’ll find a city proud of its history but never showy, full of attractions, but not eager to offer its best features too easily. While that doesn’t make it the most effortless place to visit, it’s one of the most rewarding.

Getting to Shimane Prefecture

Getting to Shimane is best done via car or airplane, rail options are either long and confusing or expensive.

But if you ave a JR Pass, and want to use it, take the JR Tokaido/Sanyo Shinkansen from Tokyo to Okayama, then JR Yakumo Limited Express train to Matsue or Izumo. While the one-way fare is around ¥20,000, your JR Pass does fully cover the six or so hour trip, but only if Hikari trains are used between Tokyo and Okayama (the faster Nozomi trains cost extra)—so do your homework and plan it out.

Alternatively, JAL runs multiple daily flights between Tokyo’s Haneda Airport and Izumo Airport; the journey takes 90 minutes. The fare varies depending on the day and demand.

You’ve got a fair few options for night buses, which take about 12 hours from Tokyo to Shimane.

Willer buses service the area; the journey costs between ¥6,720–¥9,200 depending on the day. If you want to save money, consider buying a 3-day Willer Bus Pass and using that.

Meet with the gods at Izumo Taisha

According to folk legends, eight million Shinto gods make their way from across the map to Izumo Taisha. Each year on the 10th to the 17th day of the 10th lunar month (which is typically November), these eight million gods hold their annual meeting to determine the fate of the population. The event is known as Kamiari zuki—the Month of the Gods.

While there are no records of when the shrine was built, Izumo Taisha is generally considered to be the nation’s oldest shrine still in existence. According to the nation’s earliest chronicles, it existed before the year 700. While the Kamiari zuki celebrations are the most popular time to visit, this site is busy all year round, with visitors buzzing around the approach to the shrine, exploring the shopping street lined by stores and restaurants, soaking in the history, and admiring the shrine’s lush natural surrounds.

Like its contemporary, Ise Shrine, Izumo Taisha used to be rebuilt periodically as part of a sacred tradition, however from 1744, the tradition subsided, and today there are just major renovations once every 60 years or so.

Access: Catch a bus from Izumoshi Station, buses depart every 30 minutes and the journey takes about 25 minutes and costs ]price amount=520].

Pay a visit to Inasa Beach

Also slightly reminiscent of Ise’s famous Meoto Iwa (Wedded Rocks) in Mie prefecture, Izumo’s Inasa Beach is home to a small rock island with its own torii gate. This photogenic site is particularly stunning in the evening during Izumo’s picture-perfect ocean sunsets.

In summer it’s a popular swimming spot. On the first morning of every month, locals visit the beach to take water from the ocean using a bamboo ladle and visit the shrines on the way to Izumo Taisha. While it’s a long-held tradition in the Izumo Taisha area, anyone is welcome to participate.

Access: The beach is a 30-minute walk from Izumotaisha-Mae Station

The Tezen Museum is a must-visit of Izumo’s art destinations. The historical art gallery was founded in 1993 by the Tezen family, a long-serving and influential Izumo family. Back in 1686, when the founding patriarch of the family settled on this property, he first ran a sake brewery on the site, which continued until 1868. That’s why the museum is not so much like a regular museum, but is made up of two main exhibition areas; one in a rice warehouse, and the other in a liquor storehouse.

Inside the first exhibition hall, you’ll find displays showcasing Japanese art and crafts like hanging scrolls, folding screens, and materials used in traditional Japanese tea culture. The second exhibition hall is home to a diverse selection of ceramic wares and lacquerwares, including the rustic Rakuzan-yaki, as well as the more delicate Fujina-yaki. Take a stroll around the grounds, and you’ll also find a small on-site theatre that still hosts live performances.

Enjoy the view from the top of Matsue Castle

Technically part of Matsue city, not Izumo, but still close enough to visit, Matsue Castle is one of Japan’s 12 original castles. It was completed in 1611 and was the home to Matsudaira clan, a branch of the Tokugawa clan, which ruled the area at the time. It’s also colloquially known as the “black castle”. It is open to the public throughout the year.

You can step inside the main keep and admire the displays showcasing the history of the castle and the wider Matsue area. But the biggest attraction is the view from the top, from here you’re given incredible rolling views of the Matsue city and the nearby Lake Shinji.

For a small admission fee, you can enter and can climb the tower to see (on a clear day) the remote Oki Islands of Shimane, which are about 50 kilometers out to sea. Also not far from the lighthouse, a little farther south down the coast of Cape Hino sits a small community of delightfully kitsch gift stores run by local grandmas grilling squid out on the street.

Kanden-an teahouse was built in 1779 in a garden of a home belonging to one of the subordinates (or vassals) of the legendary Japanese daimyō and tea ceremony master Lord Matsudaira Fumai. As well as being a place for the lord to drink tea, it also housed a bath so Lord Matsudaira Fumai could soak and unwind after a long day plotting political moves.

Long after its construction in 1996, it was moved to its current site. In 2019–2020, the tea ceremony house underwent some extensive renovations to bring it back to its former glory.

It’s now open to the public, and guests can pop by for tea and wagashi, traditional Japanese sweets, while admiring the surrounding garden and pretending to be the great Lord Matsudaira Fumai himself.