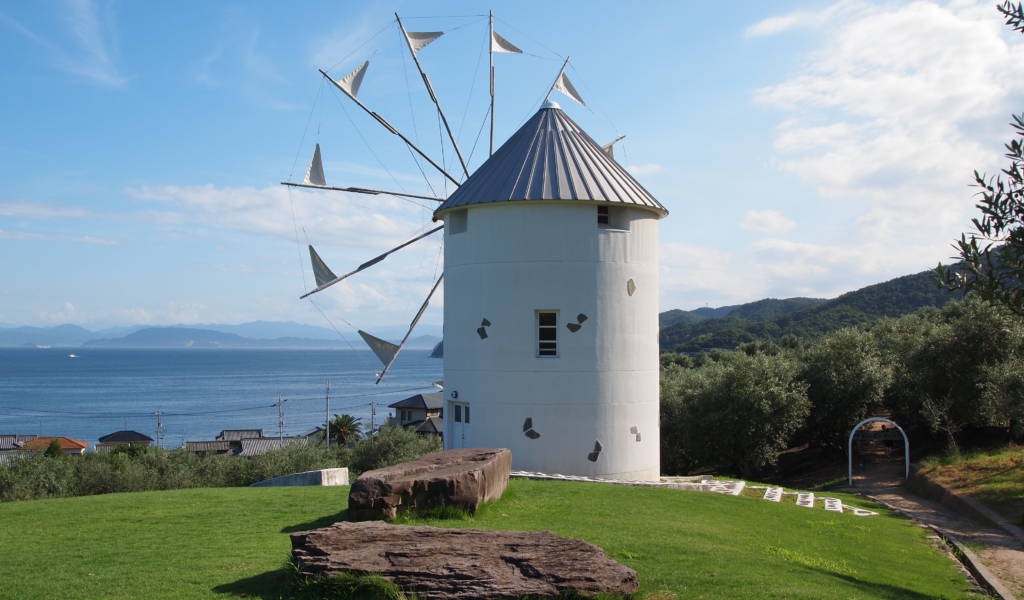 Nearly 3000 islands dot the Seto Naikai, or Seto Inland Sea, in the Setouchi region of western Japan. Shodoshima, part of Kagawa Prefecture, is the second largest of them (after Awaji), and one of the only islands to offer much in the way of elevation. At 153 square kilometers, there are enough attractions and variations in terrain to make the island a tempting destination for both casual and more serious cyclists.

The island strikes a balance between nature in abundance and enough development to make a trip convenient, without ruining the views. And Shodoshima is one of the sites for the Setouchi Triennale, which begins in April 2019, so you can combine nature and art for a trip that satisfies body and mind.

Shodoshima is accessible by a battalion of ferries. There are six ports over the island, with regular ferries from Takamatsu, Okayama, Teshima, and Himeji.

The most convenient route is probably the Takamatsu to Tonosho Port ferry. Takamatsu Port is directly adjacent to Takamatsu Station, taking only three minutes on foot. The ferry takes an hour (¥690), or take the speedboat if you’re in a rush (¥1,170, 30 minutes).

Hardcore cyclists, and there are plenty on this island, can bring their own wheels on the boat (¥360 from Takamatsu).

If you don’t have your own bike, never fear. There are several bicycle rental options around the island, like the tourist information center at the Tonoshu Port, which has regular bikes for ¥500 a day.

In addition to the standard options, Shodoshima has just rolled out a new bike sharing program called Hello Cycling. Membership is free, and the system is nationwide, so once you have an account, you can use it across Japan. Currently, the homepage and the application are in Japanese, but if you go to a staffed station (at Tonosho Port Tourism Center, Shodoshima Olive Park Michi no Eki, or 24 Eyes Movie Village), they will take you through the process in person. A Hello Cycle representative told me they are planning to have the interface translated into English ahead of the Triennale.

With 50 stations around the island and 200 bicycles, it’s easy to pick up and drop off a bike. Because the island is so hilly, all bicycles have power assist. Even the less-buff among us 😎 can ride without throwing in the towel and pushing the bike up that steep hill! Rental for 15 minutes is ¥100, and 24 hours for ¥1,500. You can rent up to four bikes with one account.

Payment can be made by registering a credit card with the app, registering an IC card (such as Suica or Pasmo), or loading a Hello Card (available on Shodoshima) at one of the aforementioned staffed stations.

From there, you can reserve a bike through the app, or tap your IC or Hello Card on the panel mounted on the handlebars in order to check out a ride.

Places to see in Shodoshima

Shodoshima has about 126 kilometers of coastline, most of which can be cycled. One the most fetching attractions on the coast is the Angel Road, a chain of three small islands connected by a sandbar only walkable at low tide, twice a day. If you time it right, you can walk out to the farthest island; just don’t linger too long or you won’t be able to get back.

Inland, the Kankakei, or Kanka Gorge, soars up to the island’s heights, with views of the dramatic and colorful gorge, sweeping coastal vistas, and the highest point on Shodoshima, the adjacent Hoshigajo Mountain (817 meters). The gorge is accessible by road or ropeway, and is part of the Seto Inland Sea National Park. Continuing down the road that runs through island’s center, you’ll hit the Ushikushi-no-hara Plateau, which offers more panoramic views.

Down the road is the Choshi Gorge and Waterfall, which is home to a wild monkey park. The park has 500 monkeys that live in the mountains but come down for food and play. The majority of the monkeys are wild and live without cages. However, there are a few caged animals, mostly those that were orphaned early and couldn’t assimilate into the troop.

You may also notice olive trees growing around the island. Olives were planted here in 1908, and Shodoshima, with its Mediterranean-like climate (warm weather and little rain), was the only place in Japan where they thrived. Today, you can find olive oil, preserved olives, and beauty products for sale, grown and created right here. There’s an Olive Park on the southern coast near Kusakabe Port, but you’ll find trees and olive products all over Shodoshima.

There’s lots more to discover on Shodoshima. Two towns contain much of the island’s 30,000 person population, and there are beautiful terraced rice fields built into the hillsides. There’s also a miniature version of Shikoku’s 88 Temple Pilgrimage. So strap on your fanny pack, and get pedaling!

Written by: Selena Hoy
Filed under: Things to Do
Tags:
Sharing