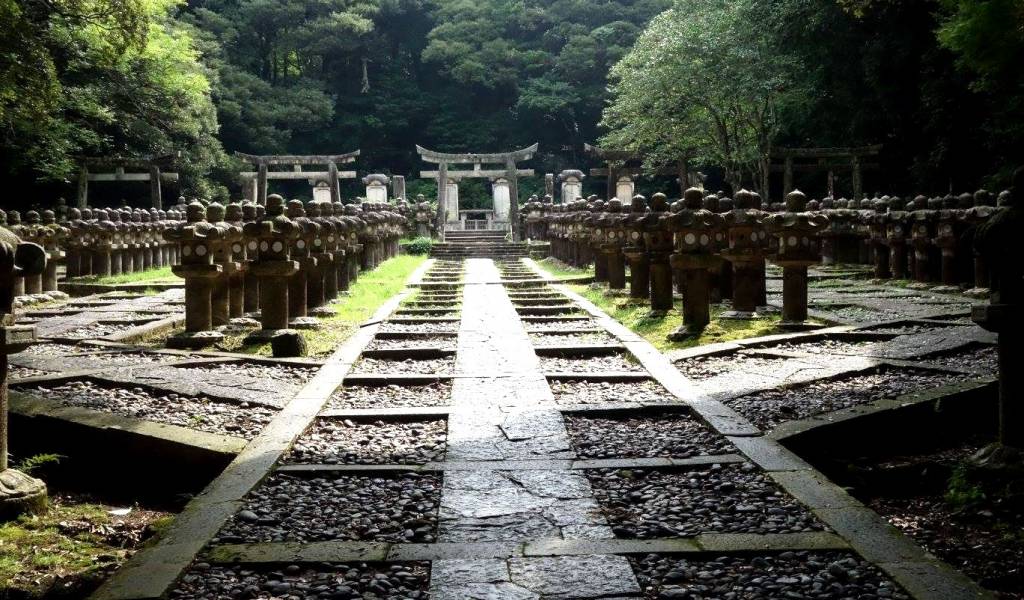 Travel Back in Time: A Hagi Superguide

Hagi prides itself on being a city where you can still use Edo-period maps, and it truly is a step back in time. Having been spared significant damage during the war and from natural disasters, the layout of the castle town remains unchanged to this day. Small streets lined with cross-hatched namako walls and samurai houses, traditional potteries and stunning castle ruins make Hagi a wonderful place to get a real hands-on experience of traditional Japan.

There is no shortage of things to see here, so renting a bike is a great way to start. Otherwise, there are circular bus routes which can take you to most spots, so don’t worry if bikes aren’t your thing.

A seemingly typical shrine at first, Shoin Jinja houses the home, school and remains of one of Japan’s most important characters.

Yoshida Shoin advocated Western learning and openly challenged the ruling shogunate, so much so that he was eventually put to death for the failed assassination attempt of a shogunate official. Born in Hagi, he was persecuted for trying to go overseas without permission during Japan’s lock-down era, and ran a small school, teaching students who went on to be pioneers of the creation of modern Japan. He died before the Meiji period, but is regarded as a patriot of Japan who sacrificed himself for the country he loved.

Within the shrine compound you can visit his former home where he spent his time under house arrest as well as the small school building of Shokason Juku School, where he gave lectures after being released. Portraits of his illustrious students are hung within, as a reminder of his legacy in Japan’s history.

As at most shrines, you can collect your fortune, but here they come written on small umbrellas, and the bushes nearby are dotted with the colorful remainders of those who received bad luck.

There is also a history museum and the shrine’s treasure hall, but they offer little information in English.

Offering a serene step into nature, Tokoji Temple is in the tranquil woods of Hagi, with nothing to interrupt your wanderings but the occasional bird call. The Chinese-influenced architecture of the temple as well as the red outer gate and larger wooden inner gate make it an imposing and unusual sight. The main hall is built in the Chinese Zen architectural style and houses a Buddha statue.

On August 13th a lantern festival is held at Daishoin Temple from 7pm to mark the return of the spirits of the dead to the land of the living. A similar but slightly smaller version is held at Tokoji on the 15th, and are amazingly atmospheric evenings (shown in the very first picture).

Tokoji Temple is a short walk to the east of the Shoin Shrine to the east of Higashi-Hagi Station. You can cycle from the station in about 10 minutes but walking takes about 30. It is also on the Maru Bus East Loop.

Walk Hagi’s streets in a kimono

While in Hagi, you can make the most of your Edo-period surroundings and enjoy a traditional kmono fitting, before strolling through the streets in your full outfit. The Kimono Style Cafe offers kimonos for men and women, with a wide variety suitable for each season. You must book in advance, and the Japanese owner will dress you with the full obi belt and padding. Be prepared to be somewhat ignored regarding preferences and to be manhandled slightly; the owner knows a lot more about kimonos than she does about manners.

The walking around is much more fun, and you can see the traditional streets, the preserved houses and beautiful gardens that line the streets nearby. If you walk down along the road and turn left there is a particularly nice garden. There are many different shops offering kimono services in Hagi, so take your pick!

With all this walking you’re bound to work up an appetite, and Hotoritei is perfect. With delicious lunch sets and a beautiful garden, you can enjoy locally sourced meat, fish and vegetables in traditional dishes which will power you up for the rest of the day. The owners also have an Irish pub called Sams which is open in the evening and is a great spot to meet people and relax.

The art gallery/museum was founded in 1996 to care for and display the amazing pottery and print collection amassed by Hagi-born entrepreneur Toshiro Uragami. The pottery displays are excellent and include local Hagi examples dating back 400 years, as well as Chinese and Korean displays and contemporary work.  The two collections are linked in a monthly pairing of two works, with a similar theme or style, as chosen by the curator. During our visit the best print in existence of Katsushika Hokusai’s Court Lady and Young Woman with a Foreign Telescope, who had been positioned carefully to gaze upon the Korean pottery choice, featuring a moon design.

The print section is on a monthly rotation in order to protect the pieces which are stored for a year before being displayed again. The collection we saw showed amazing variety and many highly recognizable pieces including Hokusai’s The Great Wave, Hiroshige’s Fox Fires from the 100 Views of Edo and countless others.

Not only are the selections great, the quality is astounding, with many considered the best copies in the world. With a visual display on how wood prints are made, the gallery highlights the complexity and detail behind the prints.

Throw some shapes at Jozan Pottery

Hagi is famed for its pottery, considered the second best in Japan (can’t win them all), and you will see it proudly displayed everywhere you go, with over 150 potteries in the city. If looking at pottery isn’t the most appealing to you, I can pretty much guarantee there is no one who doesn’t enjoy getting their hands dirty and making some themselves. With movie scenes springing to mind, we headed to Jozan Pottery to try our hand at pottery making and to be taught by the master.

Jozan Pottery stands out as it is made in a climbing kiln which has an element of unpredictability to it, leading to a more diverse finish on the pieces it fires. The business is run by a father and son; we were taught by Kaneko Nobuhiko, who left school at 15 to learn the craft. Having grown up near the Shouin Shrine, he was inspired and would make statues of the progressive teacher at school, which were so admired by those around him he dropped out to focus on his work. His son now works alongside him and his award-winning pieces have been exhibited internationally. (So we were learning from the best, basically),

We got our aprons on, and chose our pieces, basing it on what food we liked the best—so a donburi bowl, a ramen bowl and a wide salad bowl were slowly formed, with a little more than a guiding hand and lots of laughing (movie scenes stayed throughout). You can also make cups, saucers and other pieces.

If your work is considered too perfect, you may be encouraged to add a touch of wabi-sabi, the Japanese world view centered on accepting transience and imperfection based on Buddhist teachings. This may sound complicated, but it basically means jabbing the bowl with your thumb to give it some character. While one of us was encouraged to do this, I was not, and couldn’t decide if I should be pleased at having naturally achieved imperfection. I dwelled, and eventually moved on.

You can write your name and address and have the items sent to a Japan address if you cannot stick around for the whole process, as it takes approximately a month for them to reach you. Alternatively, you can opt to paint a ready-made piece and have it glazed and ready to collect the next day.

Once you have created your imperfect masterpiece, you can enjoy the gallery of his works and peruse the vast shop filled with traditional pieces. A lovely selection of small cups with family crests make a particularly interesting  option, along with the brightly colored bowls, cups and plates.

Opening hours: 8am-5pm, but you must arrive by  4pm for classes which can be reserved over the phone (Japanese needed for this, but not really the class).
Fees:Decoration class costs 945 yen, hand-rolling a piece is 1,680 yen and a traditional wheel piece is 5250 yen.
Tel: 083825-1666
Address: 31-15 Horiuchi Nishi-no-hama, Hagi, Yamaguchi, 758-00057
Access: Eight minutes by taxi from Higashi Hagi station or 12 minutes on the Maru Bus West Loop from Hagi Bus Center and alight at Hagijyo Shigetsu-koen bus stop.

These are just our top picks for Hagi, but it’s the perfect town for exploring, so you’ll be sure to find plenty of surprises and secrets along the way. It has a beautiful beach, city museum and plenty more, so if you want to step back into a traditional Japanese city—look no further.

From Tokyo: You can fly from Haneda to Yamaguchi Ube Airport and travel to Hagi bus center by bus (1h 30 minutes). If you have the JR pass you can travel to Shin-Yamaguchi Station by JR Tokaido-Sanyo Shinkansen Line, and then travel 1h 25 min from Shin-Yamaguchi to Hagi Bus Center by bus.

From Osaka: It takes approximately 2 hours from Shin-Osaka to Shin-Yamaguchi Station by Shinkansen, and then the same bus journey as above.