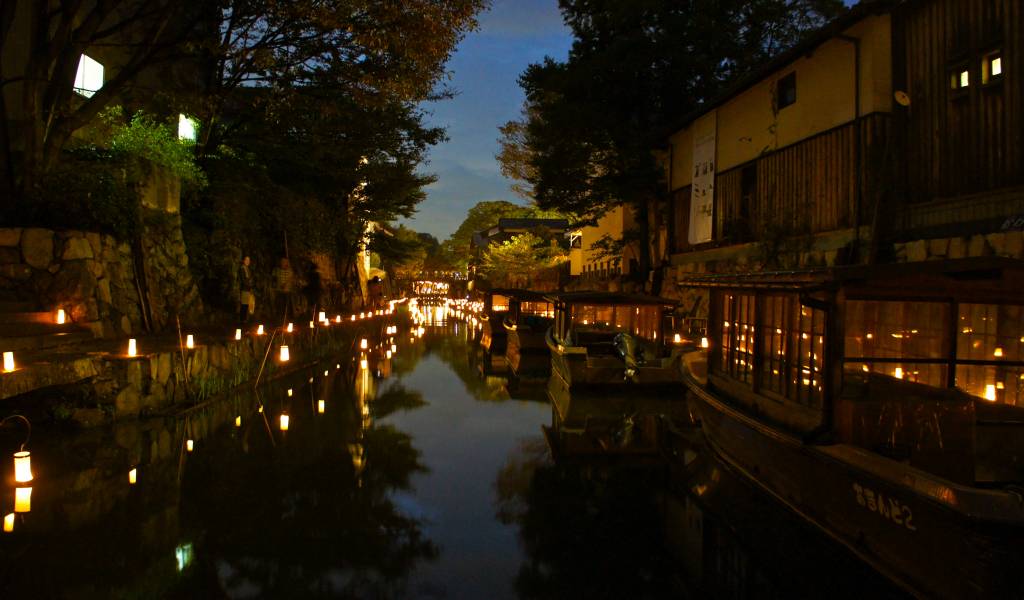 Located near the banks of Lake Biwa, on the road from the ancient capital of Kyoto to the castle town of Hikone lies the region’s own miniature Venice that breathes an atmosphere of the Edo period. Omihachiman, with its beautiful historical buildings and canal, is one of those very rare off-the-beaten-path discoveries in Kansai.

Following the path of the Omi merchants

Azuchi Castle, which you can still visit today (although only the ruins remain of its once formidable keep), is said to be the largest multi-story building of its time. The Omihachiman region, under the castle’s protection, flourished due to its key position along the Tokaida and Nakasendo roads to Kyoto. Thus, Omihachiman became famous throughout Japan as the birthplace of the “Omi merchants” who were some of the most successful entrepreneurs at the time. Unlike the business world of today revolving around maximizing profits, the Omi merchants based their enterprise on trust. They did not lend money for their business nor did they take advantages of shortages of particular goods, rather their aim was to supply the needs of the people and gain their respect. The Omi merchants were also generous donators, giving to shrines, temples and civil projects throughout the region to give back to society. Their homes in Omihachiman are beautiful examples of more unique styles of the Edo period’s architecture with their lattice windows, protruding pine trees and unusual shaped roofs. When dusk sets in, the district bathes in an atmosphere bringing you back to those Edo days with its old street lights.

Omihachiman’s most striking feature, its canals, finds its history during its mercantile past as a way for merchants and craftsmen to easily transport their goods across Lake Biwa. The white plastered storehouses and merchant homes along the canal with trees hanging over the edges of their gardens turn the canal into one of Kansai’s most beautiful sights, in particular in autumn as the leaves change and spring when the flowers blossom. You can easily walk along the canal and take your time enjoying the view or choose to take one of the inexpensive boat rides offered for a few hundred yen.

Along the canal you will also find the torii gate leading towards the shrine Himure Hachimangu. As the town’s main shrine, it hosts the Sagicho Fire Festival established by Oda Nobunaga each year in March during which elaborate floats made from straw, bamboo and paper compete to be regarded as the best—only to be ceremoniously burned later that evening.

Passing the shrine, there is a ropeway which takes you up to Mount Hachiman for 800 yen (return). On top of the mountain once stood the second half of Himure Hachimangu, yet it had to make room for Hachiman Castle at a later date. Although nothing remains of the castle today, Mount Hachiman offers a stunning view over Lake Biwa.

Behind Mount Hachiman towards Lake Biwa, hidden amongst the woods surrounding the banks of the lake lies Chomeiji. The Buddhist temple is said to aid longevity and is the 31st temple pilgrims visit on their Saigoku pilgrimage taking them to 33 temples in western Japan. It takes about 15 minutes to reach Chomeiji from Mount Hachiman to start your approach to the temple consisting of 808 stone steps. Once you have overcome this quest, you are free to roam through the temple grounds with its main hall, three-storied pagoda and enter the bell tower offering you another view over Lake Biwa.

From Kyoto Station take the Tokaido-Sanyo line towards Nagahama and get off at Omihachiman Station—just under 700 yen in half an hour. Coming from Osaka Station will take you about an hour and a half and cost just under 1,500 yen: take the Tokaido-Sanyo Line to Yasu Station, transfer towards Maibara, and get off at Omihachiman Station. From there you can make it to the old district by cab or the cheapo-approved walking option. Be sure to pick up an area map at the station.

A cheapo’s dream comes true with regards to admission fees as, quite simply put, there are none.