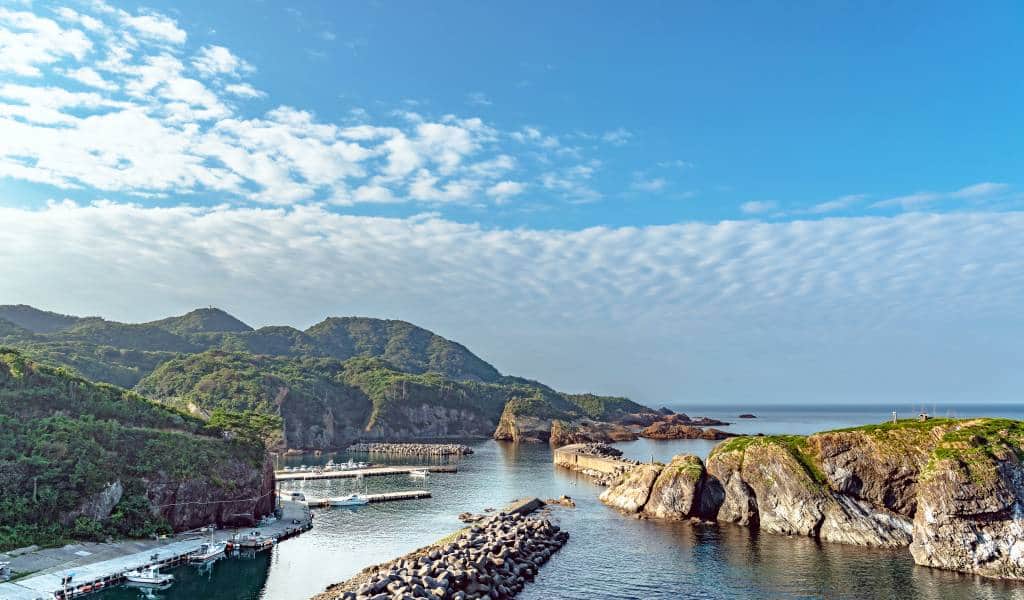 Shimane is a fascinating and, at times, enigmatic coastal prefecture. It runs along the Sea of Japan flanked by Yamaguchi and Tottori with Hiroshima to the south.

After Tottori, Shimane is the second least populated prefecture in Japan. After Mie, it’s also Japan’s most spiritually significant, offering a sense of space and tranquility not found in the nation’s more populated pockets.

The capital of Shimane is Matsue, surrounded by two major lakes, Lake Shinji and Nakaumi, and the Sea of Japan. Matsue is often known as “water city”. Matsue Castle, one of Japan’s last 12 remaining castles, is the capital’s shining gem. Completed in 1611, it was predominantly home to Matsudaira clan, a branch of the Tokugawa clan, which ruled at the time.

Next door to Matsue sits Izumo, an area known for its historical and artistic relics showcasing the area’s deep love of culture. Izumo Grand Shrine (also known as Izumo Oyashiro or Izumo Taisha), founded in the year 700, is Japan’s second most important Shinto shrine. According to folk legend, this site is home to the annual meeting of Japan’s gods.

Beyond castles and shrines, this region is also home to local art galleries like Tezen Museum, sightseeing attractions like Izumo Hinomisaki Lighthouse and Inasa Beach, and unique cultural relics like the silver mine Iwami Ginzan, located in Oda city, just west of Izumo. A little deeper inland is the historic samurai town Tsuwano.

With its picturesque beauty and proud appreciation for culture, it’s no surprise that this corner of the map has also spawned a vibrant art community and, most notably, a diverse ceramic scene.

In Izumo and Matsue, a love for traditional art flourishes. The area is home to many established businesses, galleries, and workshops passed down through generations.

The Tezen Museum is a must-visit of Izumo’s art destinations; it hosts displays showcasing Japanese art and crafts like hanging scrolls, folding screens, and ceramics and materials used in traditional Japanese tea culture. The art gallery was founded in 1993 by the Tezen family, a long-serving and influential Izumo family. The site was established in 1686 when the founding patriarch of the family built a sake brewery on the site.

Ceramics are the cultural backbone of the area. It’s here contemporary artists like Ken Mihara, and kilns like the Sodeshi Kiln continue a local legacy that saw the evolution of some of the form’s most significant movements including Fujina ware, and Rakuzan ware.

For a deeper dive into this world, head to the Tanabe Museum, near Matsue Castle, to learn more. Be sure to add Shimane Art Museum (right by Lake Shinji) to your visit too; this avant-garde space was designed by modernist architect Kiyonori Kikutake. Inside you’ll find an eclectic collection of art old and new, both local and abroad.

From Tokyo, getting to Shimane is best done via car or airplane because rail options are either long and confusing or expensive.

However, those with a JR Rail pass can take advantage of the JR Tokaido/Sanyo Shinkansen from Tokyo to Okayama, then JR Yakumo Limited Express train to Matsue or Izumo. Typically the one-way fare is around ¥20,000. Note: the JR Pass fully covers the journey if Hikari trains are used between Tokyo and Okayama (the faster Nozomi trains cost extra).

There are also bus services between the areas. Bus company Willer travels between Tokyo and Shimane regularly. The journey costs between ¥6,720–¥9,200 depending on the day. If you want to save money, consider buying a 3-day Willer Bus Pass and using that.

A better way to explore the prefecture would be combining it with a trip to Hiroshima. Multiple buses leave Hiroshima Bus Centre for Shimane daily. The trip takes 3.5 hours and costs ¥8,000 return. You can also use your JR Pass for most of these bus services between Hiroshima to Izumo. Visit the Hiroshima Bus Centre to purchase your ticket.

In the past, Shimane Prefecture has offered an incredibly cheap ¥500 JR Hiroshima Station to JR Matsue Station discount highway bus pass service for foreign guests visiting Japan. While the current promotion ran until March 31, 2020 it’s worth contacting a designated ticket counter to see if they have renewed the promotion. There are details on ticket counters on the Kankou-Shimane website.

JAL runs multiple daily flights between Tokyo’s Haneda Airport and Izumo Airport; the journey takes 90 minutes. The fare varies depending on the day and demand.

All Articles about Shimane

Things To Do in Shimane

Getting Around in Shimane