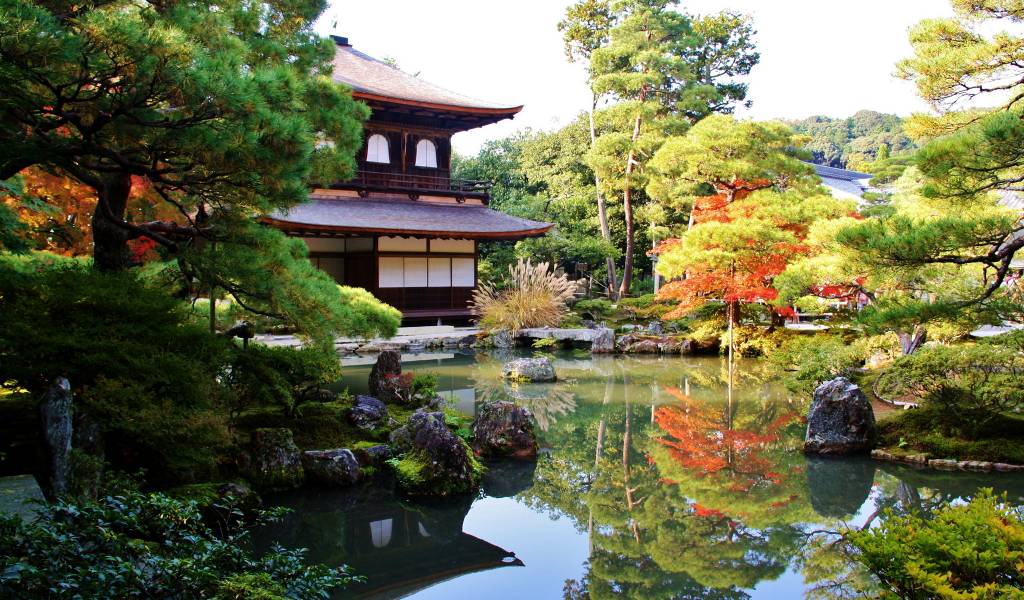 If Japan’s ancient capital is on the top of your travel hit list, but you’re not sure where to begin, here’s the starter’s guide to 12 Kyoto top attractions!

Kyoto has enough to keep you entertained for weeks, but if you’re on a whirlwind tour or just want to make sure you don’t miss anything major, look no further. Once the capital of Japan and considered today’s cultural capital, the city has not shortage of temples and shrines, but there are markets and bamboo forests to explore too.

Instantly familiar from the cover of every Kyoto guide book, Kinkakuji is maybe better known as the Golden Pavilion. A Zen temple destroyed on multiple occasions (once by an enraged monk who set it alight), the current iteration was built in 1955.

Perched beside a lake and surrounded by well-manicured gardens, the gold-leaf-covered temple is best visited when it opens in the morning as it is a tad quieter. If you have time, enjoy some green tea and a small gold-leaf-dotted wagashi sweet in the garden tearooms.

Suggested Activity
Tokyo to Kyoto Return Shinkansen + 1 Day Kyoto Pass
Save up to 22% over the regular fare for a non-reserved round-trip ticket on the Shinkansen from Tokyo to Kyoto and get a 1-day subway and bus pass too! *Restrictions: Available only to tourists on a temporary visa and those accompanying them. ...
Click here for details

Access: Kinkakuji is best reached by bus, catch the 101 or 102 buses from the station or any other with Kinkakuji on the front! It takes around 45 minutes, so bring a book.

Follow the famous trail of red gates as far as you can manage up the sacred Mount Inari. The main shrine will welcome you from the station, with a huge 16th-century torii gate, the main shrine buildings and plenty of food stalls.

Dedicated to Inari—the Shinto God of rice—the shrine predates the transition to Kyoto as the capital of Japan. Believed to be the messengers of Inari, foxes make plenty of appearances throughout the area so keep an eye out for them. The most densely layered gates are found early on in the trail, so don’t worry about hiking the whole way to the top if you don’t have time.

Well known for its wooden veranda with stunning views of Kyoto, Kiyomizudera is a highlight of the city and the perfect way to end a walk through Higashiyama.

Meaning “Pure Water Temple”, it was built close to the Otowa Waterfall and is now part of the Kita Hosse sect of Japanese Buddhism. As well as admiring the view both from and of the temple, you can pray for love at Jishu Shrine behind the main hall and choose between longevity, educational fortune or luck in love by drinking from one of the waterfall’s three streams.

Please note, the main hall is under construction until March 2020 and is covered by scaffolding.

Access: Kiyomizudera is a 15-minute walk from Kiyomizu-gojo station on the Keihan Railway Line or can be reached on the number 100 or 206 busses from the Station.

4. Stroll the streets of Higashiyama | 東山

For that ancient-Kyoto feel, Higashiyama has narrow, winding streets, traditional shop fronts and beautiful shrines and pagodas to admire. The pagoda of Hokanji Temple and the brightly coloured kukurizaku (colourful decorative balls) of Daikoku-san Kongo-ji Koshin-do (or Yasaka Koshindo for short) are some of the highlights, but exploring is the best part.

The most popular and photogenic streets are Ninnen-zaka and Sannen-zaka which feature restored wooden-fronted tea houses, shops and restaurants. These streets are close to Kiyomizudera and the walk between is one of the highlights of any trip to the city.

Access: Higashiyama is located between Yasaka Shrine and Kiyomizudera, best accessed from either Gion-shijo, Kawaramachi, Higashiyama orKiyomizu-gojo stations. Buses 100 or 206 will take you to Kiyomizudera and you can explore from there.

Stroll through the famous and picturesque bamboo forest and enjoy one of the top 100 soundscapes of Japan. With swaying trees and shady pathways stretching up to 500m, you can explore the hidden spots around Tenryuji.

Be sure to visit Nonomiya Shrine to make a wish on the tortoise stone and admire the beautiful heart-shaped ema. If you know anyone getting married or expecting a child, this is a great place to buy a small charm to wish them luck (or yourself!). The bamboo forest is extremely popular of course, so if you want to see it at its emptiest, arrive early!

6. Fill up at Nishiki Market | 錦市場

Squeezing over 100 shops into a five-block street, Nishiki is nicknamed Kyoto’s Kitchen, and certainly delivers on the food front. Originally a fish market started in 1310, today you can find stores that have stayed in families for generations, with traditional Japanese foods like pickled vegetables, locally grown rice and dried fish.

Many stalls offer tasters and there are plenty of stalls serving fresh food from steamed buns to homemade tofu and you can even try a quail-egg-stuffed mini-octopus!

Access: On Shijo Avenue, Nishiki is close to Shijo station on the Karasuma Subway line and Kawaramachi Station on the Hankyu Line.

Often known as the quieter counterpart of the Golden Pavilion, Ginkakuji (the Silver Pavilion) is a Zen temple with a more toned-down style. Originally a retirement villa styled after Kinkakuji, it’s believed to have been named after the sight of the moonlight reflecting on the thatched roof.

Converted into a temple in 1940, it was a hub of cultural development including the progression of tea ceremony, flower arrangement and Noh theater. The Sea of Silver Sand contains the carefully constructed cone known as the moon-viewing platform and the moss garden is equally beautiful.

Access: You can either walk the Philosopher’s Path from Nanzenji (around 40 minutes) or catch the number 5, 17 or 100 busss from Kyoto Station.

Home to Japan’s most famous rock garden, Ryoanji is a Zen temple under the Rinzai sect of Buddhism and was originally an aristocratic villa. The garden features 15 different rocks and it is thought to be impossible to see them all at once, although if you manage it you will be enlightened. There’s also a beautiful garden and pond to explore and a restaurant which specializes in yudofu —boiled tofu.

Access: The temple is a few minutes on the bus from Kinkakuji or around 10 minutes walk from Ryoanji Station on the small Keifuku Kitano line.

The most famous of the five hanamachi (flower towns) of Kyoto, Gion is a well-known place for geisha-spotting. Gion is filled with ancient ochiya (teahouses) and ryotei (restaurants) who host high-class evenings of entertainment. Many won’t accept new customers, so you may have to stick to street-watching if you are keen to catch a glimpse of the mysterious women (but be respectful, they are often surrounded). With or without the elusive figures, Gion is a beautiful area to explore day or night, with a traditional atmosphere and popular with couples for a stroll after dinner.

Access: Gion Shijo Station is the closest option for those arriving by train and buses 100 or 206 can also take you close by.

The most important Buddhist Ttemple in Arashiyama, Tenryuji is a UNESCO World Heritage Site. Built to appease the spirit of an emperor in 1339, various disasters have lead to re-building, but the garden has survived and remains a beautiful example of Zen design. With a central pond and the Arashiyama mountains forming an equisite backdrop, the view is perfect for a stint of contemplation, and exploring the grounds is a relaxing journey into nature.

A peaceful place to reflect, the Philosopher’s Path runs along the canal in the Higashiyama district and is covered with cherry blossom in spring. It is beautiful throughout the year however, and is lined with the occasional cafe or shop with detours to shrines and temples along the way.

The path stretches between Ginkakuji and Nanzenji and is around 2km long. One of Japan’s most respected philosophers, Nishida Kitaro, would walk this path to university each day and practice meditation, giving the path its name.

Access: The path is located right next to Ginkakuji which can be reached by buses number 5, 17 and 100 from Kyoto Station.

Just across the Kamo River and the welcoming gate to the Higashiyama district, Yasaka Shrine is well known for festivals, weddings and hanami parties in the city. Founded over 1,300 years ago, it is home to the most famous festival in Japan—the Gion Matsuri—which takes place every July. The shrine is surrounded by Matsuyama Park which is great for cherry-blossom viewing and contains Shoren-in Temple, a spot with close associations to the Imperial Family dating back to the 12th century.

Access: The shrine is a few minutes walk from Gion Shijo station on the Keihan Main Line.

Only have a weekend in Kyoto? Read our sightseeing itineraries for city’s east and west sides.