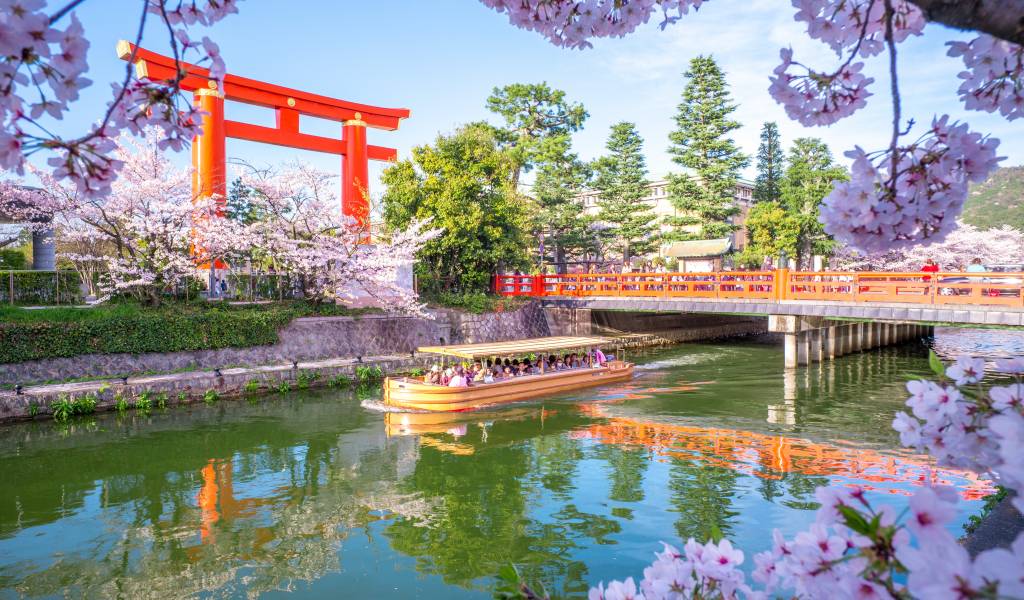 Kyoto is known for its hundreds of temples and shrines dotting the city. Quite a few are UNESCO World Heritage listed, and even those that aren’t offer beauty and charm in their art, gardens, or architecture. And maybe a sense of spirituality. You know. If you’re into that kind of stuff. But while entrance fees are usually under 1,000 yen, going temple-hopping in Kyoto quickly adds up. What’s the cheapo way of temple-hopping in Kyoto? Go shrine-hopping instead!

In Japan, there are two main religions: the native Shinto religion, and the introduced Buddhism. When someone refers to a “temple”, they’re most likely referring to a Buddhist temple. These are often indicated on maps with a manji symbol (卍), which has caused more than a few raised eyebrows given its similarity to a Nazi swastika (they’re totally unrelated). Shrines, on the other hand, are almost always Shinto places of worship. They can be identified by the torii gate at the entrance, and are usually represented with a symbol of a torii gate (⛩) on a map.

Let’s look at the entrance fees to some of the most famous temples and shrines in Kyoto:

Can you see a pattern forming?

We at Japan Cheapo have been unable to find out why the Shinto shrines in Kyoto have no entrance fees, when many Buddhist temples do. Both the temples and shrines need income for upkeep of the grounds, so an entrance fee is understandable. One idea offered was that Shinto shrines receive a big influx of revenue during the New Year period, and that covers their expenses.

Do you know why Shinto shrines don’t require an entrance fee? Comment below!

However, it’s worth noting that Shinto shrines aren’t free to enter throughout Japan. Two notable examples are Toshogu Shrine in Nikko (the resting place of Tokugawa Ieyasu), and Miyajima Shrine near Hiroshima (famous for its torii gate that appears to float on water). On the other hand, Senso-ji in Asakusa is a thriving Buddhist temple—and completely free to enter. This quirk of entrance fees seems to be in Kyoto alone.

Exceptions to the Rules

While “Shrines = Free, Temples = Paid” is a good general rule to follow when being a cheapo tourist in Kyoto, there are always exceptions. For example:

So if you’re visiting Kyoto on the cheap, it’s worth considering the native Shinto shrines as your primary sightseeing destinations. This is particularly true for those that have already travelled across Asia and had their fill of Buddhist temples. Keep in mind that there are also hundreds of small, neighbourhood temples and shrines that aren’t famous at all, and have no admission fee. Walking around Kyoto and finding a small, charming local temple may be the loveliest way to be a cheapo temple hopper.

Kyoto
Written by: Kyoto Boken
Filed under: Things to Do
Tags:
Sharing