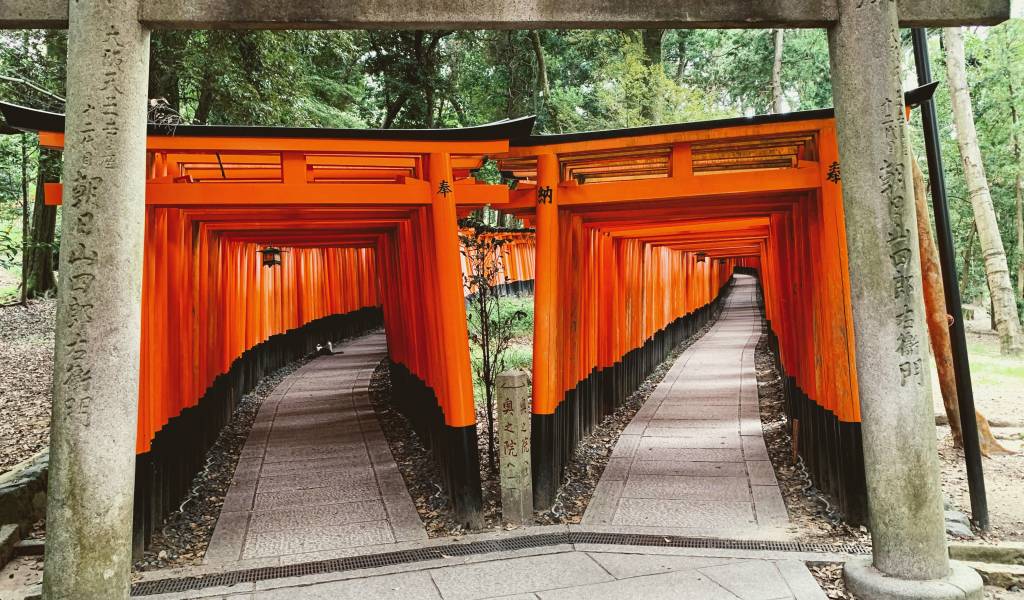 Fushimi Inari Shrine: What Makes it Japan's No. 1 Attraction?

Anyone who goes to Kyoto these days knows about Fushimi Inari-taisha Shrine, and if you don’t, this video guide and report will give you most of the information you’ll need.

Fushimi Inari Shrine has been listed as one of the top attractions for foreign tourists visiting Japan and was no.1 in 2013. Wondering what made this place so special, I pedalled out there by rental bicycle from Kyoto Station. The ride was spectacular following a river then passing through some local Kyoto neighborhoods. At the shrine, I got a chance to speak with one of the head priests and get all those answers I was looking for.

What’s with all these gates?

Fushimi Inari Shrine is famous for it’s 10,000 gates but really there are over 32,000 gates and sub-gates called torii in Japanese.

One could even say it’s a gateway to more gates! You walk through one and there’s another. When you thought you walked through them all, there are more and you could go one forever in a circle if you take a wrong turn at the top.

These gates were all paid for and donated by national and local businesses, sometimes even individuals. If you’d like to donate a gate, prices start at 400,000 yen for a small one and top off at 1,300,000 yen for the extra large ones. There’s no better way to show your appreciation for the marvels of Fushimi Inari and perhaps even impress the God of rice and fortune! Your name will be etched in black on one side and stand forever along the path, hopefully not near the restrooms.

For cheapos, you can donate extra small gates to be laid around the sub-shrines. Although they’re not planted in the ground as part of the gate tunnel, prices start at a reasonable 2500 yen!

Are those gates orange or red?

They’re red-ish. According to the priest at the shrine, the color represents the sun.
Japanese call it “shuiro” and it’s close to the color vermillion in English.
See, it’s this color for a reason!

What’s the reason for the existence of this shrine?

This is where the historical part of the article begins. The shrine was founded in 717 and moved here in 816. It was a popular shrine back in the Heian period between 794 and 1185.

The main structure standing today was built in 1499. Basically, it’s all ancient. The shrine is dedicated to the god of grains – that’s what “Inari” means – the god of abundant crops. This is very closely related to business as having good crops was a sign of having a good income, so Inari became associated with success in business.

I guess you can say success in business in Japan is related to nature and the sun. This is also why you’ll see statues of the fox around the shrine. “Kitsune” or the fox is a servant to the god Inari and a symbol of business. They’re also cunning tricksters, clever minded animals who make perfect guides for the treacherous business world. Wouldn’t you also want the foxes on your side?

Who cleans all those gates?

Find out the answer in my video guide here:

What makes this shrine No. 1?

It could be because this shrine was featured in the Hollywood movie Memoirs of a Geisha, but when I asked a lot of the other foreign tourists, they said they came because it was free!

That’s right – you have to pay to get into almost every Shrine in Kyoto but this one has no charge. This is because all the gates have been donated by a large number of companies, organizations and people. There are loads of them on pilgrimages here or just to pray, so the shrine does not feel charging to visit is proper.

It also helps that this shrine is an adventure in itself. It goes up the side of a mountain and it can take up to 3 hours to climb it all. Along the way, you’ll see numerous sub shrines and stations where you can take a break, even grabbing a cold drink at one of the vending machines on the hillside!

When is the best time to go?

The shrine officially opens at 09:00 and closes at 17:00 but it’s technically open 24 hours. The best times to go are early morning and evening. This is when the tourist buses aren’t there and you can be at peace with nature as you climb up the mountain.

If you don’t mind getting hit in the head by a selfie stick, come between 11:00 and 16:00, the peak time for bus tours. Photo bombing other tourists can be fun, too.

After sunset, the shrine seems deserted! I hiked up in the middle of the night and found that I was alone most of the time. It was extremely peaceful, a moment of zen I suppose. When I did encounter others, it was usually a romantic couple walking hand-in-hand, high school kids in groups or other tourists who couldn’t find their way off the mountain. (I may be kidding about this last one. The mountain is well marked although poorly lit.)

Within the tunnels of gates it can get eerily dark – even a little spooky. Often, I heard movement in the underbrush outside the tunnel of gates. Ghosts? Goblins? … nope. Cats.

The shrine has thousands of strays living in the woods. I can’t be sure all the sounds came from cats though. If you do decide to do some night hiking, bring a flashlight and spare batteries just in case. Dress warm in the fall or spring because it can get a little chilly on top.

How do I get there?

JR West
Take the JR Nara Line from Kyoto Station for 2 stops / 140 yen. It takes about 5 minutes although there are not many trains leaving per hour. The last train back to Kyoto Station is also early so plan ahead.

Keihan Railway
Keihan Fushimi Inari Station is about a 5 minute walk to the shrine. The private Keihan Line is convenient is you are traveling from Kiyomizudera or Gion. From JR Kyoto Station, you;ll have to change trains so it’s best to stick to either JR or Keihan.

The two stations are about 5 minutes apart at the shrine and note which one you’re taking so you don’t end up in the wrong area going back.

There are bicycle rental places by Kyoto station and it takes about 20 minutes to ride there. Rental shops provide you with a map and the course is not very difficult. You can basically follow the river the whole way.

CTP (Kyoto Cycling Tour Project) Bicycle Rental has some great city bikes starting from 1000yen/day. It might be worth upgrading to a mountain bicycle if you intend of riding the paths in the hills in Kyoto. Enquire on the riding courses or take one of their guided bicycle tours. You can reserve online.

Yes, you can walk it to Fushimi Inari. This is definitely the cheapest option but remember that you’ll also be walking a lot at the shrine. It will take you about 45 minutes to an hour from Kyoto Station. It’s fastest to depart from the back side of the station. Make sure you have good shoes for several hours on your feet. Also, there are loads of convenient stores and vending machines along the way.