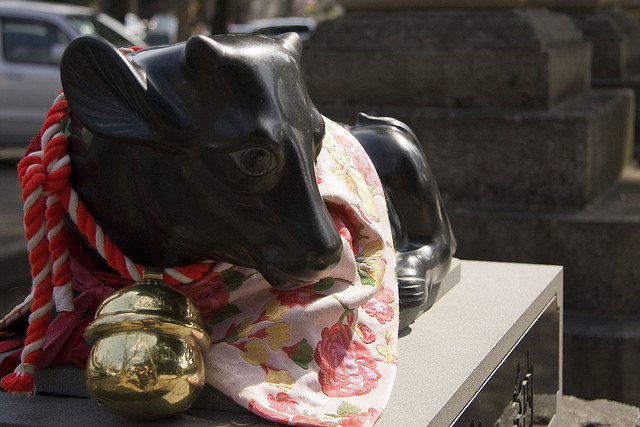 On the edge of the oldest geisha district in Kyoto—Kamishichiken—lies Kitano Tenmangu Shrine dedicated to the god of learning as well as the scholar and politician Sugawara Michizane. During the exam periods many students flock to the shrines dedicated to Michizane to pray for good exam scores by rubbing the statues of lucky cows. It is said that if one rubs the cow’s head or horns one’s brain is vitalized while touching the body on the same bodily location of an ailment you may have it will be cured.

The shrine dates back to around 947, but over the centuries several additional buildings have been built within the precinct which have come to house both national treasures and important cultural properties. During your visit you could also take a look in the shrine’s treasure house for a minor fee of 30 yen to admire some of the precious treasures that have been offered to the shrine over the centuries. Among them are a scroll depicting and describing the origin of Kitano Tenjin, the sub-belief the shrine embraces, as well as a beautiful gold dust sprinkled lacquer desk with ink case.

What makes the buildings at Kitano Tenmangu in themselves so unique is the way their roofs intertwine into a large roof using the construction technique called “yatsumune-zukuri”, or multi-building construction. The buildings have also been fitted with highly detailed golden decorations and vivid colors according to the style fitting the Momoyama period (1573 AD – 1603 AD) during which the current shrine was build.

During spring Kitano Tenmangu attracts a different kind of visitors, those who come to watch the blossoming of the ume (plum) trees. After hanami (cherry blossom tree viewing), viewing the blossoms of the plum trees is one of the most popular events in Japan during the season. Michizana truly adored plum trees and they are found throughout the precinct turning Kitano Tenmangu in one of the most beautiful plum blossom viewing sites in Kyoto. In fact, on the 25th of February a special tea ceremony is organized during which the shrine’s Bai-en, ume garden, is opened to the public. While you enjoy the blossom geiko and maiko of the geisha district serve some of the finest matcha with sweets. In autumn Kitano Tenmangu’s 250 maple trees engulf the shrine in a spectacle of bright red color as their leaves change. Additionally, as I covered in one of my previous articles Kitano Tenmangu organizes one of Kyoto’s largest flea markets on the 25th of each month which is a great opportunity to visit the shrine and enjoy a quite unique activity in Kyoto.

This would be vegetarian heaven in Kyoto, although Tofu Café Fujino—which has two more smaller establishments in the city—offers an amazingly delicious lunch for everyone and anyone, dietary restrictions without reference. Fujino offers a wide variety of season-based tofu dishes for you to try as small separate dishes or get a great deal by ordering a set meal compromising of six to eight different ways of preparing soy-based products, such as tofu and milk. It truly shows the sheer versatility of these ingredients to make simple yet very delicious tasting and, being quite a heavy meal, very fulfilling. Lunch prices for the set dishes range from 750 yen (on weekends and the 25th of each month) to about 1.200 yen. Fujino is definitely the place to have lunch after finishing your bargain hunt at Kitano Tenmangu’s flea market. The café also has a small shop with various souvenirs and of course soy-based products, which even includes confectionary.

Kyoto’s city buses 50 and 101 stop at “Kitano Tenmangu Mae”, which is right in front of the main gate. The shrine opens to the public freely after 5:00 until 18:00 from April to October and closing half an hour earlier from November to March. Tofu Café Fujino is located about hundred meter to the right when exiting Kitano Tenmangu towards Kitanohakubaicho Station. The lunch area is open between 11:00 and 15:00 while the shop opens earlier at 10:00 until late in the afternoon at 18:00.

Written by: Bjorn
Filed under: Food and Drink | Things to Do
Tags:
Sharing