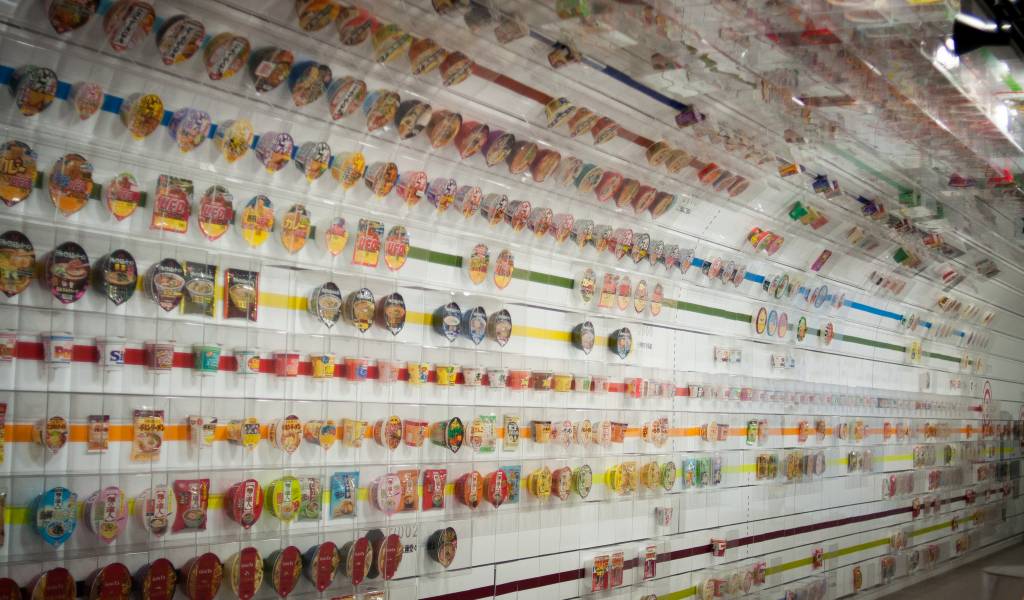 The Man Behind the Ramen

Momofuku Ando is worthy of god status. The late Taiwanese-Japanese inventor of instant ramen changed the shape of food for the Japanese and poor students around the world forever! So revolutionary was his work, that the (regular) Ramen Museum in Shin-Yokohama features a 1:1 replica of a typical Japanese city street in 1958—the year Ando invented instant ramen. He is also immortalized in the name of David Chang’s Momofuku restaurant chain, in a Google Doodle celebrating his 105th birthday, and in not one, but two instant ramen museums in Japan. You can read about the Yokohama CupNoodle Museum on our sister site, Tokyo Cheapo, but in this article, we’ll be exploring the Momofuku Ando Instant Ramen Museum in Ikeda, Osaka.

Today, Ikeda is a rather up-market city in Osaka prefecture with large, walled-off houses and art galleries dotting the landscape. It’s hard to believe that it is the birthplace of one of the cheapest foodstuffs available today. But it was in a shed at the back of Momofuku Ando’s house in Ikeda where he spent months experimenting and perfecting a new food that could meet the growing population’s appetite. Ando spent the rest of his life in Ikeda, and it is here where the Momofuku Ando Instant Ramen Museum was established. It’s an ideal shrine to that cheapo food, especially as entry is free!

Instant Ramen Museum: Past and Present

The first part of the museum is dedicated to the process Ando and his team at Nissin Foods followed to create instant ramen. Ando’s creativity, thought process and determination was truly admirable, and worthy of the success that instant ramen has today. The museum even has a scale replica of the shed where Ando worked to create his invention. This section of the museum also looks at the history of instant ramen since its commercial release—including the portable and convenient Cup Noodle variation, the dozens of different flavors, and even the space ramen invented for Japanese astronauts living on the International Space Station. There is a rather impressive display of the (still growing) list of instant ramen varieties, and a comically large Cup Noodle container showing a cross-section of its contents. A very well-produced animated video shows how Cup Noodles are manufactured at scale today. Even if you don’t really consider instant ramen as a feast for your mouth, this museum is certainly a feast for the eyes.

The other parts of the museum involve some cost. On the second floor, it is possible to take part in a workshop to create instant chicken ramen noodles from scratch. That’s right—create a dough, roll it out, cut it into noodles and flash-fry them in a shape that will fit into a Cup Noodle container! The workshops need to be booked in advance, take about 90 minutes, and cost 500 yen for adults and 300 yen for children.

But perhaps the most popular area of the museum is the My Cup Noodle Factory, where for 300 yen, visitors can customize their own Cup Noodle packet to take home and eat. The 300 yen gets you a flavor-free container of Cup Noodle. Choose a soup flavor and up to four toppings for your very own version of Cup Noodle. Tables with color markers are available to decorate your container and make it even more personalized. Then, it’s off to the “factory” where staff in impeccable uniforms will fill your container with the soup flavoring and toppings before sealing and shrink-wrapping your unique Cup Noodle! Finally, pack it into a cute inflatable bag that’ll protect your creation for the rest of the day. While 300 yen is more expensive than the 100 yen normally paid for a regular packet of Cup Noodle, making your own customized version is highly satisfying, fun and certainly worth the small cost.

Perhaps the biggest let-down in this museum is the lack of English signage. The staff usually speak basic English, and the instructions for customizing your own Cup Noodle cup are offered on an English print-out. But it’s not possible to completely appreciate Ando’s work and instant ramen’s history without any Japanese ability. The ramen-making workshop is also only conducted in Japanese, although the staff try to be helpful and it’s generally possible to follow along by watching other participants. The number of foreign visitors seems to be growing though, so perhaps the language situation will change in the future.

Either way, the museum is quite small and unless you are taking a workshop, you will likely be finished in under an hour. Which is probably just as well, because looking at all the instant noodles there is bound to make you hungry. So now it’s time to head home and enjoy your custom Cup Noodles.