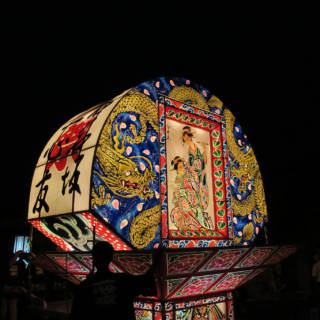 Kuroishi, a town on the central Tsugaru Plain of Aomori Prefecture holds its own Nebuta festival (called Neputa in these parts) on July 30th and August 5th each year.

The parade features more than 50 floats, most in the shape popular in the neighboring Hirosaki Neputa with a small number of the free-form Aomori Nebuta-style floats also taking part. The floats gather togethe ron the 30th and the 2nd, so these are the best days to visit. On other days they move around the town and ceremonies are held.

Even though the festival is smaller than the Hirosaki and Aomori City processions, there is a history of Neputa in the area from the Edo period with the official city event beginning in 1955.