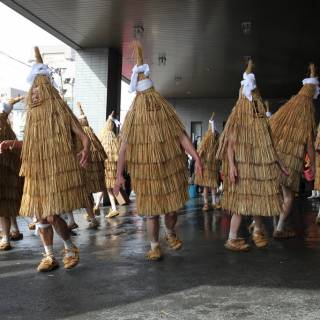 This unique festival (かせ鳥 in Japanese) gets its name from straw coats worn by the participants. Apparently they’re supposed to be birds. While dancing, they cry out “kaah, kaah” – because they’re birds of course.

Originating in the 1600s, the festival begins in front Kaminoyama Castle. While dancing, participants are showered with freezing cold water – which often turns to ice in the freezing temperatures. The dancers gradually move into the city where the water throwing continues and the sake consumption begins.

It’s believed that the festival brings prosperity. The night time celebrations supposedly have some connection to the mizushobai – the adult entertainment business, although this connection may be more historical than current.