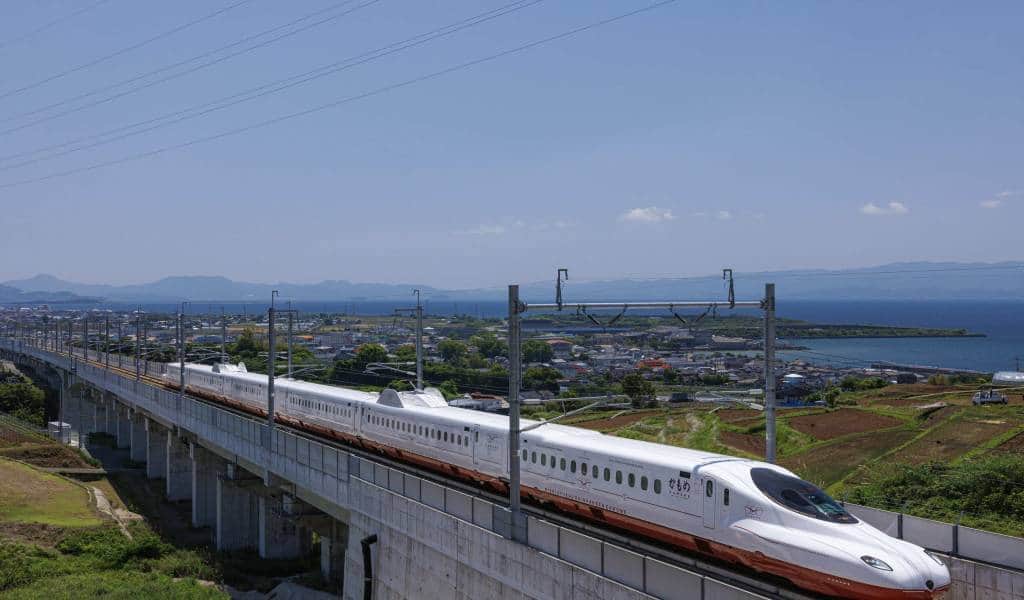 A Complete Guide to the West Kyūshū Shinkansen

Business is booming in Nagasaki as the newest bullet train line, the West Kyūshū Shinkansen, opens on September 23, 2022.

Also known as the Nishi-Kyūshū Shinkansen, the train heralds the start of a beautiful friendship between Fukuoka (Hakata Station) and Nagasaki by shaving off 30 minutes from the current 2-hour journey. However, the line’s construction hasn’t been without the nail-biting drama of train politics.

Overview of the West Kyūshū Shinkansen

This bullet train line stops at only five stations between Takeo Onsen Station and Nagasaki Station, taking under 25 minutes. This has led people to call it “Japan’s shortest Shinkansen”. However, its dissapointing length isn’t by design.

When it was originally conceived, the Shinkansen track was intended to start in Fukuoka and finish in Nagasaki, but because of the opposition of Saga Prefecture (the land in the middle) this was impossible. Saga deemed the line too expensive with limited benefits. Currently, there is still a push to get them on board.

Note: The West Kyūshū Shinkansen does not directly link to any other Shinkansen line, thus earning the nickname “the unconnected Shinkansen”. You must take a limited express train service from Takeo Onsen to Hakata before you reach the main Kyūshū Shinkansen. Luckily, it’s only a cross-platform change at Takeo Onsen.

Highlights along the West Kyūshū Shinkansen

There’s a lot packed into this short journey:

Tip: Once you get to Nagasaki, why not jump on a boat tour to Battleship Island.

Services on the West Kyūshū Shinkansen

The only service that is currently available is the Kamome service from Takeo Onsen to Nagasaki which takes only 23 minutes. Every train stops at Takeo Onsen, Isahaya, and Nagasaki, and most stop at all five stations. See below for more information.

Note: Do not confuse this with the Relay Kamome Limited Express which links Hakata to Takeo Onsen.

What type of train is it?

The swanky sightseeing train Futatsuboshi 4047 will also open at the same time as the Shinkansen and run between Nagasaki and Takeo Onsen. Although, it will only be available at limited times.

How to buy tickets

A Shinkansen ticket from Takeo Onsen to Nagasaki costs ¥3,600, but a more popular ticket route is from Hakata (Fukuoka) Station to Nagasaki Station with a transfer at Takeo Onsen (costing ¥6,050).

You can always buy tickets for the West Kyūshū Shinkansen at any JR ticket window, but you can also save some trouble — and money — by buying online using these websites:

Note: There is an English-language website for Eki-net, but it tends to miss out on the discounts offered by the Japanese-language site.

In celebration of the opening of the line, there are some discounted one-way tickets available for a limited time if you use the online JR Kyūshū Reservation Service.

Note: These discounts are not available if you book in person. All tickets include a reserved seat on the Relay Kamome Limited Express and West Kyūshū Shinkansen.

Getting discount tickets through Eki-net

Eki-net is a useful website for getting cheap, discounted tickets in advance. It is the chosen website for many on-the-go travelers because of its ticketless option (if you have an IC train card). The only problem is that everything is in Japanese. To make things easier, you can always use a translator browser extension.

Of course the JR Nationwide Rail Pass covers this route, but there are also JR Kyūshū Regional Rail Passes and other JR West Passes.

What rail passes are good for the West Kyūshū Shinkansen?

Thanks to the newly built Shinkansen line, all five stations on the line have been gentrified with swanky new train terminals, giving us a peak in to the rural life of West Kyūshū.

Takeo Onsen has more than 1,000 years of experience in the hot spring business, with some facilities having been constructed in 1877. It is also known for having water that helps to ease joint pain, cure fatigue, and soften the skin.

10 minutes on foot from the station, you will be welcomed into town by the Rōmon Gate, deemed a Tangible Cultural Property by the Japanese government. A 15-minute walk from the station is Takeo Shrine, which has an impressive 3,000-year-old camphor tree. A little farther afield (30 minutes from the station) is Mifuneyama Rakuen. This garden is beautiful throughout the year, but is especially famous for its cherry blossoms and autumn leaves.

Tip: Until November 2022, TeamLab has a special art exhibition in Mifuneyama Rakuen. Get tickets here.

Inside the station there is a bookstore, café — serving local green tea — and tourist center where you can rent bikes and buy souvenirs. They also offer a luggage drop-off service.

Where can I go from Takeo Onsen?

Takeo Onsen not only has transport links to Nagasaki City, but also to the Holland-inspired theme-park Huis Ten Bosch, and other islands to the west of Kyūshū – such as the Goto Islands — through Sasebo. There is also direct access to Fukuoka.

Another quaint town known for its hot springs, Ureshino Onsen boasts around 50 onsen facilities. The water is not only good for the skin, but they also use it to make a special tofu hot pot dish called yudofu. There has been a long history of tea cultivation in the area and so Ureshino tea is a must-drink when visiting. 15 minutes from the station is Todoroki Falls, where you can see waterfalls surrounded by cherry blossom trees.

The renovated station has onsen foot baths and a sprawling green space in front.

Where can I go from Ureshino Onsen?

With the opening of the Shinkansen, Ureshino Onsen also received a bus service. This makes it easier to access the surrounding rural areas.

Shin-Ōmura is a newly built station that services both the Shinkansen and Ōmura Line. It is part of Ōmura City, which is most known for Ōmura Park. This park is famous for being built on the Kashima Castle ruins and for its abundance of flowers; the city even has its own variation of cherry blossom — the Ōmurazakura. To get to the park you’ll need to hop on a bus or train to nearby Ōmura Station and walk from there.

There are no reserved seat ticket machines at this station. This station also connects to the Ōmura Line station, which is unmanned.

Where can I go from Shin-Ōmura?

As with Takeo Onsen, you can also use Shin-Ōmura to explore Nagasaki. The main tourist spot is Huis Ten Bosch via the Ōmura Line.

Isahaya is known for being a large transport hub. Its most prominent landmarks are 15 minutes from the station where you can see Isahaya Park and the stone Megane (glasses) Bridge, which gets its name from the reflection it makes in the river below. If you want to see something closer to the station, there is Isahaya Shrine which is only a 5-minute walk away.

It is the second busiest station in Nagasaki Prefecture, after Nagasaki Station. This makes it quite a large station and is the last stop on the Ōmura Line and the first stop on the Shimabara Railway. Most trains stop at this station.

Where can I go from Isahaya?

Isahaya is a great place to connect to hard-to-get places in the south-east of Nagasaki such as Unzen Onsen and Shimabara via the Shimabara Railway (be careful, this is not a JR line).

Nagasaki Station is the final destination for most holiday goers. It’s steeped in history and beauty with plenty of things to do. There’s Glover Garden, an impressive Western-style house that offers a picturesque view of Nagasaki Harbor; Mount Inasa, made for romantic nighttime dates; Nagasaki Peace Park and Atomic Bomb Museum; and much more.

Tip: The best way to learn about the history of Nagasaki is with a private walking tour.

Nagasaki is the busiest station in Nagasaki Prefecture. It has many restaurants, coin lockers, and plenty of tourist information. The station has several train lines and also connects to the tramway.

Where can I go from Nagasaki?

Luckily for you, Nagasaki City has plenty of trains, boats, and busses to get you almost anywhere you need to go. We recommend going to the abandoned Hashima Island on a boat tour or going directly to the Goto Islands.

Explore more of Kyushu with our comprehensive guide. Why not feast on ramen in Fukuoka, feel like royalty in Kumamoto Castle, or try volcanic ash ice-cream in Kagoshima.