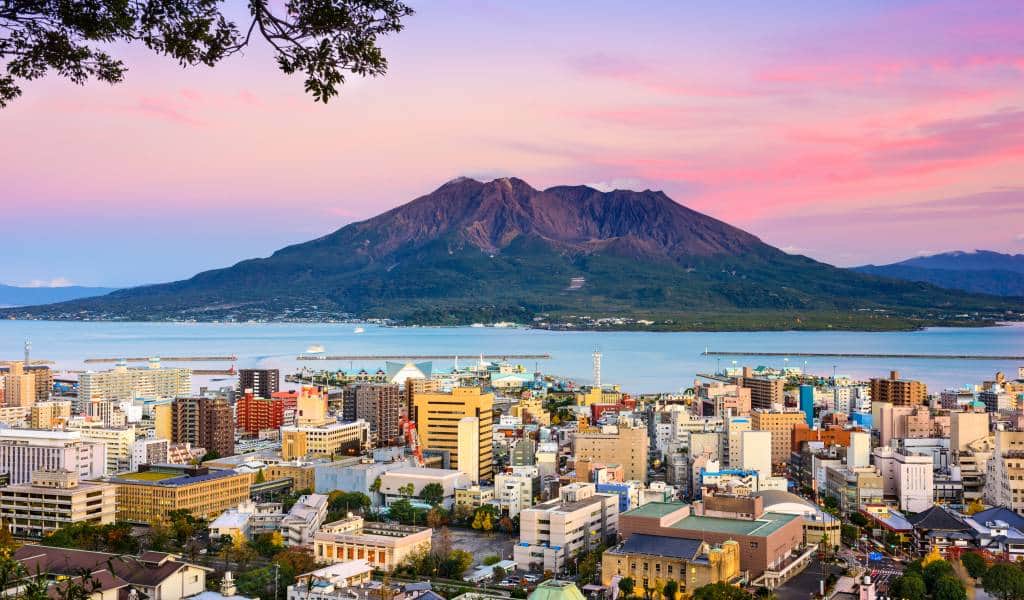 In terms of Japan’s four main islands, Kagoshima is as south as you can go and includes several island chains. As you might’ve guessed from its location, it’s got a lot going for it from hot springs to seafood. Formerly the Satsuma Domain, it had a central role in the Meiji Restoration. But its history of propelling Japan’s modernization is matched with equally impressive historical and cultural attractions. There are also lots of local specialties to enjoy like shirokuma shaved ice and black vinegar (kurozu), made in jars they set outside. People in Kagoshima love their shochu liquor and drink it in a variety of ways. Imojochu (made from Satsuma-imo sweet potatoes) and Kokuto Shochu (made from brown sugar) are two special types to try.

International flights to Kagoshima come from Korea, Shanghai, Taiwan, and Hong Kong. Within Japan, regular flights go between Tokyo, Osaka, Nagoya, and Fukuoka. From Tokyo the flight is under 2 hours. It is also possible to get to its isolated islands by plane from the domestic airport, and even from Tokyo or Osaka in the case of certain islands.

By train, you can get to Kagoshima from Tokyo or Kyoto with a transfer at Shin-Osaka or Hakata Station. From either station, you can go directly to Kagoshima’s central station on the Kyushu Shinkansen. The ride from Tokyo takes about seven hours and costs upwards of 30,000 yen—so if you can, grab a JR Pass to make it more worthwhile.

Highway buses from as far as Osaka can take you to Kagoshima, but if a 10-plus hour bus ride sounds like it will drive you insane, the ones within Kyushu take only about 3-6 hours.

Rental car services can be found surrounding the airport, and the scenery makes an extra good case for the road trip option.

Kagoshima is served by many of JR Kyushu’s including the Nippo Line and Kagoshima Line. And train lovers, you can enjoy some of the nicest train rides getting around Kagoshima. The Hayato-no-Kaze Express, Ibusuki no Tamatebako, Seven Stars, and Orange Restaurant are examples of a high-quality train experience.

As a prefecture made up of multiple islands, planes and ferry services can take you to many of the ports within and outside Kagoshima. Shuttle buses can take you from Kagoshima Chuo Station to the various ferry ports. There are also sightseeing buses like City View Buses, which pass by major tourist sites and ferry terminals.

Aside from the 2,000-something onsen, Kagoshima’s bathing highlight is the natural steam sand bath in Ibusuki, a one-of-a-kind experience as you can’t find them anywhere else in the world.

In terms of which of its smaller islands you should visit, the Amami Islands are at the top, as they’re famous for unique attractions and local culture. Go diving in the coral reefs, hike through the Kinsakubaru Virgin Forest, and walk on the white sands of Yurigahama Beach to look for star-shaped grains of sand that are rarer than anything you can catch on Pokemon Go. And if you’re a fan of Hayao Miyazaki, then the must-see is the island of Yakushima, which inspired the forests of “Princess Mononoke”. While it makes for a great nature hike, bring your raincoat, as there is usually at least some rainfall on this subtropic island everyday.

People call Kirishima Grand Shrine the “the land where gods once descended”. A famous power spot good for “family safety” and “career prosperity”, visitors can also see a sacred tree which people say is the ancestor of all of southern Kyushu’s pine trees. And if you want a really unique shrine experience, visit Kamafuta Shrine, where visitors balance rice lids on their heads to pray.

All Articles about Kagoshima

Things To Do in Kagoshima

Getting Around in Kagoshima