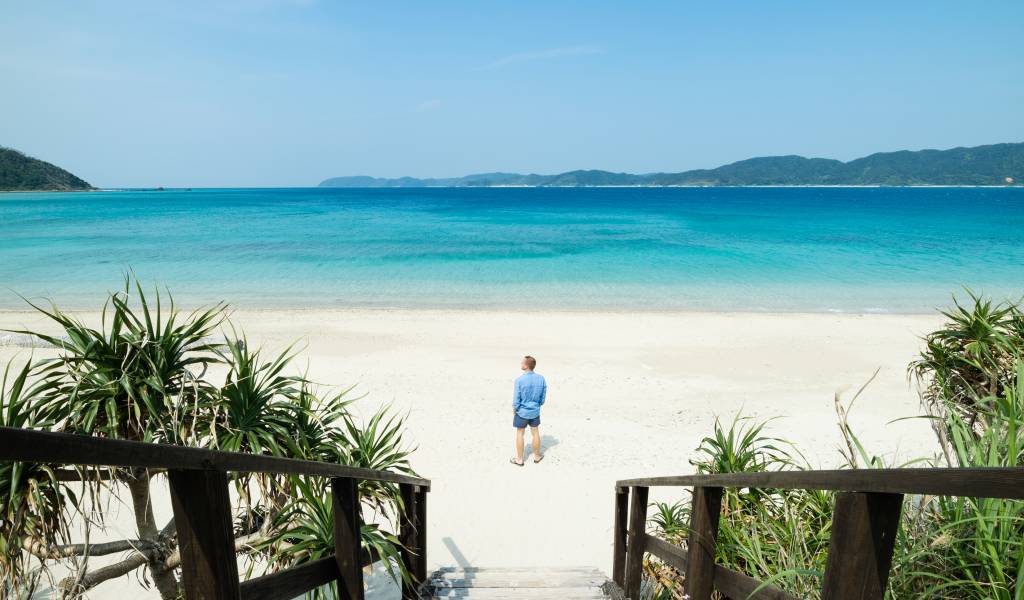 Japan is a country made of islands, and that means there are plenty of beaches with golden sands and crystal-blue seas for you to explore. While sand, surf and sun are the ideal combination, Japan likes to add a few more options to your beach days—so take your pick from onsen, sand slopes and even views of Fuji while you sunbathe!

Not everyone has the time or money to jet off to the lovely tropical destinations Japan has to offer (if you do, skip down a little). However, there are plenty of mainland options which will keep you more than happy. If you want to stay close to Tokyo, there are some easily accessible options. For those looking to travel farther afield, read on.

Forget the sea, people come to Ibusuki for the sand—and it isn’t the golden stretches you’re imagining either. Here, the sand is heated from below by natural hot springs, so being buried up to the neck is a unique way to enjoy its relaxing and detoxifying properties.

A sand bath costs around ¥1,000 and you will be covered by staff and checked on in case you want more weight/heat, or to finish after around 10–15 minutes.

Access: Within walking distance of Ibusuki Station which is 75 minutes from Kagoshima-Chuo on the JR Ibusuki Makurazaki Line and costs ¥1,110 each way.

Particularly beautiful thanks to its unusual rock formations, Jodogahama Beach on the Sanriku Coast is by far one of the best to see in Japan. Jodogahama means “Pure Land Beach” and was named by Buddhist monk Reiko who compared it to a paradise.

The water is incredibly clear and perfect for swimming thanks to gentle waves. It is a pebble beach rather than a sand one, but that’s a small price to pay. You can take small boat cruises to see the rock formations and caves up close too.

Access: Catch a bus from Miyako Station and get off at Jodogahama Visitor Center which is a 15-minute walk from the beach. (Some buses continue all the way to beach). There are two local buses every hour and additional shuttle buses in the peak season. It takes 15 minutes and costs ¥220).

This is not a “resort” as such, but rather a beach that happens to have a sand slope worth sledding down, as well as lovely views. The surrounding beach area is ripe for exploring, with rock formations and shallow waters just waiting to be paddled in. You can rent sledges for a few hundred yen and explore the nearby open cave, Ryugukutsu.

The Izu coast has plenty of stunning beaches with incredibly clear water, so be sure to explore some other options. Try Shirahama Ohama, Nabetahama, Iritahama, Kisami Ohama and Sotoura beaches for the traditional beach scene.

Access: Catch a bus from Izukyu Shimoda Station (on the JR Izukyu or Odoriko lines) for just under 20 minutes for ¥440.

Another giveaway name, this beach is an 8 km sandy stretch popular for being a >car-friendly beach for those select few who like looking at the sea from a moving vehicle. Although you can sit up on the higher levels of the beach, you can’t really frolick with abandon in case you’re hit by a slow-moving sightseer.

Access: If driving, leave the Noto Satoyama Kaido expressway at either the Chirihama or Imahama exits. If not driving, maybe don’t bother.

If views of the sea aren’t enough for you, how about admiring Fuji next time you sunbathe? At Miho Beach in Shizuoka, not only can you catch the rays, you can catch sight of the country’s most famous landmark too. So it’s a bit pebbly, and is more of a stroll than your run-of-the-mill place, but still, it’s a beach. At Miho no Matsubara, you can explore the pine forests spread out across 7 km of seashore.

Access: You can catch a bus from Shimizu Station and get off close to Miho Shrine (the Sekaiisan Miho-no-Matsubara Kaminomichi Iriguchi stop). From there, you can walk to the coastline. Alternatively, catch a ferry from Hinode Pier to the swimming beaches further up the coastline.

With a name like “white beach”, you know what you can expect sand-wise with Shirahama, and get a feeling for how popular it might be too. Surrounded by onsen resort hotels, the beach is picture-perfect otherwise, with a eyecatching curve to its sandy shore. Nightly fireworks are held here during summer and the beach is perfect for swimming and sunbathing.

The beach happens to be in one of the three oldest hot spring areas in Japan. You can even soak in an onsen on the beach at Shirasuna Onsen (swimsuits mandatory).

Be careful not to confuse this beach with the Shirahama Beach in Shizuoka!

Access: Head to Shirahama Station on the Kisei or Kuroshio lines and then catch one of the many buses headed to Shirahama Bus Station (about 20 minutes, just under ¥500) which is right by the beach.

For more than just a day trip, consider some of Japan’s beach destinations for a getaway. Since they are all island-based, flights and ferries do boost the price a little, but stick to budget airlines and avoid peak seasons and you can make it happen.

On the way to Okinawa, but still claimed by Kagoshima, the island of Amami Oshima is the lesser-visited beach haven that should be top of your list. As the largest of the Satsunan Islands, it has mangroves, a history of kimono-making, local delicacies, and, of course, amazing beaches.

The golden sand beaches are simple affairs with few amenities, if any, and are not all are accessible by local public transport. The most popular is Tomori Beach, which is close to the airport. It’s great for snorkeling and sunbathing, with views across a shallow expanse of water and coral reefs. Ohama Beach is just outside Amami city so is easily accessed. Spots like Heart Rock and Kurasaki Beach are beautiful, but require a car. Make a day trip to the nearby islands of Kakeromajima, Yoroshima, Ukejima and Kikai for even more secluded spots.

Flights to Amami Oshima run from Tokyo, Osaka, Fukuoka, Naha and Kagoshima. The budget airline Vanilla Air can be used between Osaka and Tokyo and is cheaper than JAL, which runs the other routes.

You can also access the island by ferry from Kagoshima taking around 11 hours. A one-way fare starts at around ¥10,060 and goes up from there. Two companies operate on the route, Marix and A Line—with services available every few days.

The go-to beach destination in Japan, Okinawa is synonymous with turquoise seas, white sandy beaches and snorkeling. The main island (Okinawa) has some good beach options, but it’s busier and generally not as relaxing. Your best bet is heading to one of the smaller Kerama Islands. Tokashiki and Zamami are closest, with some stunning options and cheap hostels to boot.

Some of the hotels on the island are part of hotel complexes, which isn’t exactly the beach vibe most people are looking for, but Zampa, Manza, Sun Marina and Mibaru beaches are available to all. For diving, head to Cape Maeda, which has some good sea life and a cave you can swim to!

Furuzamami Beach is probably the most famous in the Kerama Islands, and has been deemed a two-star destination in the Michelin Green Guide. It’s got sand, coral reefs for snorkeling and some amenities so you can easily spend a day relaxing.

Elsewhere on the island, Ama Beach is a great spot to see turtles and has the island’s only campsite nearby, while Touma is more secluded. Both are sandy rather than coral based, so they’re better for relaxing than snorkeling. The two small island areas of Gahi and Agenashiku are great options too.

The largest island has two stunning main beaches: 1) Aharen which is larger, with restaurants and facilities nearby; and 2) Tokashiku which is a little smaller, but still well equipped. Both beaches have separated swimming and snorkeling sections along the white sand—and you can spot turtles at both!

Ishigaki is the main hub of the Yaeyama Islands: a sub-tropical haven part of Okinawa, but closer to Taiwan by far. Some of the country’s most beautiful beaches can be found here.

Ishigaki‘s Kabira Bay is the most recognized spot and is truly stunning. However, you can’t actually swim there—so it’s more of a viewing area than a day-out spot. There are countless beaches along the main island, with some of the best including:

Tokashiki, Kohama and Kuroshima all have stunning beaches, and while Iriomote is more of a mangrove/kayaking scene, there are some great diving options too! Hateruma is the island farthest from Japan, and has some of the most untouched spots, like Nishihama Beach, which is pretty much heaven on earth.

Slightly farther out but towards Japan, Miyako-jima is home to Yonaha Maehama beach—considered to be the best diving spot in all of Japan. Head to Hatenohama on a day tour if possible, the sand bar is one of the most beautiful stretches by far.

A World Heritage Site, the Ogasawara Archipelago is deep in the Pacific Ocean, over 1,000 miles from Tokyo. With a sub-tropical climate, they offer a unique ecosystem as they were never connected to any other land mass and are therefore carefully protected.

The two main islands, Hahajima (“Mother Island”) and Chichijima (“Father Island”) have hotels and sightseeing opportunities like whale-watching, shipwreck-diving and dolphin-swimming as well as plenty of amazing beaches.

Sakaiura Beach has great snorkeling opportunities with a sunken warship to explore and golden sands to relax on after. Kominato is the islands longest stretch of beach perfect for shallow swimming and sunbathing. The more isolated Hatsuneura Beach is great for snorkeling and swimming, but is only accessible by car and a hike.

The best beaches on this island are found in the southern half, but there are excellent hiking trails and rental bikes available (note: there is no other means of transport). Minamikazi Beach and Miyukinohama are both incredibly clear, with snorkeling and swimming opportunities that might be the best you’ve ever experienced.

Beaches in Japan have more rules than most places, (because regulated fun is the best kind of fun). While some are a little strange, some definitely need to be followed.

Take your trash home is the theme in Japan, and this applies heavily at the beach. Arrive with extra bags, because there will not be any bins.

Beaches here can be open or closed, and while it cannot physically be done, somehow if you go out of season, even by a few days, the place will be dead. You’re still welcome to go and make the most of it, just be aware that it means that lifeguards will not be around. Japan is law-abiding to the bone, so if they’re told it’s closed, it’s closed.

Japan has a lot of jellyfish, and if you’re in areas like Okinawa or Ishigaki, you may want to check which beaches install jellyfish nets—and when, as the more-secluded ones often don’t. They increase towards September.

Many beaches in Japan have strict no swimming rules, like at Kabira Bay. Sometimes it’s due to boat paths, jet skis, dangerous currents and sometimes all three—so if it says don’t swim, then don’t.

Legend has it that during Obon, spirits return to land from the sea, and therefore, many from the older generation will not visit the beach after this national holiday. Younger people are less superstitious though and you can find them at the beach, apparently unafraid that the ghosts of their ancestors will pull them to their watery deaths.

Dive in a little deeper—visit some of these top diving spots in Japan.