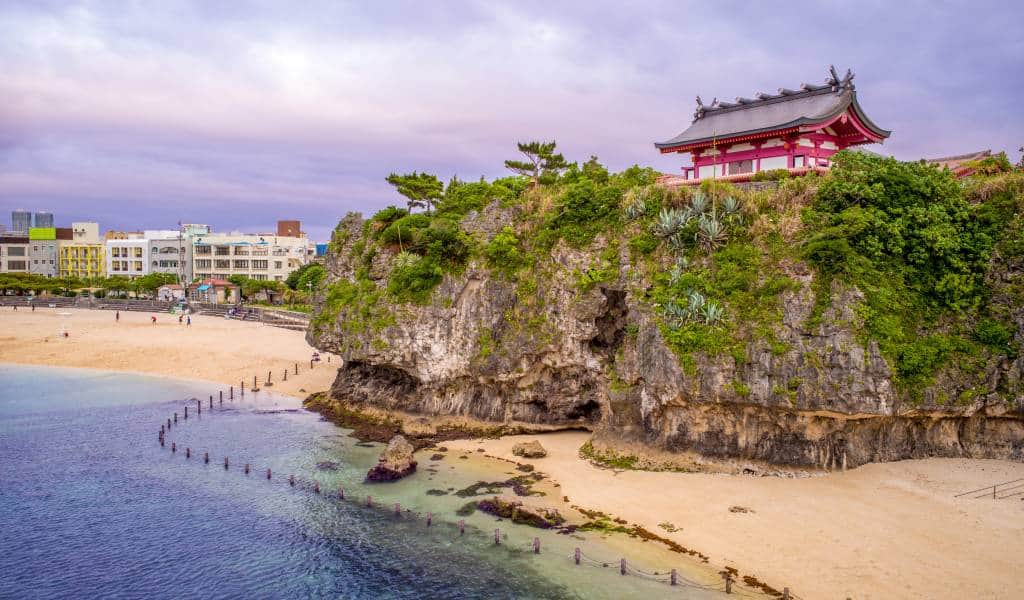 Okinawa: How to Do the Sub-tropical Islands on a Budget

“Traveling to Okinawa is expensive,” a Japanese friend once told me. “If I wanted to go to the beach, I could go to a Southeast Asian country for much cheaper.” Mention Okinawa and there are bound to be some people who think that it’s just too far or too expensive to be worth visiting. It’s simply not true, though, that going to Okinawa is expensive. I was able to visit Okinawa on a budget, and here’s how.

1. Fly with an LCC (ideally during off-peak seasons)

It’s all thanks to low-cost carriers that going to Okinawa isn’t necessarily costly anymore. For example, Vanilla Air flies from Tokyo to Naha, and the average fare is about ¥7,000. I’ve seen prices drop to as low as ¥2,400 due to promo fares and it being off-season, though. If you want to go cheapo all the way, go in January or February, or from October to December.

Meanwhile, Peach Air flies to Naha from Fukuoka and Osaka, with prices starting at about ¥4,500. Peach also flies from Osaka to Ishigaki Island, which is known for its beautiful beaches, for a bit more.

Note that Okinawa is a holiday destination, so some times of the year are a lot busier—and thus more expensive—than others.

2. Stick to the main island (or just one island)

Island-hopping can also get pretty expensive: sometimes, your only option to get from one island to another may be an expensive plane flight because it’s the only way, or a previously existing ferry service was discontinued. For instance, I wanted to go to Ishigaki Island from Naha (the capital of Okinawa), but there were no longer any ferries going back and forth between Ishigaki and Okinawa Island.

I had to go from Naha to Ishigaki by plane, and the round-trip cost was almost the same as my round-trip Tokyo-Naha flight. Had I not availed myself of promo fares, the Naha-Ishigaki round trip would’ve cost more than the Tokyo-Naha round trip.

That may be a bummer, because those are attractions that Okinawa is known for, but even if you just mostly stay within the eponymous main island, you can still appreciate Okinawa. Even if you don’t get to see Okinawa’s beaches or nature much, there’s still a lot to appreciate about Okinawa’s unique culture and traditions.

Things to do in and around Naha, Okinawa

Naha alone already has its own appeal. Its long, bustling shopping street, Kokusai-Dori has a lot of distinctly Okinawan souvenirs and delicacies, such as shisa (a pair of guardian deities that look like lion-dog hybrids) statues and beni-imo (purple yam) snacks.

There are also plenty of shops where you can try some Okinawan handicrafts and take home some souvenirs you made yourself!

Take a few turns here and there, and you can find yourself in Makishi Market, where you can see various pork products being sold, as well as fruits and vegetables that you can’t easily find in the rest of Japan: goya, or bitter gourd; shiquasa, or Okinawan lime; and so on.

Upstairs are some restaurants serving fresh Okinawan food—don’t be put off by how old-school they may look; the food’s delicious! You can even ask some of them to cook raw ingredients bought downstairs.

The majestic Shuri Castle is also definitely worth visiting to see Ryukyuan architecture (Ryukyu being the name of the kingdom that ruled over Okinawa and part of present-day Kagoshima).

If you want to learn about Okinawan culture, go to Okinawa World or Ryukyu Village, which, while touristy, are opportunities for you to see eisa, a lively Okinawan dance; to try some traditional handicraft; and to wear a bingata kimono, which is made of cloth dyed and stenciled Okinawan-style.

Okinawa World even has a massive underground cave, Gyokusendo, that you can walk through to see some stalactites and stalagmites.

Beyond Naha but also on the main island is Churaumi Aquarium, a must-see when you’re in Okinawa. This aquarium, one of the largest in the world, has three whale sharks, which is a feat considering how big these gentle giants are. Entrance is ¥1,880 per person, but some hotels and Klook have slightly discounted tickets, and the price drops to ¥1,310 after 4 pm.

Prefer your fish free-range? Consider booking a marine-life cruise in a glass-bottomed boat.

Okinawa only has one railway system: the Okinawa Monorail, also known as the Yui Rail, and it only covers parts of Naha. Public buses are few and far between. This leads to another reason for tourists to see Okinawa as expensive and not worth visiting: to go to other places, even if they’re also on the main island, you have to rent a car or take a taxi to get around. But a one-day bus tour can save you the trouble.

The tours are not expensive, costing anywhere between ¥3,000 and ¥26,400. There are a variety of options to chose from including group or private tours, the destinations you can visit and the types of activity included. Check out Viator for the full range of available tour packages.

4. Stay at a guesthouse or hostel

This may seem like common-sense advice, but you’ll be surprised at how cheap Okinawa’s guesthouse and hostel rooms can get. Some of them can go as low as ¥1,500 a night, because property isn’t as expensive in Okinawa.

There’s a chance, though, that you just might get what you paid for, so be careful (unless you really don’t mind sacrificing comfort and cleanliness), and do check the reviews.

Even the hotels can be pretty cheap. Feeling hesitant to pay what seemed like a too-good-to-be-true price for accommodation, I opted for a budget hotel. I stayed in Hotel Stork in Omoromachi, near several shopping malls, which cleverly uses loft-style rooms to save space. The hotel had free drinks downstairs, polite and friendly staff, and rooms for a little less than ¥3,000 a night.

While we do our best to ensure it’s correct, information is subject to change. Post first published in March, 2015. Last updated in February, 2020, by Kylie van Zyl.

Written by: Tiffany
Filed under: Things to Do | Travel
Sharing