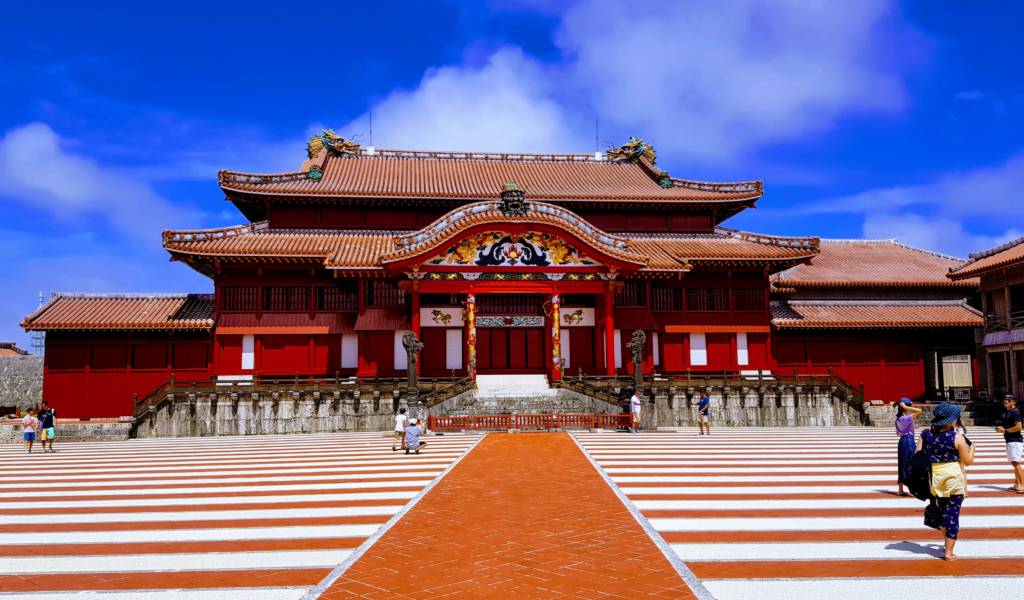 Update: In 2019, a large portion of Shuri Castle burned to the ground in a tragic fire. The magnificent Seiden is currently under the process of reconstruction. However, many structures within the Shuri Castle Park survived the blaze, including the iconic gates, the observation decks, and the visitor centre. Tourists are encouraged to still visit the site, and the sections that remain open.

Also known as Shurijo Castle (jo means ‘castle’), this was the palace of the Ryukyu kings from 1429 until 1879.

A gorgeous piece of architecture, and, prior to the fire in 2019, the largest wooden structure in Okinawa, the red walls and roofs of Shuri Castle stood proudly in the hills on Naha, looking down on the world below.

This isn’t the first time, however, that Shuri Castle has been razed to the ground. Most of the castle was destroyed in the fierce Battle of Okinawa at the end of World War II. After the war, Ryukyu University occupied the site. At the same time, various parts of the complex were restored and reopened. The Shureimon gate was restored in 1958, and the Kankaimon gate was restored in 1974. Finally, in 1989, work began on restoring the main buildings of the castle—including the stunning Seiden. Then, in 1992, the fully restored castle and park opened to the public.

The main gate when entering the castle is the iconic Shureimon, which was built between 1527 and 1555. The gate features on the rare 2,000 yen bank note.

As with castles on the mainland, there are a series of gates to pass through before reaching the central palace buildings. Entering the grounds of the castle is free, but passing through the inner Koufukumon gate requires a ticket which can be purchased just to the left of the gate.

Once through the Koufukumon Gate, you will be right in front of the Seiden—the hall which was the King’s residence and which housed the throne room. This is the area which suffered the most damage during the 2019 fire and is currently under reconstruction.

After leaving the Seiden at the rear there are more fortifications and smaller buildings to explore.

Exiting again through the Koufukumon (the place where they collect tickets), continuing straight ahead will take you to a large complex called Suimuikan (Shurijo Castle Park Rest Center) with souvenir shops, restaurants and an underground carpark.

Hours of admission vary by season. Opening time is 8:30am throughout the year. From April to June and again from October until the end of November, the park closes at 7pm. From July to September closing time is 8pm. During the cooler months of December to March, the park closes at 6pm. The park is also closed completely on the first Wednesday and Thursday of July each year.

Shuri Castle is a 15 minute walk, or a 3 minute bus ride from Shuri Station on the Okinawa Monorail. Okinawa Bus buses run from the Okinawa Bus sales office in Naha to Shurijo-mae bus stop once or twice an hour from 6:39am to 7:05pm (see the timetable in Japanese here). Take the number 7 or 8 bus. The journey takes approximately 30 minutes.

If going by car, be aware that the approach road gets extremely busy and traffic grinds to a halt—especially when cruise boats from China are in port. Parking is ¥320 for a regular car.