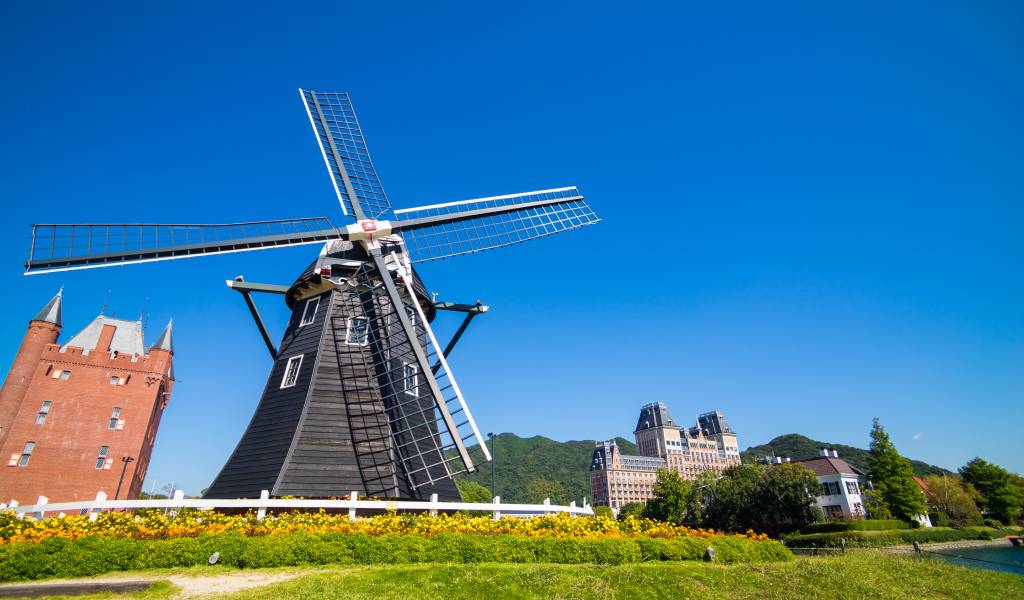 Can you guess where the above picture was taken?

If you answered “The Netherlands,” “Holland,” or “somewhere in Europe,” sorry, but you’re mistaken! That’s Huis Ten Bosch, a theme park in Sasebo, Nagasaki that was designed to look like a Dutch village. If all you know of Japan’s theme parks are Disney and Universal Studios, this is a theme park you might want to consider. The name Huis Ten Bosch is Dutch for “house in the woods,” and is named after one of the Dutch royal family’s residences. Most of the theme park uses Dutch architecture, so just walking around is already a pleasure in itself.

Pro tip: The theme park is huge; so big that it’s better to take a boat ride down the park’s 6-kilometer-long canal if you get tired of walking and just want to see some scenery.

This area has restaurants, shops and a hotel. Here, you can find the Giyaman Museum (a glass art museum), a floral clock, a carousel, and Pandora, a music box museum.

Of particular interest here is Palace Huis Ten Bosch, a recreation of its Dutch namesake. Inside it is a museum. There’s also an imperial garden behind the palace. There are two other museums in this area: a porcelain museum and a shipping museum. You can also ride the De Liefde, a reconstruction of a Dutch ship that reached Japan in the 17th century. Also, for the dinosaur nerds, there’s an AR dino-hunting experience available.

This area is known for the Domtoren, a 105-meter-high recreation of the Netherlands’ tallest church tower. The Domtoren has observatories on its 4th and 5th floors, from which you can see a breathtaking view of Omura Bay. Tower City’s many restaurants mean it’s also a great place to get lunch.

Of course, this is where most of the attractions are! If you’re a fan of the anime One Piece, you can take a themed cruise here. It also features the Horizon Adventure Plus simulation of a great flood that befell Holland (real water is involved and the attraction features weather effects). For the sweet-toothed, considering Count Chocolat’s Mansion, which is pretty much what it sounds like. There’s also a mirror maze, a trick art museum, and a 360-degree CGI film theatre. If all the excitements leaves you in need of a drink and somewhere to sir down, drop into the Ice Cafe, where everything is made of ice.

Aside from the eponymous art garden, it has a dome theater which projects panoramic 360-degree images, a helicopter sightseeing ride, and an illuminated Ferris wheel. For the romantics, horse-drawn carriage rides around this area are available.

One for the adrenaline fiends, this area has a zip line, a five-storey maze, and the Sky Castle adventure course. There’s also the escape-room-style Dinosaur Woods (for a limited time only; don’t try to do this in mules) and, for the little ones, Bouncy Land.

This area offers several interactive acitivities, all involving light. You can visit a labratory to make your own flower of light and then try to spot it in the secret garden at Flower Fantasia. You can also explore the ocean or space at the following light galleries: Sea Fantasia and Space Fantasia. Or burn off some energy at Playground Fantasia, which combines athletics and lights.

Naturally, the welcome gate and farewell gate have souvenir shops where you can buy not only Huis Ten Bosch-themed souvenirs, but also Nagasaki’s specialties, such as castella, a sponge cake introduced by the Portuguese. Near the welcome gate, you can also find a teddy bear museum, and you can inquire about canoeing or renting a 2- or 4-seater bicycle.

Huis Ten Bosch also has some primo seasonal sights. If flowers are your thing, Huis Ten Bosch has beautiful tulips from mid-February to mid-April, shibazakura (moss phlox or pink moss) throughout April, roses from May to June, and hydrangeas from June to July. They’ve also got pools, water fights, and fireworks in summer.

But what Huis Ten Bosch is probably best known for is Kingdom of Lights, its seasonal illuminations. This impressive light display consists of over 11 million LED lightbulbs, and is said to be the world’s largest illumination display, as well a consecutive number-one contender for the title of Japan’s best illumination. The best time to see the illuminations is in winter, especially during Christmas season, as these illuminations are a popular Christmas attraction. Photos just don’t do the illumination justice. After all, it’s not just a part of the park that’s lit up—the entire park is!

Know before you go: tickets, opening hours and transport options

An adult one-day ticket (called a “passport” on the parks’s website) for Huis Ten Bosch comes in at a very reasonable ¥7,000, and you can get them at the park or in advance online. Teens get in for ¥6,000, kids for ¥4,600, and senior citizens for ¥6,500. A two-day pass is a little less than double that price, and three-day passes as also available. Please note that some attractions will cost a little extra.

There are two late-in-the-day options that are a few hundred yen cheaper: an After 3 and an After 5 Pass, which allow, as the names suggest, access after 3 pm and 5 pm, respectively.

If you’re particularly flush, there’s a VIP Premium Passport, which allows you to skip the queues and additional fees. These go for an additional ¥3,000..

The park is open from 9 am to 8 pm every day. Some attractions and restaurants may open at different times.

How to get to Huis Ten Bosch

From Nagasaki Station, take a train (either the JR Seaside Liner Rapid or a normal train) to Huis Ten Bosch Station in Sasebo. The 90-minute ride costs about ¥1,470. There are also buses to Huis Ten Bosch available on weekends and holidays. If you have a SUNQ Pass, you can use that for the bus.