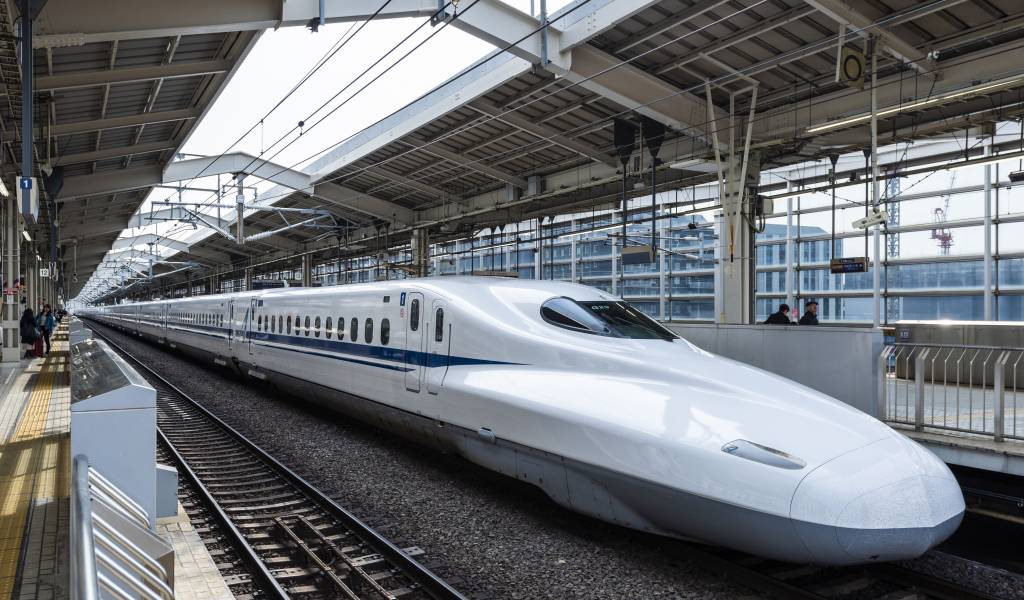 A Complete Guide to the Kyūshū Shinkansen

Kyūshū is mountainous and the Shinkansen can’t take you everywhere (yet?), but it can take you many places — some of which we highlight below. It runs the length of the island, connecting Fukuoka in the north to Kagoshima in the south.

Overview of the Kyūshū Shinkansen

The Kyūshū Shinkansen starts at Hakata Station in Fukuoka before winding its way down to its final destination at Kagoshima-Chūō Station in Kagoshima Prefecture. It stops at 12 stations along the route and has quite a few tunnels and steep slopes along the way due to Kyūshū’s mountainous terrain. At its fastest, the whole journey takes around 1 hour 16 minutes.

Not many would brave the direct 6-hour-and-40-minute journey, but it is possible to travel from Tokyo to Kagoshima, via the Tōkaidō (Tokyo to Osaka), San’yō (Osaka to Fukuoka), and Kyūshū (Fukuoka to Kagoshima) Shinkansen lines, as they form one continuous route.

If you would like to go to Nagasaki, there is the West Kyūshū Shinkansen. However, it does not connect directly to any Shinkansen line, so you would have to take a limited express train from Hakata to Takeo Onsen Station before getting on the bullet train.

There are exciting plans in the works for an East Kyūshū Shinkansen, which would make visiting Miyazaki a lot more convenient, as well as another Shinkansen line that would go across Kyūshū and link Kumamoto with Ōita.

Highlights along the Kyūshū Shinkansen

Services on the Kyūshū Shinkansen

There are three services on the Kyūshū Shinkansen (from fastest to slowest): Mizuho, Sakura, and Tsubame. The Mizuho and Sakura run via the San’yō Shinkansen as well, making the whole route between Shin-Osaka and Kagoshima-Chūō.

* The stations that the Sakura service stops at depends on the time of day, but it always stops at Hakata, Shin-Tosu, Kurume, Kumamoto, Sendai, and Kagoshima stations.
** You cannot use the JR Pass on the Mizuho service, but you can use the regional JR Kyūshū Rail Pass.

Note: Sometimes the trains will swap between the N700 and the 800 type no matter the service, so check ahead if you are dying to ride a particular train model.

You will need to reserve a luggage space on the Kyūshū Shinkansen if you have suitcases and baggage above 160cm in overall dimensions. If you are wondering how to calculate that or how to reserve, please take a look at our guide on understanding the new rules.

How to buy tickets

Current basic fare prices from Hakata to Kagoshima are ¥10,640 one-way for a reserved seat ticket and ¥10,110 for an unreserved seat. There are several ways to buy tickets, including direct from the station and these websites:

Note: There is an English-language website for Eki-net, but it tends to miss out on the discounts offered by the Japanese-language site.

Your best bet for getting the cheapest price on the Kyūshū Shinkansen is to book directly through the JR Kyūshū Reservation Service. Currently if you book online, you can get the following discounts when buying a reserved ticket:

Note: These discounts are not available if you book in person. All tickets include a reserved seat.

Getting discount tickets through Eki-net

Eki-net is a useful website for getting cheap, discounted tickets in advance. It is the chosen website for many on-the-go travelers because of its ticketless option (if you have an IC train card). The only problem is that everything is in Japanese. To make things easier, you can always use a translator browser extension.

Note: Currently, there are no discounts available for the Kyūshū Shinkansen through Eki-net; it is better to use the official JR Kyūshū ticket site (see above).

When walking around the streets near a busy station (Shinjuku, Tokyo, Osaka), you may find a few rag-tag stalls with cheap ticket prices plastered on their fronts. They are called kinken shops and are a good choice for last-minute train discounts. If you haven’t already bought a discounted ticket online, it’s worth turning up to see what they have. Discounts range from anywhere between ¥80 and ¥2,500.

Note: There are also online versions, but they tend to be difficult websites to navigate and are all in Japanese.

Of course, the JR Nationwide Rail Pass covers this route, but there are also JR Kyūshū Regional Rail Passes and other JR West Passes.

What rail passes are good for the Kyūshū Shinkansen?

There are several sites that offer discounted rates when you book a hotel and Shinkansen ticket together. However, it can be hard to determine how much of a discount you are getting — usually not much — and they tend to be in Japanese.

Because you don’t want to be here all day, we’ve narrowed down our favorite five stations.

Hakata Station is the entranceway to Fukuoka Prefecture, as well as being the busiest station in Kyūshū. You can jump on the local bus or the Kūkō subway line and be at most of the city’s main sights in under 30 minutes. There’s Ōhori Park, which boasts a gigantic pond, pavilion on the water, and is next to the Fukuoka Castle Ruins; Fukuoka Tower, with a spectacular night view; and the Sumiyoshi and Kushida shrines, both around 10 minutes from the station.

But the main sight of Fukuoka is actually not a place you visit — it is something you eat. There are nearly 100 yatai (food carts or stalls) dotted around Hakata Station. It’s worth getting off the train just to inhale a bowl of cheap, yet delicious, ramen before continuing your Kyūshū journey. See this useful map to catch the best ones.

Where can I go from Hakata?

Fukuoka City is the second-largest port city in Japan. That means it has convenient access to the whole country (and even Busan in South Korea). Its ferry terminal is a 35-minute walk or 20-minute bus from Hakata Station. If you hop on a ferry for 1 hour 45 minutes, you’ll get to the remote and tranquil Iki Island. You can also hop on an overnight boat to see the ghost of Tsushima.

Just south of Hakata is Kurume. While the Shinkansen station is a bit far from the action, the busier Nishitetsu-Kurume Station is only a 10-minute bus ride away (or a 30-minute walk). Close to here is the Bird Center, Fukuoka Science Museum, and Art Museum. If you hop on a bus you can head to Daihonzan Naritasan Kurume Temple, which features a giant Kannon statue and similarly sized pagoda.

There are plenty of fruit farms in the area, as well as firework festivals in the summer. One of Japan’s great rivers, the Chikugo River, also runs through Kurume.

Where can I go from Kurume?

From Nishitetsu-Kurume Station, you can get to Yanagawa in 23 minutes. This town is known for its Amsterdam-like canals and riverboat rides. You can also get off at the Shinkansen stop after Kurume (Chikugo-Funagoya Station) and get a bus to Yanagawa.

You can also take a bus for 50 minutes to Yoshinogari Historical Park, an ancient archaeological site. Alternatively, get off at the Shin-Tosu Shinkansen stop and take the Nagasaki Line.

If you want to get off the beaten track, take the Kyūdai Line into the center of Kyūshū and visit onsen towns like Hita Onsen and Yufuin.

Kumamoto is an impressive station, and not just because it was partly designed by renowned architect Tadao Ando; it can take you almost anywhere you need to go within Kyūshū. You are bound to see the face of Kumamoto’s omnipresent bear mascot, Kumamon — head to Kumamon Square if you want to get up close and personal.

The most visited sight in Kumamoto City is without a doubt the 17th-century Kumamoto Castle. While the main building is a reconstruction, you can still find some original treasures from the past. The castle is a 30-minute walk or short tram ride from the station. Take the Hōhi Line a few stops to Shin-Suizenji Station, from there you can make your way to Suizenji Jōju-en Garden, a beautiful garden filled with shrines, ponds, and an artificial, grassy Mt. Fuji look-alike.

Where can I go from Kumamoto?

Kumamoto can be used to discover the mountains in the center of Kyūshū, as well as for the towns on the east coast. There is a direct line to Aso Station (for Mt. Aso) that takes around 1 to 1.5 hours, depending on the train. You can also travel horizontally across Kyūshū towards Beppu and Ōita using the JR Hohi Line, although it takes almost three hours and is slightly slower than going via Kokura Station in the north.

You can also grab the ferry from Kumamoto port (around 30 minutes by bus from the station) and head west, over the sea, to the Shimabara Peninsula and Nagasaki Prefecture.

Remember, this is not the famous Sendai that is in Tōhoku (find out about that city here).

Sendai Station is in Satsumasendai City, significant for its role as part of the Satsuma Domain during the Edo period (1603–1868). The Sendai River runs through the center and accentuates its countryside landscape. There are also plenty of onsen. An example is Taki Hot Spring, which has more than 800 years of history.

But Satsumasendai City is mainly known as the jumping off point for the Koshikijima Islands.

Where can I go from Sendai?

There is an easy shuttle bus service that goes from Sendai Station to the ferry terminal in 30 minutes for ¥150. From here you can head on a ferry towards the Koshikijima Islands and be there in an hour.

There is also Imuta Pond (though it is large enough to be a lake), which contains rare species of flora and fauna. However, this is only accessible by car from Sendai Station (and takes around 40 minutes).

The last stop on the Kyūshū Shinkansen is one of the best. Once you arrive at Kagoshima-Chūō, you won’t miss the imposing form of Sakurajima, the smoking, active volcano. While Sakurajima is accessible by land, it is quicker to take a ferry from the designated port and be there in 15 minutes. You can reach the port, and most other areas of Kagoshima City, by streetcar.

The city is picturesque and has both mountain and ocean views. You can see this dynamic landscape in its entirety from Shiroyama Park and Yoshino Park. Take a trip to the Kagoshima Aquarium and get a free viewing of dolphins in the waterway right outside. But Kagoshima isn’t just a pretty face, it is also rich in history, and spots like the historical samurai house Sengan-en give you an insight into Japan’s feudal past.

Where can I go from Kagoshima?

As a port city, Kagoshima is the gateway to some of Japan’s most popular vacation spots. It is 1 hour 15 minutes on the plane to Okinawa (25 hours if you want to take the ferry) and has easy access to the islands in between, such as Yakushima (around 2.5 hours by hydrofoil ferry) — the island that inspired Ghibli’s Princess Mononoke; and Amami Oshima (45-minute flight or 11-hour ferry) — known for its beautiful white beaches and whale-watching tours.

By train using the Kagoshima Line, you can also make your way to the mountains and explore Kirishima, known for its mountain ranges and hiking trails.