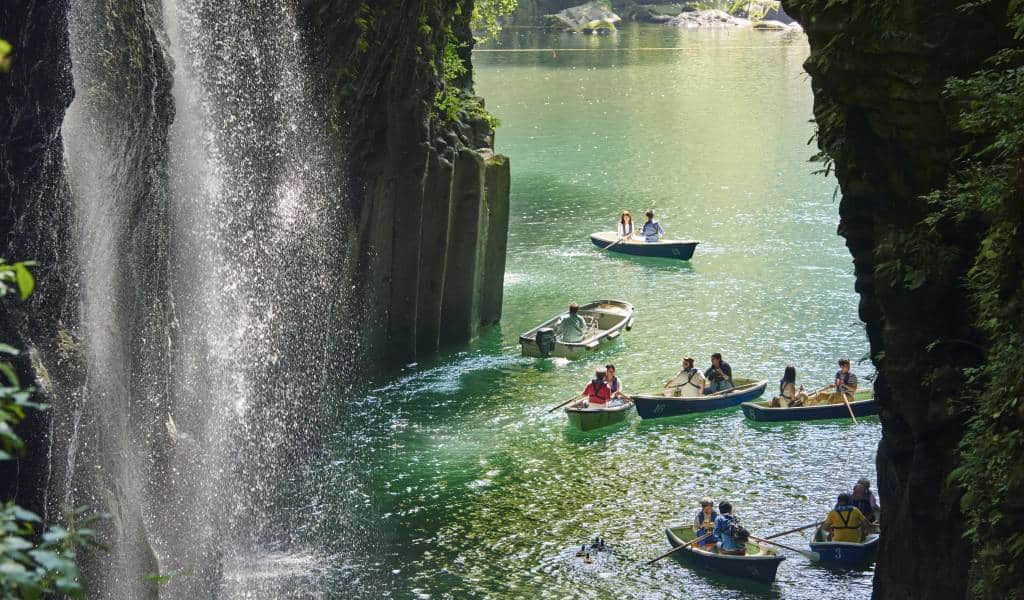 A resort area because of its warm climate, Miyazaki is a prefecture on the southeast coast of Kyushu. In the days before Okinawa and Hawaii became popular, Miyazaki was THE place in Japan to go for a honeymoon. The traffic has since slowed, but there are still traces of its vacationing legacy. But not to worry, as there are plenty of non-touristy cultural and historical attractions to see.

Osaka (Itami), Nagoya, Fukuoka are short flights-about an hour or less. There are many flights from Tokyo’s Haneda Airport daily, which take about 90 minutes. Sometimes you can buy tickets for as low as JPY 11,000, especially on smaller airlines.

Although they take a bit longer, flights from Okinawa, Seoul, and Taipei are also available. Miyazaki’s airport is also connected to Miyazaki’s central train station by the Miyazaki Kuko Line. It’s fully covered by the Japan Rail Pass.

To get to Miyazaki by train, take the Shinkansen to Kagoshima Chuo Station. From there, you can take the JR Nippo Line directly to Miyazaki. The whole journey costs about 32,000 yen and takes around 10 hours, so you might want to make a proper holiday of it and take a day or two to enjoy Kagoshima first.

Most famous attractions like Miyazaki Shrine are accessible from JR stations and buses. If you’d prefer to go around mostly by bus, one-day pass is also available.

If you plan to travel to attractions outside Miyazaki City like Udo Shrine or other prefectures, it will be worth renting a car.

Kyushu is known for its hundreds of hot springs (onsen), some of which you can enjoy in Miyazaki. Other lodging to try is the Phoenix Seagaia Resort, which definitely lives up to its “Resort” name. There are tons of offerings to keep you entertained in this complex that takes up a big chunk of the coast.

Aoshima is an island with a lot to see. It is famous for a unique rock formation that surrounds it called the “Devil’s Washboard” and Aoshima Shrine. This one in particular is good for marriage (here’s the honeymoon thing again). The nearby beach is another great place to relax or enjoy some water sports.

Miyazaki is also known for its ties with ancient royalty. Miyazaki Shrine is dedicated to the legendary first emperor of Japan, Emperor Jimmu, and he himself supposedly established it over 2,000 years ago. On the other hand you’ve got Udo Shrine, which is dedicated to his father Yamasachihiko. Built into a cliffside cave, it offers great views of the ocean. The Saitobaru Burial Grounds in east Miyazaki is said to include the graves of some of ancient Japan’s most powerful figures.

All Articles about Miyazaki

Things To Do in Miyazaki