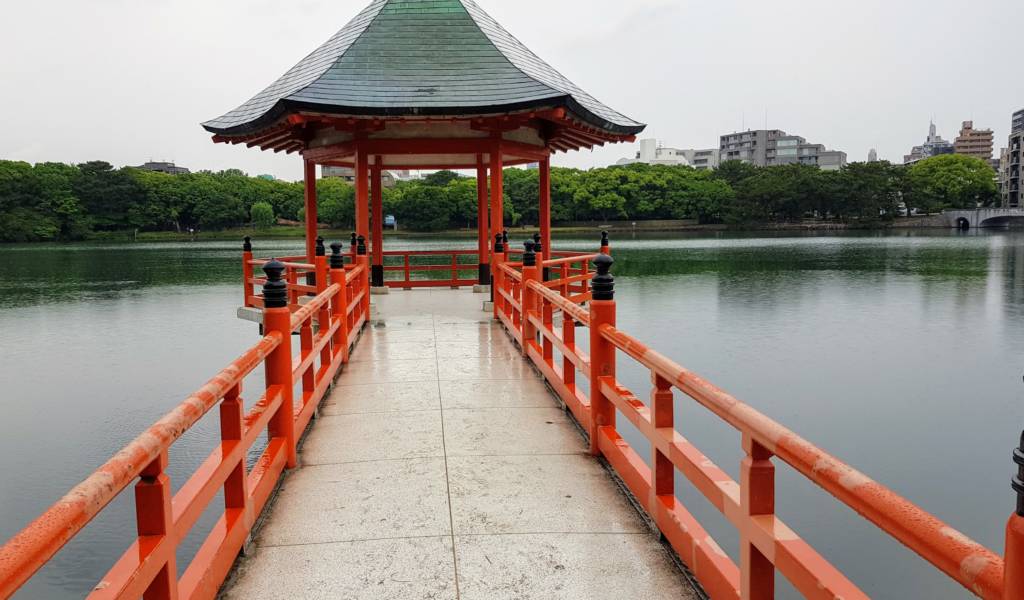 “Ohori” means “great moat”, which points to the origin of the park as the moat for nearby Fukuoka Castle. Since 1929, the area around the great moat was opened to the public as Ohori Park.

Today, the park is an oasis of green and blue within the big city hustle and bustle of Fukuoka. It’s a site for picnics, barbecues, jogging, dog walking and just passing the time.

If you want to get out on Ohori Pond, there are rowing boats, water strider boats and swan boats available at the boat house at the northern end of the pond. Depending on the size, swan boats rentals range from ¥1,100 to ¥1,600 for 30 minutes. Strider boats (imagine something like a water bicycle) are ¥600 for a single rider version or ¥1,000 for the tandem version, also for 30 minutes. The row boats (which hold up to 3 adults) are the best value at ¥600 for 30 minutes.

The circumference of the pond is approximately 2.2 km. Alternatively, you can cut across the middle of the pond. A string of small islands is linked by bridges. The central island is also the location of the iconic pier for which the park is known. With breaks for admiring the view, exploring the park on foot can easily soak up a couple of hours.

Due to the lovely scenery and the absence of roads, the park is Fukuoka’s number-one jogging spot. The joggers emerge in the early summer evenings when the heat from the day has begun to dissipate.

Within or adjoining the park are various attractions including Fukuoka Castle, Fukuoka Art Museum and Ohori Park Japanese Garden.

The closest subway station to the park entrance is Ohorikoen Station on the Kūkō Line. There are also a large number of bus routes that stop at the Ohorikoen Bus Stop.