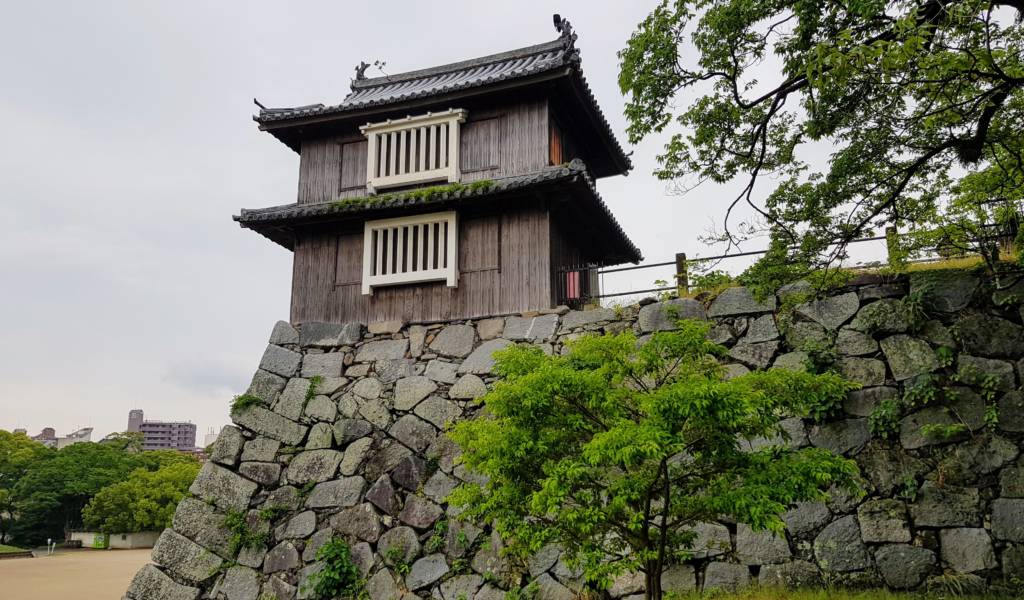 The ruins of Fukuoka Castle, abandoned at the beginning of the Meiji Era in 1870, lie on a hill just to the east of Ohori Park.

If you’re after a primer to the castle and its history, stop by the Fukuoka Castle Visitor Center on the edge of Maizuru Park before venturing up the hill.

Construction of the castle began in 1600 by the powerful Kuroda clan and was completed by 1607. Despite having a central tower platform, there is argument over whether a central tower ever existed on the platform. The earliest known maps of the site from 1646 shows no tower. However, some argue that there was a tower, but it was quickly destroyed in deference to the Tokugawa Shogunate.

Only a few gates, turrets and the stone foundations remain from the original castle. The Kinen Turret is a small building that remains on the northwest corner of the castle. It’s visible to the left as you ascend into the main part of the castle.

Continuing towards the center of the complex are the main tower foundations. Climbing to the top reveals a panoramic view of Fukuoka.

The largest single building is the Tamon Turret, a long building on the southwest corner of the complex that served a defensive purpose.

Slightly outside the castle grounds, to the north and to the northwest respectively stand two gates—the Shimohashi Omotemon gate and the Najima Mon gate.

Overall, you should allow about 90 minutes to 2 hours to explore the whole site. Note that the castle grounds are not accessible, so they aren’t recommended for anyone with mobility issues. There are a few entrances to the castle. Entry is free.

Check out our things to do in Fukuoka guide.