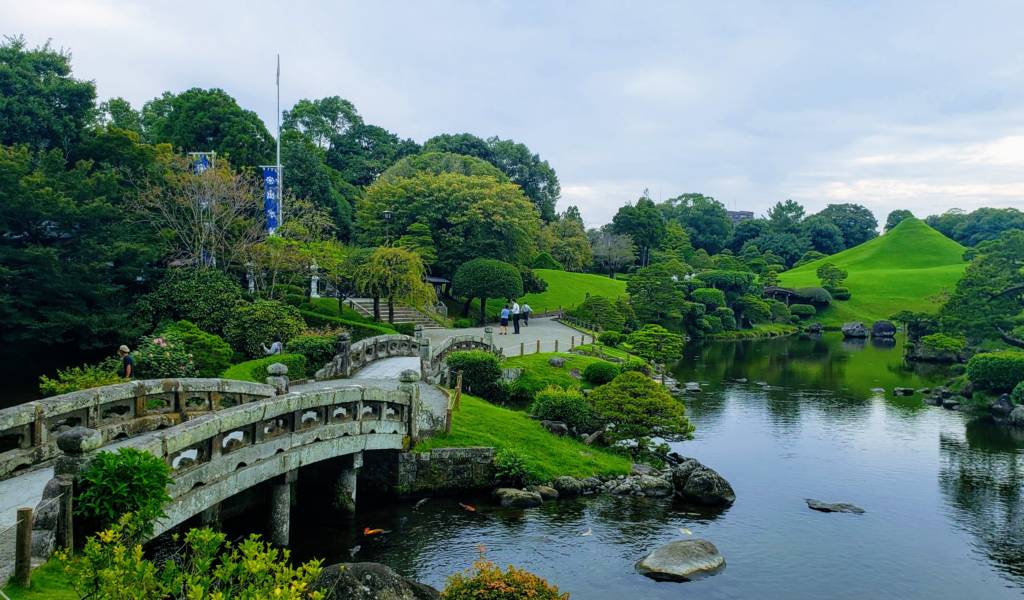 A selection of Japanese landmarks in miniature, Suizenji Garden is a beautiful example of traditional landscaping.

Originally founded in 1632 by Tadatoshi Hosokawa – the first lord of the Kumamoto domain – it was added to and funded by his sucessors, eventually completed in 1671. Since then, the garden has remained largely the same, withstanding earthquakes, typhoons and wars, albeit with minor reconstruction over the years. Visitors can stroll across Tokyo’s Nihonbashi bridge towards a grassy Mt. Fuji, perched beside a little lake Biwa – all scenes taken from the 53 Tokaido post stations.

As with all traditional Japanese Gardens, there are seasonal elements including plum and cherry groves as well as areas dedicated to the six traditional Higo flowers: iris, chrysanthemum, camellia, morning glory, sasanqua and peony flowers – all blooming at different points throughout the year. Nearby you’ll find the small Sekitei rock garden, with statues and monuments dotted throughout the grounds.

Close to the main gate is the Izumi Shrine – the first inhabitant of the land that would eventually become the garden. Visitors queue to take a sip of the pure water which flows from Mt. Aso – believed to give longevity to those who taste it.

Nearby, the thatched Kokindenju building is the perfect place to relax with green tea and sweets while overlooking the garden. Containing the room in which the initiation of Prince Toshihito, the younger brother of Emperor Gyozei, took place, it was moved here and restored due to the strong ties the garden holds with the Hosokawa family. It is open from 9am – 5pm and you can try green tea and traditional sweets inside, looking out across the pond.

The grounds are also home to a beautiful Noh performance stage which was originally built in 1878, along with Izumi Shrine. However, it was burned down in 1965 and replaced with the Noh theater of the Matsui family, the former lords of the Yatsushiro castle. The building was carefully relocated and now stages annual Noh performances as well as Jazz, musical drama and Japanese dance shows throughout the year.

Thanks to the presence of Izumi shrine and its subsidiary Inari Shrine as well as the Noh Theater, the gardens are host to a series of annual festivals and ceremonies. On the 1st and 15th of each month you can see the Tsuknami-sai, a ceremony wishing for peace which features three traditional dances. Throughout the year they host the following festivals:


The garden has two main entrances with coin lockers located next to the front ticket office along with toilets and souvenir shops. To reach the garden you can catch the city tram from Kumamoto Castle to Suizenji Jojuen Garden which takes 20 minutes. From Kumamoto Station it is 40 minutes by tram or a 20 minute drive, while the airport is half an hour by limousine bus.
Open with Maps
水前寺成趣園
Kumamoto
Japan, 〒860-0956 Kumamoto Prefecture, Kumamoto, Chuo Ward, Suizenji Koen, 8−1
Map
+81 96-383-0074
March - Oct: 7.30am - 6pm | Nov - Feb: 8.30am - 5pm
Adults: ¥400
Children: ¥200