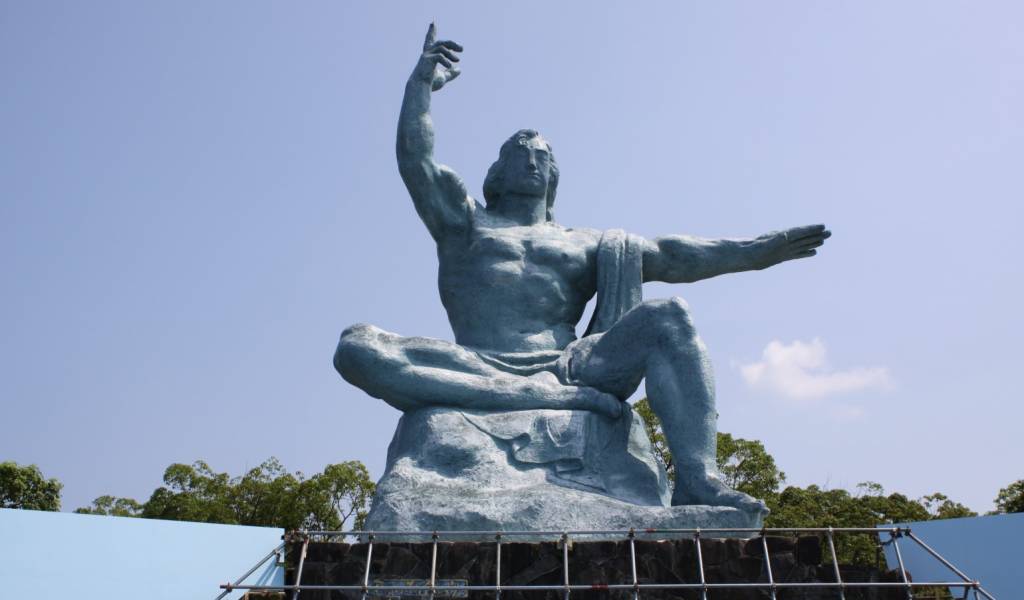 The Nagasaki Peace Park commemorates the atomic bombing of the city of Nagasaki on August 9th, 1945—an event that caused huge destruction and led to the death of approximately 75,000 people. Today, the park and associated memorials are a major destination for visitors to the city.

The Nagasaki Peace Park occupies a hilltop a few hundred meters north of the bomb’s hypocenter—the point on the ground directly below the detonation of the bomb.

The focus of the park is on the Peace Statue set at the north end of a wide square. At first glance, the statue may seem a little out of keeping with a peace park, but the artist’s rationale sheds some light on the structure: the outstretched finger pointing to the heavens warns of the risk of nuclear weapons while the left arm represents peace. The muscular countenance indicates the resolve to make sure it never happens again.

The park is quiet and contemplative with only the sounds of cicadas in summer, the voices of visitors and the wind whispering through the trees. At exactly 11:02am each day—the exact time that the bomb detonated—a mournful song plays through speakers spread throughout the park. Just walking through the park in the oppressive August heat requires multiple bottles of water just to keep hydrated—something that must have been almost impossible for the bomb survivors in the aftermath.

Ruins of a prison that once stood on the hill and which were flattened to its brick foundations by the explosion remain as a reminder of the power of the blast. There’s a contemplative atmosphere, with sculptures and monuments to peace scattered around the park—many donated by cities around the world.

Heading south there is a fountain, which (on days when temporary shelters aren’t erected for the yearly commemoration) affords a view of the peace statue in the distance. Further on are steps and escalators that lead down to Urakamimachi Dori—a bustling avenue, beyond which are sleek trains running on elevated tracks. Staying on the same side of the avenue, take the crossing and continue into Hypocenter Park.

The Atomic Bomb Museum is located just to the southeast of the Hypocenter Park on a small hill. Admission to the museum is ¥200 for adults and ¥100 for children.

As it seems, the main goal of the museum is to stand as testimony to what happened, so that the world will never forget. To this end, different sections of the museum are labeled with signs such as “Verification of Blast Damage” and “Verification of Radiation”. Until you reach the “Appeals of the Atomic Bomb Survivors” section, everything is very matter of fact. The stories from survivors in this section lay bare the heart-wrenching human pain: parents gathering firewood to cremate their children, families reduced to a single member and forced laborers dying slow painful deaths far from their homes.

The last part of the museum attempts to put the tragedy of Nagasaki into perspective with displays about the build-up to war, the risks of militarization, the dangers of conflict, and what has played out with nuclear proliferation over the seventy years since the bombing.

If you’re planning your Nagasaki itinerary, plan to spend two to three hours at the Peace Park, Atomic Bomb Museum and the surrounding area.

Getting to Nagasaki Peace Park

If traveling by car, there is a large underground car park beneath the square in front of the Peace Statue. Parking is ¥300 an hour and there are usually plenty of free spaces.

If coming from elsewhere in Nagasaki, the easiest way to get here is to take the Nagasaki Tramway to Matsuyamamachi on Route 1 (blue) or 3 (red). The fare for adults is ¥120 and ¥60 for children.

Disclosure: Our writer’s trip to Kyushu was undertaken with the support of Japanican.
Nagasaki Peace Park and Atomic Bomb Museum
Admission to the park is free. Museum admission is 200yen for adults and 100yen for children.
Nagasaki
Official Website
Written by: Greg Lane
Greg's Japan favorites are: Hirosaki Guide: Japan in a Nutshell, Hoppin’ on the Brew Wagon: Kanazawa’s Best Craft Beer Bars, 10 of Japan’s Most Impressive Castles
Filed under: Travel
Tags:
Sharing