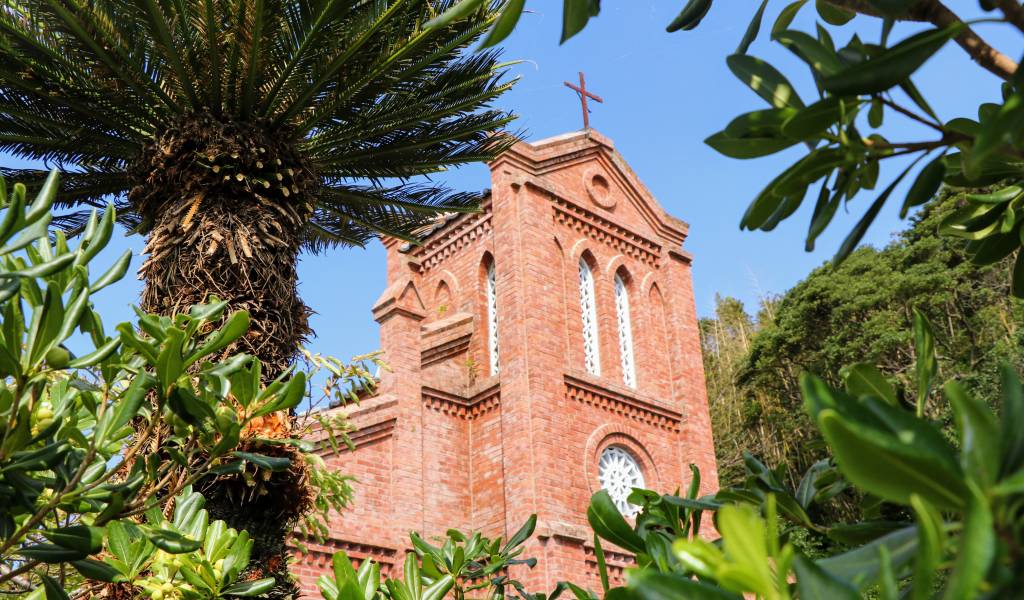 Called Goto-retto in Japanese, the Goto Islands are a history-packed island-chain off the coast of Nagasaki. Home to the persecuted hidden Christians of Japan, the islands boast coastal walks, volcanic beaches and unique noodle dishes made in the pots of hell.

Where are the Goto Islands?

The Goto Islands are in the East China Sea, around 100km from the coast of Kyushu. They’re part of Nagasaki Prefecture and are quite remote, with most accessible only by boat. Their isolation was partly why they became a hiding spot for persecuted Christians, and today means they have a quiet and uncrowded appeal for those seeking an island getaway.

The chain consists of five main islands with a collection of around 140 smaller sattelite islands. The primary island is Fukue, with three smaller islands sandwiched between it and Nakadori Islands. There are other inhabited islands, with options like Ojika and Nozaki islands also great to visit.

First introduced to Japan by missionaries in the mid-16th Century, Christianity grew rapidly in popularity in the Kyushu region. Threatened by the growth in followers, the Tokugawa shogunate banned Christian activities in 1614, with many Christians persecuted and killed over the years. The prohibition wasn’t officially lifted until 1873, with small and dedicated communities keeping their faith hidden for the years in-between.

Called ‘kakure kirishitan’ in Japanese, the hidden Christians developed ways to celebrate their faith in secret. With items hidden or disguised, symbols secreted in buildings and even coastal rocks imbued with Christian meaning, the signs of the hidden Christians are ample, if you know where to look. While some rejoined the Catholic faith when the ban was lifted, many continued to worship in the ways developed over the years, with churches built in celebration and in memorial.

There are dozens of small churches and convents to visit across the Goto Islands, along with the Christian Cave. Twelve sites have been designated a UNESCO World Heritage Site since 2018, with the following included.

The best sightseeing and nature spots

The Goto Islands have a whole host of sightseeing spots, from cliffside walks to tranquil beaches, with a few landscaped gardens in between.

Takahama Beach on Fukue island is one of Japan’s top 100 beaches, and top 88 swimming beaches. A perfectly curved cove, the waters change from turquoise to a deep sapphire as they deepen, best seen from the nearby Gyoran Kannon Observatory.

Trekking along the Osezaki Cliff line is a glorious way to see the rugged coastline of Fukue. The Osezaki lighthouse is perched on a windswept hilltop looking out across the East China Sea. The steep hillside steps lead to a viewing deck, with the trail taking around an hour in total. As the most south-western spot on the island, it’s known for having the last view of the sunset in Kyushu, making a great end to a day of exploring.

The Red Sands of Ojika Island

On the smaller Ojikajima, visitors can rent bikes and easily cycle the 34km-circumference island in a day. The small town of Ojika has friendly cafes and a bakery among its traditional buildings, as well as a folklore museum. There are some stunning beaches to enjoy as well, including the unusual red volcanic sand beach of Akahama.

The Goto Residence and Garden

Back on Fukue Island, the Goto Residence and Gardens is an elegant and beautifully maintained traditional house. Designed as the retirement villa of the 30th head of the Goto family, Goto Moriakira, it is part of the Ishida Castle ruins. The property design is dotted with turtles and plums which are fun to spot, as well as the hiding spots and security details built-in for his protection. The gardens have a pond designed in the shape of the Kanji for heart, and were designed by a banished priest who watched over their creation from a pond-side rock.

With small communities and local produce heavily relied upon, it’s no surprise that the islands have their own speciality produce.

Goto Udon: Made to be Shared

Goto Udon is a local speciality, and there’s no better place to try it than the family-owned Ota Udon. With a wooden storefront inspired by the noodles hung out each day and awarded the 2018 japan Wood Design, award, it’s clear they care deeply about their craft. The noodles are made using camellia oil from the surrounding mountains, local flour, Nakadori spring water and salt from the nearby sea and stretched using a sublte twist-technique called te-yori. Hung for days and brushed, they are served in a family-style pot that boils furiously, earning the name hell-pot. Thanks to their elasticity from the unique ingredients and technique, they don’t overcook, with a firm texture called koshi. Now owned by the fourth generation, Ota Udon offer the chance for visitors to join in making noodles as well as taking them home as souvenirs.

Tsubaki Oil: From the Camellia Seeds

One of the most well-known exports of the Goto Islands, Camellia Oil is used in beauty products far and wide. In a small workshop on the northern coast of Shin-Kamigoto on Nakadori Island, you can try your hand at producing the oil from the locally-gathered seeds. After crushing with a mallet and feeding through a traditional oil-pres, you’ll be rewarded with clear yellow oil that can be used for hair, skin or even cooking.

Transport on and Between the Goto Islands

The Goto Islands are connected by a network of ferries and small boats, with the larger islands having multiple ports. As with all boat services, they are weather-dependent and visitors will have to take this into consideration when planning their visit. On the islands, bus services run but predominantly serve local needs rather than sightseeing destinations. It is possible to rent electric cars on Fukue and regular cars on other islands, with bikes available from larger local ports for daily rental.

Getting to the Goto Islands

The Goto Islands can be reached from Kyushu by boat, with high-speed services operating from Nagasaki and Sasebo. The largest and closest island of Fukue is 90 minutes from Nagasaki via Jet Foil, with services running around 4-6 times a day and one-way tickets costing approximately ¥8,000. The slower but cheaper car ferry runs 2-4 times a day and costs approximately ¥5,000 yen each way, taking around 3 hours.

There are daily flights from Nagasaki and Fukuoka to the small domestic airport located on Fukue Island.