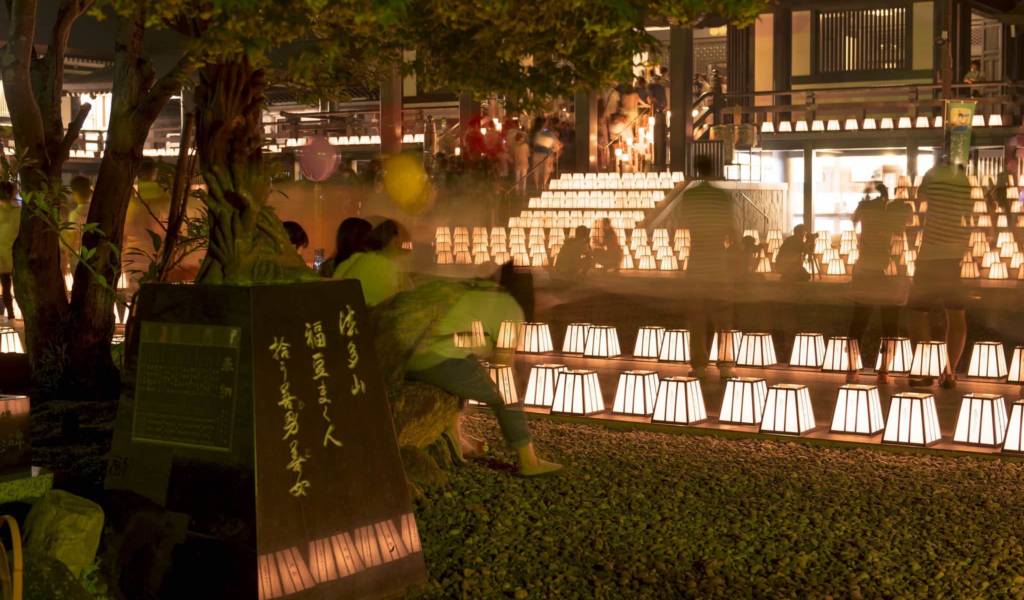 Unless you’re an intrepid explorer of Japan, chances are the announcement of the Rugby World Cup cities was the first time you’d ever heard of Shizuoka’s Fukuroi City. Located on the southern coast of Shizuoka Prefecture, west of the Izu Peninsula, Fukuroi is home to quiet beaches, historic temples, and infectiously laid-back vibes, making it the perfect place to enjoy a slower-paced side of Japan.

Although it may be humble in size, the city is no stranger to hosting blockbuster sports events. In 2002, Fukuroi’s 50,000-capacity Shizuoka Stadium Ecopa—the second-biggest stadium on the Rugby World Cup circuit—hosted some of the 2002 FIFA World Cup’s biggest matches including a quarter-final match between Brazil and England. Fukuroi City has a lot going for it but isn’t the type of place to toot its own horn, so we’ll do the horn tooting instead. Here’s a guide on how to enjoy the stunning and diverse seaside city of Fukuroi.

What to see and do in Fukuroi City

Begin your Fukuroi journey by exploring the city’s more traditional side with a visit to Hattasan Temple. The temple was built in 725 as a dedication to Shokannon Bosatsu, the Goddess of Mercy. It’s long been considered the area’s most important site for good luck and is particularly popular during the New Year period. The grounds surrounding the area are home to over 700 cherry trees, which in spring come to life in a full explosion of soft pink blossoms, and during summer it hosts the stunning Ten Thousand Light Festival. The most interesting point, however about the temple has to be its souvenirs. If you’re feeling down on your luck, then pop by Hattasan Temple to chow down some yakuyoke dango (rice cake covered in red bean paste), which legend has it will remove all your bad luck.

If you’re needing a little more zen in your life, the Kasuisai Temple should definitely be on the itinerary. This 600-year-old Soto Sect temple is the head temple of the Akiha Faith, which is a subsect dedicated to the god of protecting people against fire. For something a little more immersive the temple also offers accommodation packages with monk-guided zen meditation sessions and shojin ryori cuisine.

Positioned just north of central Fukuroi City sits Kasui Yuri no Sono, one of Shizuoka’s most naturally stunning and picturesque locations. Kasui Yuri no Sono is a park–lily garden hybrid. It’s home to around two million flowers spanning 150 different varieties. The peak lily season is between late May and early July; however, it’s worth visiting any time of year to admire the diverse landscape, walk the peaceful strolling paths and sample the unique ‘lily tempura’.

Oigawa Railway is a little out of the way, but well worth the effort if you have time up your sleeve and you’re not quite ready to leave the area just yet. Sitting north east of Fukuroi City, by the Shimada area, the railway is home to a quaint and retro steam locomotive train which travels north to south along the Oi River. The trip offers incredible views of seemingly endless green tea fields and is an excellent way to admire the beauty of Shizuoka from a different perspective. Do be warned though the tickets for the train are often booked months in advance, so plan accordingly.

What to eat and drink in Fukuroi City

To the west of central Fukuroi City is Hananomai Brewing, home to arguably Shizuoka’s most loved local booze producers. The brewery was established in 1864, and for the past 150 years has remained true to its legacy of crafting world-class sake made from 100% Shizuoka-produced ingredients. If you’re interested in learning about the sake brewing process, or just like to enjoy a drink, the brewery offers free tours and tasting sessions most days of the year. Reservations are required for groups of more than 10.

Situated right in the heart of Fukuroi City is where you’ll find Tandoor House, home to some of the best Indian curry this side of Tokyo. The laid-back, favorite local haunt serves a broad cross-section of curry dishes to cater to all tastes and boasts some of the biggest pieces of naan bread you’ve ever seen. If there’s one complaint people have about this place it’s that the portion sizes are so big, it’s hard to get through them, which is hardly a minus by our standards. They’re open for lunch and dinner every day of the week.

Being right by the sea, it’s almost a crime not to try Shizuoka’s sushi. For delicious sushi on a low-key budget, Kappa Sushi is a very safe bet. Part of a nationwide chain, it’s an easy go-to; it’s very family friendly, affordable and very foreigner accessible. And of course, the food is consistently great. It’s probably not going to impress anyone on a date, but for an easy bite, it’s definitely worthwhile.

One of Shizuoka’s most iconic foods is the gyoza, crispy on the outside, soft and juicy in the middle, it’s hard to find a single individual who doesn’t love these fried izakaya staples. Fukuroi’s neighboring city Hamamatsu is said to be home to some of the best gyoza in the nation. Hamamatsu store Fukumitsu serves only gyoza, with the allowance of miso and rice on the side, giving you the best chance of succumbing to a gyoza-induced food coma.

Where to stay in Fukuroi City

If location and price are the two major selling points when it comes to selecting your accommodation, then you can’t miss Fukuroi Princess Hotel. It’s a 10-minute drive from Shizuoka Stadium Ecopa—home of the Rugby World Cup 2019—and a 13-minute stroll from JR Fukuroi Station. The rooms are cozy, so it’s best for solo travelers.

A cruisy 10-minute drive from JR Iwata Train Station, Hotel Route-Inn Iwata is a comfortable mid-range hotel that’s perfect for those who just need somewhere to crash after a big day exploring the area. Ideal for couples and small traveling groups, the hotel also serves Japanese and Western buffet spreads for breakfast and has gender-separated public baths on site.

Definitely not a ‘cheapo’ option, but well worth a mention because it is a stunning ryokan, Yamahara Resort is a traditional ryokan inn with all the bells and whistles, so if you’re wanting to be luxurious for just a night, this is the place to do it. If the idea of sleeping on a futon mattress on the floor is not your idea of luxury living, don’t worry, the ryokan’s rooms come with Western-style bedding. They also offer a multi-course dinner and a buffet style breakfast.