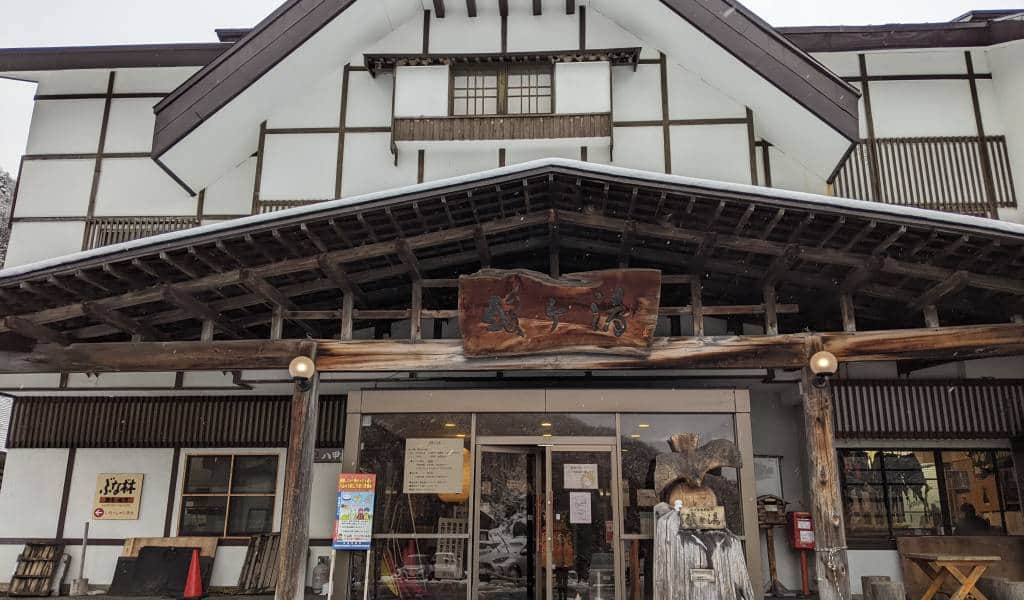 Sukayu Onsen is nestled in the mountains of Towada-Hachimantai National Park in Aomori Prefecture. It’s a popular onsen for skiers and snowboarders in winter, and hikers in summer. Being less than an hour’s drive from Aomori City, and located close to a few other interesting attractions, it can easily be part of a day-trip itinerary.

What’s it known for?

Sukayu Onsen’s main draw card is its senjin-buro, or 1000 person bath — a large(ish) mixed bathing pool. Mixed bathing is becoming less common thesedays, so it’s something of a rarity. Besides that, Sukayu Onsen is also known for it’s distinct timber architecture, and is one of the oldest buildings in the area.

What kind of baths are there?

Sukayu Onsen has three bath areas in total. All of them are indoors, with milky opaque water that hides everything and a sulphric smell that will linger. The average temperature is a comfortable 40 degrees Celsius or so. There is one gender segregated bath each for men and women, and the previously mentioned mixed bath. The gender segregated baths are a little on the small side — there’s only one bath in each.

Unfortunately, even though it’s the main attraction we have, well, mixed feelings, about the mixed bath. There are two pools, and a massaging waterfall inside, with the same murky water as the other baths. But while there are separate change rooms and entrances for men and women, and a line that divides the bath down the middle into men’s and women’s sections, it can still be a little uncomfortable.

Women can buy a modesty towel — towels that are sown together like dresses and are meant to be worn in the water — from the souvenir shop. But they cost an extra ¥1,300, and there is no men’s equivalent. Interestingly, far more men seem to use the mixed bath than women, so one could argue that they need the modesty towels more. Or, one could refuse to buy the modesty towel, and bath like normal (while that is exactly what this author did, she would not necessarily recommend it).

Day visitors can buy tickets from the vending machine at the entrance. It’s ¥1,000 for adults and ¥500 for children (5 to 12 years old). Next, you give the ticket to a staff member, who will give you two rental towels (one big, one small) for no extra charge. Shoe lockers are located near the entrance, and if you’re planning to pick up a modesty towel you can buy them from the souvenir shop.

The official Sukayu Onsen website (Japanese only) does not explicitly state whether tattoos are allowed or not. However, anecdotally there is no signage in English or Japanese to suggest that tattoos are prohibited. This author has several small/medium tattoos and was not asked to cover them by staff members, but your mileage may vary.

Multiple entry cards are available from the reception desk for ¥5,000 for 6 entries. But it is unlikely that you could buy this for a group of six people and all use it at the same time.

Can you stay there?

Sukayu Onsen also functions as a ryokan, or traditional Japanese style inn. Accommodation packages generally include at least one or two meals, and start from around ¥8,910 per person per night.

What facilities are there?

Sukayu Onsen has a nice restaurant near the entrance that serves up some delicious local delicacies — try the scallops — and is reasonably priced. Double check when last order is though, as at the time of visiting it was surprisingly early (around 3 p.m). The souvenir shop has a nice range of local souvenirs and some hot snacks available.

Some vending machines and drink fountains dotted around the building, but they weren’t particularly easy to find. There’s also no central rest area, so if you’re waiting for friends to finish up it’s a bit awkward.

What amenities are in the baths and change rooms?

The change rooms are small and simple — you’ll find lockers with keys for your clothes and valuables, but that’s all. Unlike some places, there’s no water fountain, and the complimentary personal grooming/skin care products are limited to hair dryers and moisturizer.

Inside the baths themselves, there’s a standard array of shampoo, conditioner and body wash.

Mt. Hakkōda is a key landmark nearby, and there a few different hiking trails that start around Sukayu Onsen. In winter, Mt. Hakkōda is a popular ski destination. Oirase Gorge is another nice walking trail that’s a short drive away.

How do you get there?

The easiest way is to rent a car and drive from Aomori City. It only takes about 45 minutes and there is free parking at Sukayu Onsen and the nearby Sukayu Visitor’s Center.

Alternatively, there is a JR East transit bus that stops at Sukayu Onsen. For those departing from Aomori or Shin-Aomori Stations it costs ¥1,570 one-way, but is fully covered by the JR East Tōhoku Area Pass and the Japan Rail Pass. However, there are only three departures per day from Aomori City. And you should keep in mind that these servies stop between November and April. Depending on which bus route you take, the journey takes 1 hour and 15 minutes to 1 hour and 40 minutes.

Finally, there is a free shuttle for overnight guests that departs from Aomori City twice a day and takes about 1 hour. You can request this service at the time of booking.