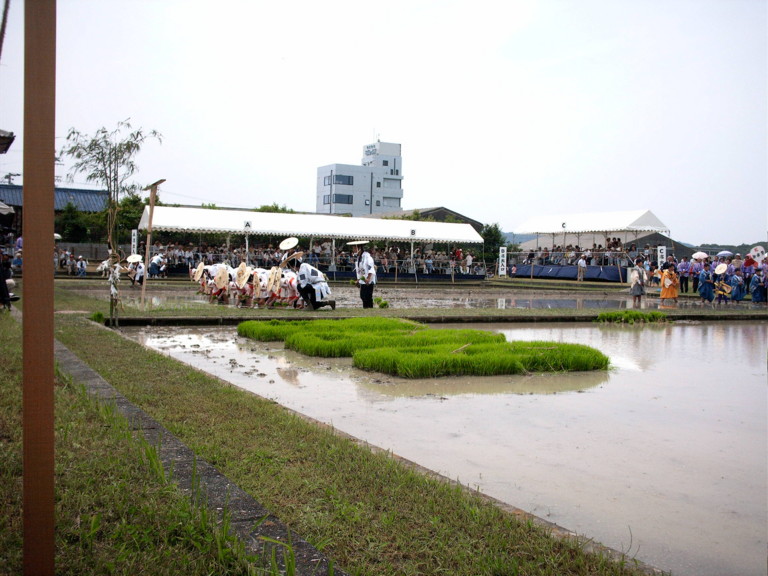 This festival takes place on June 24th each year at Izawanomiya (Izawa Shrine) – one of the 123 shinto shrines that makes up the giant Ise Grand Shrine complex in Mie Prefecture. Additionally, it’s yet another officially recognised intangible cultural asset and one of three major “Otaue” festivals in Japan each year. The others happen in Chiba Prefecture in April and as part of the Sumiyoshi Festival in Osaka.

If you’re struggling with the name, you could use the nickname that the locals use for it – “Omita”.

“Otaue” means rice planting and sowing the rice plants is one of the shinto rituals performed in order to ensure a good harvest.

Aside from the ritual planting, a large blue bamboo pole is put at the bottom of the muddy field. Teams of men in fundoshi (loin cloths) scramble through the mud to grab the pole and carry it off. It’s believed that the successful pole grabbers will be provided with safety while at sea.

The mythology of the festival involves an ancient visit by 7 sharks which swam up the Nogawa (No River) to visit the shrine. The sharks are purported to visit even now, so that local fishermen suspend their fishing – presumably so that the sharks aren’t accidentally caught. An added bonus is that they get to scramble through the mud after the talismanic bamboo pole.