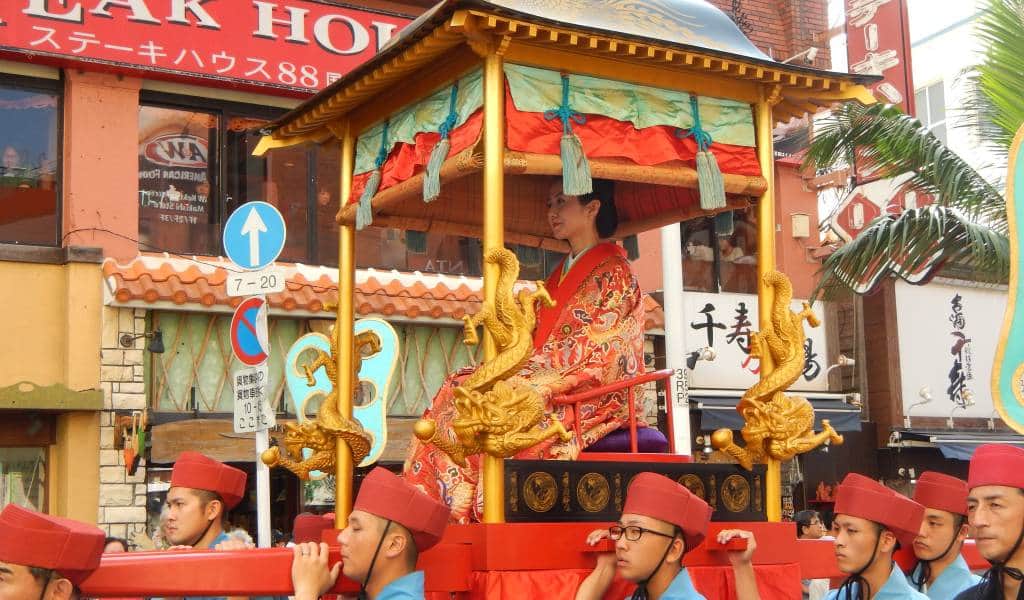 Pic: Emily Dickson
Sharing
We are yet to confirm the dates and details of this event.

Shurijo Castle Festival is one of Naha’s biggest and most important events, celebrating the legacy of the Kingdom of the Ryukyus.

There are two separate events for this festival. The first is the Ryukyu Dynasty Parade on Kokusai Dori, and the second is the Ryukyu Festival at Shuri Castle.

Kokusai Dori, the main shopping and entertainment street in the city, becomes a stage for an incredible cultural performance, as more than 700 people bring to life the culture of the Kingdom of the Ryukyus.

The festival is a reenactment of the Emaki Gyoretsu procession of the Ryukyu Kingdom. It features the Ryukyu king and queen being carried regally through the street, followed by traditional performances. The participants dress in classic Ryukyu style period costumes, full of colour and iconic island style.

The procession starts at midday, and people line Kokusai Dori to get a good spot to watch the parade as it passes by. This festival is a great opportunity for visitors to see and experience the full grandeur and elegance of traditional Ryukyu culture.

Following the parade, there’s lots of music, dances, and entertainment, that goes on all afternoon.

Note: Though Shuri Castle suffered a terrible fire in 2019, many of the castle park grounds are still open to visitors. It is not yet announced whether the festival will be held in 2020 on the castle grounds, due to reconstruction efforts.

The festival which takes place at Shuri Castle is a solemn reenactment of the procession of the Ryukyu King to the three temples near Shurijo Castle. The king would go every year to these three temples to pray for peace and prosperity. It is very striking to see the beautiful Ryukyu traditional dress with the backdrop of Shuri Castle.

To prevent the spread of COVID-19, many events have been canceled. Always check official sites before heading to an event.
Open with Maps
Oct
首里城祭
Kokusai Dori
Free
http://oki-park.jp/shurijo...
Okinawa