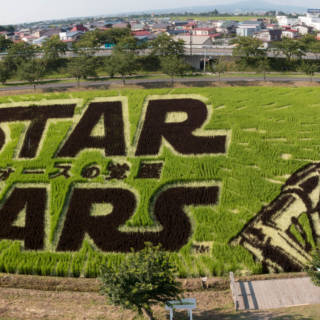 The Aomori town of Inakadate has become famous for its Tanbo Art event held from early June until early October each year. ‘Tanbo’ is a rice field, the ingenious art is created by growing different crops to paint enormous living murals.

The murals can only be viewed from up high. One observation point is the Japanese castle themed village office, while the other is a more conventional observation tower.

Both towers have separate admission prices from ¥200 and ¥500. The first field can be viewed for free from Sept 30th to October 6th. A free 9-seater shuttle runs between the two venues.