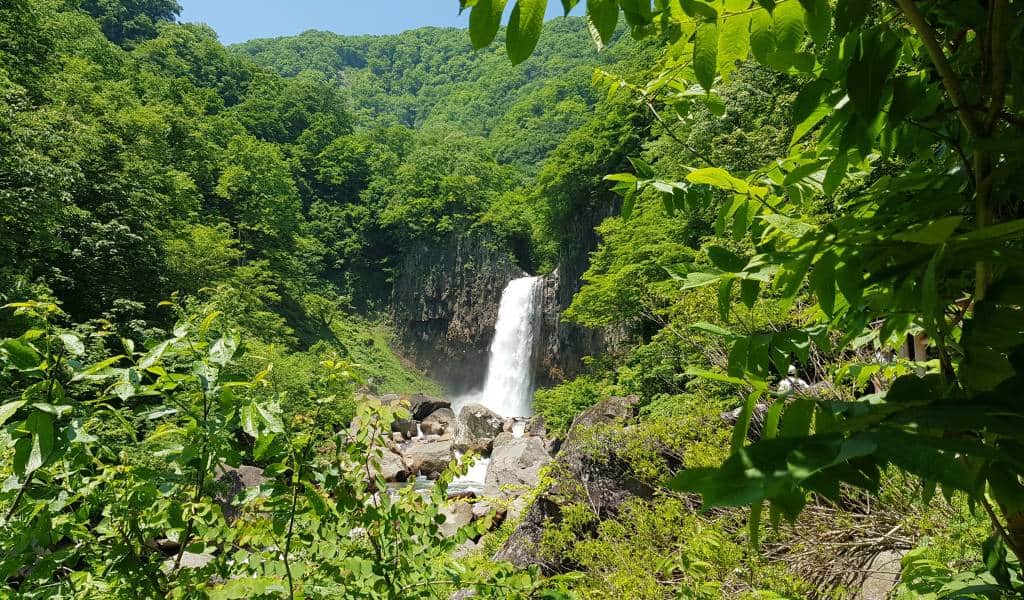 Naena Falls is a picturesque cascade on the Seki River located between Mount Myoko and Mount Kurohime withn the Myoko-Togakushi Renzan National Park. The 55 meter high waterfall is ranked among Japan’s top 100 waterfalls (yes, there is an actuall official list for this!)

The falls are a relatively easy 15 minutes walk from the free Naena Falls carpark, although you’ll need to clamber over some rocks on the way, so suitable footwear is recommended. In winter, you may need snow shoes and the short walk will take considerably longer.

The best view of the falls is from the second suspension bridge which leads to a rest area on the right bank of the river. Some clamber on to rocks in the river for a better view, but signs advise against this as the water levels can quickly rise due to the Sasagamine Hydroelectric Dam which is about 7km upstream from the falls.

Next to the parking lot, are two restaurants with outdoor terraces (for the warmer months). Cafe Gland (probably an unfortunate mispelling of “Grand”) has ice creams, coffee and light meals. The neighboring Naenataki-en has a more extensive meal selection with rice bowls, noodles, grilled fish (possibly from the river) and a refreshment menu that includes Myoko Kogen Beer. Prices at both are quite reasonable.

Unlike a lot of areas in Myoko, there is a good road that leads to the falls parking lot. The parking lot is about a 15 minute drive from the Myokokogen Interchange on the Joshin-etsu Expressway, or 10 to 15 minutes from most of the nearby ski areas. There is a Myoko City municipal bus service route called Myokosan-roku (妙高山麓 – Mt. Myoko Base) which runs to and from the falls five times each day. Although the departure point varies throughout the day, all services depart from Akakura Ginza (the main street of Akakura Onsen), Landmark (Ikenotaira Onsen), and Suginosawa Onsen.

You can ask the driver for a two-day ticket which covers all the public buses for ¥1,000 for adults, and ¥500 for kids. More info on the Myoko City website (in Japanese).